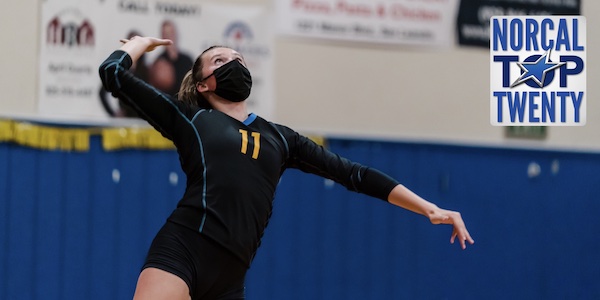 All records are through Monday, Sept. 19. Previous ranking in parenthesis.
PICTURED ABOVE: Paige Bennett of No. 8 Foothill-Pleasanton. (Jean-Paul Toshiro photo)

We knew a reshuffle was coming to these NorCal Volleyball Rankings, but that was pretty quick. With several tournaments last weekend, including the Durango Fall Classic in Las Vegas, there were a number of ranked teams that played seven matches or more last week. And going 7-0 ain’t easy, even for some of the best teams. Thus, 13 teams from last week’s Top 20 suffered losses last week.

No. 2 Mitty-San Jose took on three losses at the Durango tournament, but none were to NorCal teams so they retained their spot. Six other teams also hung to their ranking from last week, including No. 7 Amador Valley-Pleasanton and No. 8 Foothill-Pleasanton. The cross-town rivals will face either other Thursday at Amador. Another East Bay Athletic League team, Monte Vista-Danville, used a 6-0 week (including a win over Amador) to vault two spots to No. 3.

Branson-Ross, whose only NorCal losses are to the top three teams, also jumped two spots to take over No. 4. If the Bulls hope to stay there, they’ll need to win at No. 14 Marin Catholic-Kentfield tonight (Tuesday). Rounding out the Top 5 is Sacred Heart Prep-Atherton, which moved up four spots — but also has two tough league matchups followed by the Chandler Memorial Tournament at Menlo School-Atherton on Saturday.

St. Mary’s-Stockton is one of four new teams to the rankings this week, debuting at No. 6 after a 4-1 week that included two wins over previous-No. 3 Oak Ridge-El Dorado Hills. The Rams defeated Oak Ridge 3-2 in nonleague play and then 2-0 in tournament action. With those two wins, and previous No. 4 Whitney-Rocklin also losing to an unranked team (Christian Brothers-Sacramento), the Sac-Joaquin Section pecking order was thrown into disarray.

Honestly, the parity in the SJS seems extremely strong in the early going. Oak Ridge and Whitney each stay in another week — and will play each other on Thursday. Three other teams — Christian Brothers, Tracy and Vacaville — all entered the “5 Teams Knocking” category after it was too hard to separate any of the three for potential inclusion in the Top 20. They all have very similar resumes and head-to-win wins against each other.

Finally, Campolindo-Moraga and Redwood-Larkspur debut at No. 10 and and No. 15 respectively. Campolindo’s only NorCal losses are a pair of defeats to No. 8 Foothill-Pleasanton. Redwood, which went 5-0 last week, only has losses to the top three ranked teams, and Campo.