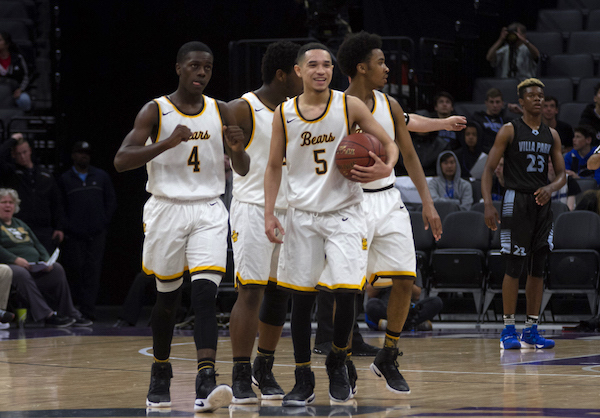 For those of you who have attended CIF State Basketball Championship games in Sacramento over the years, there have been outstanding teams in divisional finals lower than the Open Division, lower than Division I and even a few in Division IV and Division V.

James Harden (Artesia-Lakewood) and Klay Thompson (Santa Margarita) both played on boys teams that won Div. III state championships. For the girls, Piedmont’s back-to-back Division IV state titles in 2004 and 2005 with the Paris twins (Courtney & Ashley) were both for teams that were among the highest-ranked in the nation.

Even last year, Mission High’s historic run to the Div. III boys state title (pictured above) that earned the city of San Francisco its first-ever public school state title, and Eastside College Prep’s repeat in Div. V girls, showed off rosters from teams that were arguably top 25 overall in the state.

This season, though, anyone thinking that there will be teams in the Div. III, Div. IV and Div. V brackets that will be close to even the top 100 in the state better start getting used to what’s going to happen with competitive equity seeding.

This new way of seeding teams into the Northern California and Southern California regional playoffs began in November for girls volleyball. If you use what happened in that sport as a barometer for how it may work in basketball, the results were less than stellar.

Competitive equity seeding is the process of putting teams into divisions with no regard whatsoever to enrollments or with section playoff alignments. Each section essentially ranks all of the teams that are qualifying for the regional playoffs based on competitive equity, and then the CIF will base its regional divisions on those rankings.

A good example in volleyball is what happened for teams from the Marin County Athletic League in the North Coast Section. League champ Marin Catholic went to the NorCal Open Division as expected, but Branson-Ross, a team that has won multiple Div. V state titles, was placed into NorCal Div. I. In that tougher bracket, Branson had no chance. A middle of the road MCAL team, San Marin-Novato, did get into NorCal Div. V and then actually won the NorCal D5 title before losing in the state final.

Sure, the competition between the teams in the lower divisions of the new competitive equity based placements is fine. It’s just that in volleyball there clearly wasn’t a single team from Div. III or lower that probably would be among the top 100 overall in the state. Presentation-San Jose, which was battling for the cellar in the West Catholic Athletic League this season, won the Div. IV state title — and still had a losing record.

For the Open Division in girls volleyball, competitive equity seeding made no difference for the goal of the top overall teams in the state playing each other. Archbishop Mitty-San Jose repeated with a 3-0 victory over Mater Dei-Santa Ana.

The Div. I bracket in girls volleyball also featured a lot of other strong teams, but with the same problem that basketball has had in recent years and that’s that the fifth or sixth-best overall teams from the CIF Southern Section that don’t get into the SoCal Open Division teams have tended to be a lot better than other non-Open Division teams from the rest of the state.

Once you started getting into Div. II, however, some of the weaker state volleyball teams began to emerge and then in Div. III and lower there wasn’t even a State Top 20 bubble team close to be found. The CIF will point out that this new method will provide experiences for some of these schools and student-athletes that they would never have gotten before. That’s true, it’s just that the teams themselves actually aren’t that good and certainly aren’t close to being as strong as those teams many of us have gotten used to watching in some of the lower divisions.

The CIF football games in the last three years have been determined by the same competitive equity factors. It’s just that in football we’re only dealing with section championship teams (with a few runner-up exceptions). When this system gets extended into 16-team Open Divisions and more 32-team brackets, there’s just not enough qualified, strong teams to fill them out. The deeper you go, the weaker the teams get.

We’ll still heartily attend and support the CIF state championships this March. The Open Div., Div. I and hopefully Division II finals will be worth watching. Based on what happened in volleyball, however, the opportunities to take breaks during the other games will be much more frequent.