Conwright on His Game in Porsche Carrera Cup 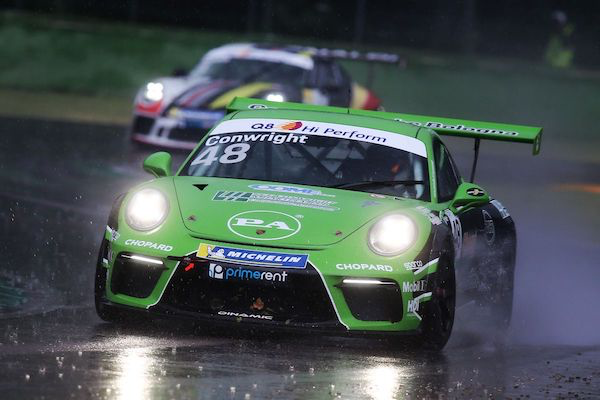 In motorsport, consistency is the Holy Grail, the quality that very often wins championships. No driver has been more consistent over the first half of the 2019 Porsche Carrera Cup Italia campaign than rising American racer Jaden Conwright. His stellar performances have vaulted him to the top of his game in the chase for the coveted crown.

A rookie this season in the fiercely-contested single-make series, Conwright is a newcomer to sportscar circles in general following a formative career in single-seaters. He has handled the transition in stride. Just eight races in, the talented young Californian is the man setting the pace in the high-caliber, 33-strong field.

A brace of runner-up finishes in the Monza curtain-raiser back in April – no more than six tenths-of-a-second shy of victory and with fastest lap to his credit in race two – he immediately set the tone. And Conwright hasn’t been outside of the top three since.

Consecutive third place finishes at Misano and Imola –and a third and second last time out at Mugello, make the 20-year-old Williams-Harfield Sports protégé the only driver to have finished in a podium position in every round to-date behind the wheel of a Dinamic Motorsport-run, 485bhp Porsche 911 GT3 Cup race car.

Having threatened to grab the top spot for some time, Conwright’s Mugello results catapulted him to the standings summit. He entered the summer break leading the way ahead of a gaggle of more experienced rivals.

When the action resumes next month, there will be six races still to run. And a tense championship battle in prospect.

The Vallelunga circuit just outside of Rome is a challenging blend of high-speed blasts and more technical sections. It kick-starts the second half of the campaign in mid September. In October, competitors head back to Misano. They’ll race the high-profile Porsche Festival and then return to Monza for the season finale and title showdown.

Less than four points currently separate the top three in the overall class. Conwright is seeking to defend a slender one-point advantage over his nearest pursuer.

Having seized the initiative, he made it clear that he has no intention of relinquishing it as he chases a place in the 2019 Porsche International Shootout – the winner of which will be inducted into the prestigious Porsche Junior Program in 2020.

“With the championship being so tight, it’s certainly going to be an exciting end to the season,” affirmed the former World Speed Motorsports Rising Star / VMB Scholarship Award-winner and F3 Asian Championship certified by FIA front-runner. “My aim back at the start of the year was to push for podiums and wins. Having ticked the first of those boxes, the second can’t be far away. We’ve been very close on a number of occasions, so I have no doubt it will come.

“It’s never easy for a driver to race far away from home. Particularly with language barriers. But I credit my Dinamic Motorsport team and the Porsche Scholarship Program coaches. They have been the key to my rapid acclimation. I also believe the Program has enabled me to avoid the usual rookie errors and catch on pretty quickly.

“Having access to my teammates’ data has similarly helped to bring me up-to-speed. One of the benefits of having multiple cars in the team is that you can try things out more easily and make swifter progress! You also want good drivers alongside you as it forces you to raise your own game. And after fighting for the championship himself last year, Diego Bertonelli has been an excellent benchmark.

“The competition throughout the Porsche Carrera Cup Italia is extremely strong, especially towards the sharp end of the grid. I’m up against a lot of fast drivers with significantly more experience than me in the car, the championship and GT racing in general. With everybody having the same equipment at their disposal, it all comes down to set-up, skills and ability behind the wheel. That’s what produces fantastic racing!

“It’s true that I already knew the circuits from my year in Formula 4 in 2016. This is where prior track knowledge can be a double-edged sword sometimes. My experience was in an open-wheel car, whereas the Porsche is obviously a sportscar. You can’t even begin to compare the two.

So while I do have references, they don’t necessarily mean very much. The speeds, the weight, the braking points, the whole perspective is just different. So there has been a lot to re-learn.

“Of the remaining rounds, Vallelunga is the only track I’ve not driven in the Porsche before. But we have a pre-event test to get used to it. We went well at Misano and Monza earlier in the season, so I’m feeling confident.

“Naturally I’d prefer to have more of a buffer in the championship, but the reversed grid format for race two in the Porsche Carrera Cup Italia makes it difficult for anybody to pull out much of a lead. At least we have the points in the bag. I’m happier being the hunted rather than the hunter – like in a race situation, it’s easier to try to stay ahead than needing to overtake and now the pressure is on the others to catch me.

“My plan is to maintain the same approach over the final three events, and to put to use everything I’ve learned over the first half of the season. This is where it gets serious. We’ve played it relatively safe up to this point, trying to balance risk against reward but it’s reaching the stage where we need to push the envelope a little bit.

“The intensity will only increase as the stakes rise, and there’s no question that it’s going to be an incredibly hard-fought battle. I’m preparing for a real fist fight out there, and I suspect the eventual champion will be the one amongst us that makes the fewest mistakes. The gloves are about to come off…”

Conwright’s manager at WH Sports, Giacomo Sgarbossa, is effusive in his praise for his promising young charge, and optimistic of a strong title challenge over the final six races.

“The impact that Jaden has had in the Porsche Carrera Cup Italia has exceeded all expectations,” he acknowledged. “Dinamic Motorsport are doing a brilliant job and are one of the best teams we have had the pleasure of working with – their appreciation of Jaden and the atmosphere inside the team are amazing, making this season both productive and enjoyable. We feel very much part of the family.

“Eight top three finishes in a row is an incredible achievement for a rookie, especially since the Porsche Carrera Cup Italia is one of the most competitive championships across Europe, with five different drivers and four different teams claiming at least one victory from the opening eight rounds.

“We have yet to win a race, but that’s not a drama for us. Jaden’s remarkable consistency has deservedly earned him the top spot in the championship anyway, and we need to remain patient and keep building from one round to the next, continuing to be at our best on-track. At WH Sports, we all hope Jaden will be able to keep this momentum rolling. His work ethic reflects our shared values, and he is a great ambassador for our company.”