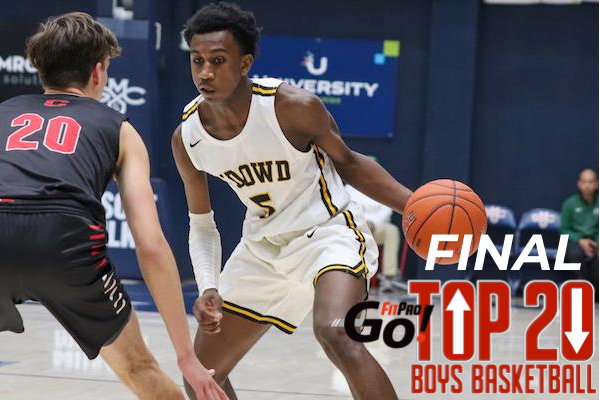 Denied A Shot At Both A Regional And State Title, Bishop O’Dowd Still Finishes No. 1 In Our Final NorCal Boys Basketball Rankings •

The Dragons first time at No. 1 this season comes in the final ranking. They were denied a shot at No. 3 Sheldon-Sacramento when the NorCal Open final was cancelled along with the rest of the CIF postseason. Prior to that, O’Dowd defeated sitting No. 1 Mitty in the regional semifinals. The Dragons finished the season 18-0 vs. NorCal opponents. (PICTURED ABOVE: Marsalis Roberson. Berry Evans III photo)

In the absence of a head-to-head with Sheldon, we gave the Monarchs the edge based on winning a Central Coast Section Open Div. title in a field that included five teams within the Top 15 of our final rankings.

It was a rollercoaster of a CIF postseason for the two-time defending NorCal Open championships. Nearly forced out of the tournament when its district shutdown over COVID-19 concerns, Sheldon was able to get back in for one more game and earn a 59-58 comeback victory over No. 4 Dublin.

Devon Jackson was part of a senior class that helped turn the Gaels into an East Bay power. (Berry Evans III photo)

Another stellar year for Tom Costello’s team included eight wins over teams among our final 20. The Gaels came up three points shy of No. 1 Bishop O’Dowd in the North Coast Section Open Div. final, but rebounded to defeat No. 5 Bellarmine in a NorCal Open first round game.

Bells were probably the best team that got the littlest fanfare this season. They had a 68-56 win over No. 2 Mitty and topped No. 12 Serra twice, including a stunning 65-14 result.

The Crusaders were the top seed in the CIF Div. I bracket. But after winning their first two CIF Div. I regional contests, they were forced into a virus-related bow out before getting a shot at No. 8 De La Salle.

De La Salle’s Chris Bunch is among 12 players who can return to the Spartans next season. (Berry Evans III photo)

The NCS Div. I champs’ season ended with a 54-49 loss to No. 7 Campolindo in the NorCal Div. I final. A 55-52 head-to-head win kept them one slot above Capital Christian-Sacramento.

Every one of the Cougars’ six NorCal losses came against teams from these final Top 20 rankings, including two to No. 4 Sheldon.

Salesian has gone 56-8 over the past two seasons. (David Gershon photo)

There was no 31-0 start for the Pride this year, but the program remained as consistent as ever. Salesian’s season ended with a 60-59 loss to No. 7 Campolindo in the NorCal Div. I semis.

The Wildcats were as high as No. 4 in mid-February before a knee injury to Montana-bound senior Robby Beasley derailed their season.

This group began the year as our Preseason No. 4 and were out the rankings by January. But veteran leadership steadied the ship and led the Cougars to a Div. II NorCal title.

Three of the Bears’ five losses came against No. 2 Mitty (twice) and No. 5 Bellarmine. Their season ended in a CIF Div. I-quarterfinal loss to No. 8 De La Salle.

Strength of schedule and wins over No. 11 Dougherty Valley and No. 6 Riordan assured the Padres of a Top 15 finish.

A CIF Div. I first-round win over previously-ranked San Leandro gave the Pacers a second-straight season of at least 26 wins.

Before their season ended in a 76-62 CIF loss to No. 6 Riordan, the Vikings put together a resume that included a win over No. 9 Capital Christian.

Outside of De La Salle and Dougherty Valley, no East Bay Athletic League team was more consistent than the Matadors. Granada finished as NCS Div. I runners-up to DLS.

Injuries never really let the Crusaders reach their full potential in 2019-20. They did compile mid-season wins over ranked teams such as Oakland Tech and Gregori-Modesto.

The Bulls claimed the last spot over Div. III NorCal champ St. Mary’s-Berkeley thanks to wins over No.12 Weston Ranch and the Piedmont team that defeated St. Mary’s in the NCS Div. IV final.