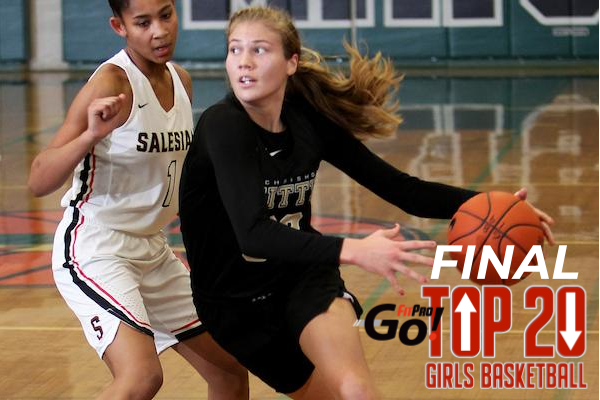 Unlike The Ambiguity Of Our Boys Final Rankings, Mitty Is A Clear No. 1 In Our Final NorCal Girls Basketball Rankings •

There’s no doubt the Monarchs were the best team in Northern California, and coach Sue Phillips and company would have liked nothing more than to prove their worth against No. 1 in the nation La Jolla Country Day in the Open title game. Expect more of the same next year, as only two seniors graduate. (PICTURED ABOVE: Hunter Hernandez. Dennis Lee photo)

Despite midseason turmoil after the departure of coach Shawn Hipol, the Pilots rolled all the way to the NorCal Open finals, where they couldn’t get past Archbishop Mitty. And note that of those eight losses, three came against the Monarchs.

The Dragons’ trip to the state championship game was another casualty of COVID-19, but coach Malik McCord and his team didn’t need anything else to validate a Top 3 spot in these final NorCal girls basketball rankings. And like Mitty, the bulk of the firepower returns next year.

Anya Choice carried a lot of the load for the Cardinals, and she carried it a long way. The North Bay’s finest knocked off St. Mary’s-Stockton before falling, like everyone else in Northern California, to Archbishop Mitty.

Daylee Dunn averaged 8.1 points per game for Salesian and was one of just two seniors on the 2019-20 roster. (Gint Federas photo)

This year was supposed to be a step back for the Pride after graduation depleted the roster, but the young team stepped forward, only losing by two to Bishop O’Dowd in the NorCal Division I final. And this year, only two seniors graduate.

Some things never change. The Rams are always loaded with talent and are one of the best programs in California. This year, in fact, the biggest loss to a California team was five points. Feel free to pencil them into the 2020-21 final NorCal girls basketball rankings.

Yet another team with plenty to look forward to, Pinewood returns all but one player from a 25-win team that knocked off Miramonte-Orinda in the first round of the NorCal Open.

That Matadors were a first-round loser in the NCS Open after posting another fine season, and had wins over both No. 3 Bishop O’Dowd and No. 7 Pinewood.

Menlo was one of the first teams to withdraw from the postseason due to COVID-19, missing a date with No. 3 Bishop O’Dowd. Still, a year that included a win over No. 7 Pinewood and a Top 10 ranking counts as a very successful season.

Abby Muse closed out her Heritage career, but her sister Amanda will anchor the Patriots for three more seasons. (Chace Bryson photo)

Backcourt injuries had a major impact on the Patriots. Though the perimeter threat wasn’t there, sister act of Abigail and Amanda Muse still powered Heritage into the NorCal Div. I quarterfinals.

The quest for a second straight state title — this time in Division II rather than Division IV — was denied by the pandemic. However, Tech has clearly established itself as one of NorCal’s premier programs.

John Cristiano has built a powerhouse in the Wolves, and the word is that the middle schools are filled with up-and-coming talent — and only three seniors graduate.

One of the best scorer’s in NorCal, Jzaniya Harriel will be back to power Antelope in 2020-21. (David Gershon photo)

Jzaniya Harriel is just a junior, and so the high-scoring, multi-talented guard will continue to torment opponents next year. The lineup around her will be restructured, but don’t expect much of a dropoff.

The Trojans stormed their way into the Sac-Joaquin Section Div. I final before losing to No. 6 St. Mary’s 56-45. No. 9 Menlo edged them 50-47 in the first round of regionals.

Only eight teams in NorCal won more than 26 games this year. McClatchy has averaged that many every season since 2012-13.

Yes, the Golden Eagles had 11 losses, but those losses came at the hands of very good teams. Also, the 35 games were the most played by any NorCal team this year.

The Eagles have quietly become a dominant program in the Hayward/Fremont area. The schedule wasn’t quite as strong as some other teams, but expect that to change next season.

The Panthers were left hanging, like Mitty and Oakland Tech, just one win away from a state title. After a brief lull, St. Mary’s is back among the East Bay elite.

Laila Barron was one of four freshmen to play for Laguna Creek this season. The roster also included seven sophomores. (David Gershon photo)

As the youngest team on this list, by far, the Cardinals’ late-season stumbles can be forgiven. Next year, there will be no excuses.

While 16-10 is a long way from an unbeaten season, a win over No. 9 Menlo and a convincing NorCal victory over San Leandro earned the Gators this last spot.