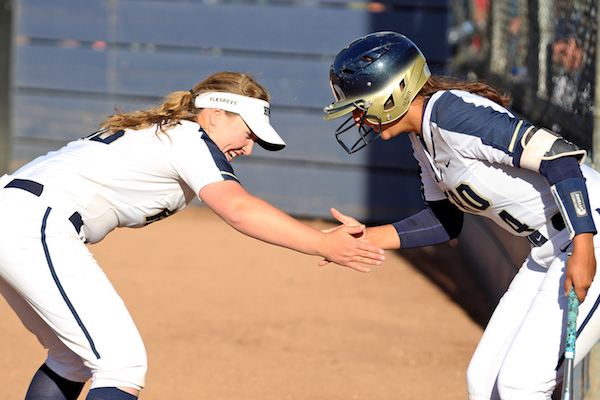 The team mission adjusts pitch-by-pitch to the calls of assistant coach Jake Lively, corresponding with color-coded commands on each player’s arm band.

Play is often stalled to discuss strategies with coaches, and players who finish an at-bat will often share pitching analytics with the next batter.

The campaign even has its own hashtag.

“We call it #18strong,” Buck said. “All of us are working together, players and coaches, to achieve our goals.

“If we can trust each other, we can respect one another. If we want good things to happen for each other, then they will. We have had a successful season with that motto.”At

The targeted efforts are bolstered by masterful communication, in the field, at the plate, and in a stentorian dugout so loud, each pitch becomes a spectacle.

At home, the Elk Grove High softball momentum builds when each player’s carefully-selected walkup music begins. Junior slugger Angelica Cano strides to the plate to the tune of “Lean Like A Cholo.” As she gets her elbows up and leans side to side, the clamor of raucous jeers and cheers from her dugout thunder toward the field of play.

Some girls will shout words of encouragement, a few will bellow war cries, and many will speak in a sort of never-ending cheer-language that never reaches discernible speech.

It doesn’t really matter what is said. The tone and volume build toward a crescendo at the fastpitch follow-through.

Each at-bat is a symphony, and base knocks earn standing ovations.

Buck and Co. directed nearly 200 of those through the first 19 games (combined .383 batting average). Elk Grove won 12 of its first 15 and knocked off section power and Delta League rival Sheldon-Sacramento on April 20.

Elk Grove has been as high as No. 4 in the SportStars NorCal Softball Top 20 Rankings.

“They have fun, and they work hard, too,” Buck said. “This is one of the hardest working teams I have had in 13 years.

“They can make us laugh! They are all about getting the job done and putting in the extra work. It’s what makes us want to come to practice.”

The squad will send at least six girls to compete at the next level.

She said the team’s competitiveness is its biggest strength.

“We just want to fight and win and get a (section championship) ring,” Cano said. “We are all coming together as a team.”

The stars shine in Buck’s system, and quickly learned to navigate the play calls that adjust their defensive positioning, pitch calls and hitting strategies before every rotation at the mound.

It makes the whole team look like NFL quarterbacks for a brief moment each play; the messaging is efficient.

“The arm bands make it less likely for any chance of a miscommunication,” Buck explained. “These are smart ball players who have been playing their whole lives, and they know how to adjust.”

Elk Grove High Softball will likely qualify for the playoffs for the 12th consecutive season this spring.

The squad dropped contests against Sheldon and Davis April 19 and 24, but closes the regular season with five foes the team has already defeated.

A potential 12-2 league record and top-two seed from the league should give the Herd a favorable seed in the Division 2 bracket.

It’s become the way to navigate through the Delta League, where players should earn college credit for their mastery of communications.