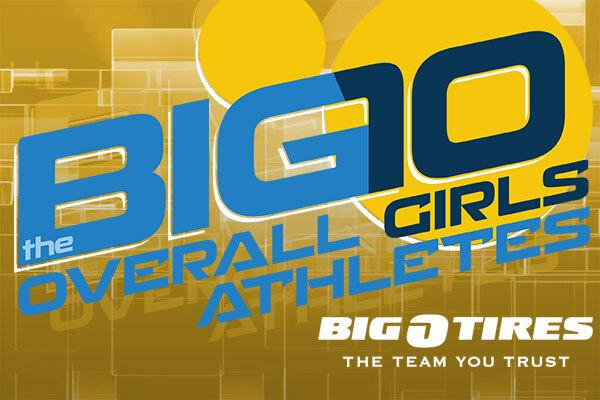 For The Magazine’s 10th Anniversary Issue, SportStars Continued Its Big 10 Series With The Overall Girls Big 10 —NorCal’s Best Female Athletes Of The Past Decade •

The Overall Girls Athlete Big 10 is an installation of the SportStars Big 10 Project: A 10-months-long anniversary project celebrating the magazine’s 10-year anniversary in June 2020. We’ll be releasing lists of the Top 10 players and teams of the SportStars Era from across several sports all the way through October. Big 10s that have already been released: Girls Volleyball Players, Girls Golfers, Girls Wrestling, Boys Wrestling, Boys Swimming and Girls Swimming.

When we began this 10-months-long anniversary project, we looked at this specific list (along with the corresponding boys one) with a fair amount of dread. Just what made us crazy enough to think we could narrow down 10 years of phenomenal NorCal female athletes to a list of just 10 names?

Obviously, these lists are meant to have fun with and be conversation starters. Can a case be made for different athletes to be on this list? Absolutely. Just listing the honorable mentions made us blush.

That being said, we feel pretty good about these next 10 athletes. We tried our best to balance high school impact and success with the player’s collegiate and professional prowess as well.

Perhaps most importantly, each of the following athletes were great kids to deal with. They returned texts and calls. Answered endless questions. Stuck around for that extra half hour to let our photographers get that perfect shot. They’ve all been easy to root for in their post-high school careers. We certainly consider ourselves lucky to have had a platform to amplify their talent.

Despite having played just three full seasons at the University of Washington, Bates was recently voted onto ESPN’s All-Time Collegiate Softball Team. Let’s first start with a Ceres High career that ended with her being named Cal-Hi Sports’ Ms. State Softball after a senior season in which she hit .571 for the Sac-Joaquin Section Div. III champions, and put her name in the state record book for career runs scored (171) and career hits (205). In three-plus seasons at Washington, Bates has a career batting average of .384 with 172 runs and 113 RBIs in 202 games. She’s a two-time National Fastpitch Coaches Association First-Team All-American, and a two-time Pac-12 Defensive Player of the Year. Ceres landed on the US Women’s National Team following her sophomore year in 2018. (And she also played hoops in high school, averaging 18 points as a junior).

Boyd was an absolute force in high school. After getting just half a sophomore season with Berkeley due to transfer rules, she spent her junior and senior seasons leading the Yellowjackets to a combined 58-6 record and claiming two North Coast Section titles and a CIF NorCal title. She averaged 15.7 points, 6.7 steals, 6.2 rebounds and 5.4 assists as a senior. She stayed in Berkeley and attended Cal where she was named to the All-Pac12 team and All-Pac12 Defensive team three times each. Boyd became the conference’s first player to reach career totals of 1400 points, 700 rebounds, 600 assists and 300 steals. The New York Liberty made her the 2015 WNBA Draft’s ninth overall selection.

It was just weeks before we published our first issue when Chenault burst onto the high school swimming scene with four NCS titles and record swims in the 200- and 500-yard freestyle — as a freshman. Her senior times in those events remain the current records. She graduated with her name on five NCS records — she is also part of the current 200 medley and 400 freestyle relay top marks — and claimed 12 NCS titles with the Cougars while helping set two national relay records. Chenault competed for Team USA and won FINA World Championship golds in 2013 and 2017 as a member of the 800 freestyle relay team. At USC she set the Trojans’ 200 freestyle record as a junior. She also won two Pac-12 titles and an NCAA title.

Ionescu is arguably the most popular female basketball player in America right now. She was the No. 1 overall pick in the WNBA Draft last April. Her New York Liberty jersey sold out within six hours of her selection. Before becoming a household name at the University of Oregon, Ionescu led Miramonte-Orinda to three straight 30-win seasons, three NCS titles and one CIF NorCal Open Div. championship. Her senior year she averaged 28.5 points, 9.7 assists, 8.3 rebounds and 5.5 steals for a 32-1 Matadors team that lost its only game in the state final. In four years at Oregon, Ionescu rewrote the NCAA and Pac-12 record books. She’s the first player in NCAA history (male or female) to reach 2,000 career points, 1,000 career rebounds and 1,000 career assists. Her 26 career triple-doubles dwarf the previous NCAA record for male or female (12). She won every major national player of the year award as a senior.

Not only was Jones the first female to finish No. 1 in SportStars’ annual ranked list of the Bay Area’s top 75 athletes, she did it in back-to-back years. Upon Ionescu’s 2016 graduation, Jones immediately took on the mantle of the Bay’s best player. In four years, she led Mitty to 105 wins, four Central Coast Section titles and one CIF NorCal Open title. She was considered the nation’s No. 1 recruit by her junior season and graduated as Mitty’s all-time leading scorer (2,127 points). Her senior year was her most dominant, as she averaged 26.1 points, 12.1 rebounds, 4.4 assists and 3.7 steals. She earned her second Gatorade State Player of the Year honor after that season. USAToday.com named her California State Player of the Year, and Cal-Hi Sports anointed her Girls Athlete of the Year. Despite playing just 18 games in an injury-shortened first season at Stanford, Jones earned Pac-12 Freshman of the Week honors three times.

Her four-year varsity career was great, but Nelson would have gained consideration for Overall Girls Athlete Big 10 based on her senior season alone. She had 46 assists in a four-set state finals victory (to complete a 45-0 season). She finished 2013 with 996 assists, 192 kills, 135 digs and 90 aces. Nelson was named PrepVolleyball.com’s National Player of the Year, CalHiSports.com’s Ms. State Volleyball and Gatorade’s State Player of the Year. Nelson attended Cal Poly where she closed her four-year career as the 2017 Big West Conference Player of the Year. Her 4,280 career assists for the Mustangs rank second on the program’s all-time list. Her 1,196 assists in 2017 rank ninth. Nelson spent 2019 playing professionally in Germany.

There was no distance runner more dominant over the magazine’s first 10 years. When we create our Big 10 lists for cross country and track & field, O’Keeffe will have a strong case to appear on both. Her addition to the cross country list will be a no-brainer. O’Keeffe won two Div. I titles and never finished worse than eighth in four CIF State Cross Country Championship meets. She owns two of the Top 10 fastest times (across all divisions) on the Woodward Park course in Fresno. In track and field, O’Keeffe won a CIF state title in the 3,200 meters as a senior. She also had a runner-up finish as a junior. One month after graduating from Davis, she obliterated the meet record while winning the 5,000 meters at the U.S. Junior Nationals. She’s already a six-time All-American in three seasons at Stanford, and is coming off a junior season in which she won the Pac-12 Cross Country championship and was named the conference’s Female Athlete of the Year in the sport.

Rood makes the Overall Girls Athlete Big 10 as its one true two-sport star. She was a four-year varsity player in both softball and soccer at Monte Vista. And while softball was her “primary” sport, she could’ve easily gained a Division I scholarship for soccer as well. She netted 37 goals and added 16 assists over 74 games for the Mustangs. She tied for the team lead in goals as a senior, and was second on the team as a junior when Monte Vista won an NCS title and closed the year ranked No. 1 in the nation by StudentSports.com. She ended her Mustangs softball career by hitting .529 with 17 extra-base hits and 19 RBI. She went on to become a four-time All-Pac12 selection for Cal with a career batting average of .361 after 710 at bats. Her 50 career doubles are the most in Cal history, and her 189 runs and 96 stolen bases both rank second.

The very first girls athlete we ever honored, Steffens was our East Bay Fall Sports Female Athlete of the Year. She was our cover athlete for issue #10 in October of 2010. Approximately a year and a half later, everything stopped in the SportStars offices when the U.S. Women’s Water Polo team took the pool during the 2012 Summer Olympics. Steffens wasn’t just part of that team, she powered it — all the way to a gold medal. She tied an Olympic single-game scoring record with seven goals in her first Olympic match. She scored 21 goals in the tournament, and was named its MVP. Steffens was a FINA Women’s Water Polo Player of the Year before even enrolling in college. She did it all over again in 2016, leading the U.S. to Olympic gold in Rio and again winning tournament MVP after 17 tournament goals on just 24 shots. Her Stanford career ended with a game-winning goal in the 2017 NCAA Championship. Her 229 career goals rank third in both Stanford and conference history. When we started researching the Overall Girls Athlete Big 10, she was the first name we wrote down.

Wallace was a hurdles and field event double-threat during three year at Holy Names High in Oakland and then her senior year at Castro Valley. That senior year with the Trojans she won double-gold at the CIF State Track & Field Championship meet for the second straight year. She defended her state titles in the 100-meter hurdles and the triple jump, becoming the first East Bay girl to ever repeat at state in the same two events. She also repeated as the State Girls Track & Field Gatorade Athlete of the Year. Her four-year Oregon career was just as impressive, capped with an NCAA indoor championship in the 60-meter hurdles. At the Pac-12 Championship from 2014-16, the nine-time All-American never finished worse than second in the 100 meter hurdles (one title) or worse than third in the triple jump (one title).