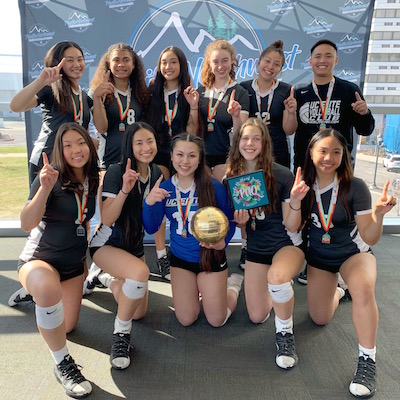 Precisely the spike that was needed! UC ELITE Volleyball Club of Union City and Hayward secured a national spot with a Pacific Northwest Qualifier win this weekend in Spokane. It’s the teams first bid to the Jr. Nationals since its 2015 inception.

According to head volleyball coach, Matt Guzman (also James Logan VB coach), “this achievement might be the first bid to come out of our local area — the (Union City, Fremont, Hayward) Tri-City.”

Guzman’s roster consists only of local girls from the Tri-City and neighboring high schools.

The Road to Jr. Nationals is Paved with a 10-0 Record!

Team UC ELITE 16 Matt finished undefeated and won the 16 American Division at the 2019 Pacific Northwest Qualifier in Spokane, WA. Earning a national bid to the 2019 USA Volleyball Junior National Championships in Indianapolis, IN.