Fueled By Recent Successes And Failures, The Christian Brothers Falcons Take Aim At Their First Section Title In More Than 35 Years •

Players for the 2017 Christian Brothers football team do not remember the program’s last Sac-Joaquin Section championship. The current players were not even born yet when the Falcons claimed Division I titles in 1981 and 1983 — the school’s only football section titles.

However, coach Tyler Almond’s squad has plenty of recent memories to fuel them to what they hope will be a deep postseason run. 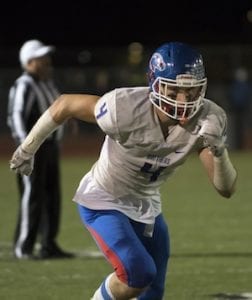 Spencer Webb runs his route during the team’s 38-31 win over Vista del Lago on Nov. 3.

After hanging on to a slim seven-point lead in the late stages of their Nov. 3 season finale with Vista del Lago-Folsom, senior tight end Spencer Webb admitted he and his teammates could not help but think about their heartbreaking season-opening loss to Manteca in the waning moments of the victory. The Falcons led the Buffalos in the opener with less than a minute to go before Manteca quarterback Gino Campiotti gutted out the win with a touchdown pass and two-point conversion toss to record a 36-35 win.

“I feel like this is the first game since the (early season) where we actually had to see where our heart is,” Webb said of Christian Brothers’ 38-31 victory over Vista del Lago that clinched the Capital Athletic League crown. “We kept saying, ‘Remember Manteca…Remember Manteca. It was always in the back of our heads.”

Webb and quarterback Gunnor Faulk made sure there would be no more bad memories to dwell on heading into the playoffs. The pair had a memorable night with Faulk recording his first career 300-yard passing game and accounting for all five Falcons touchdowns. He threw four touchdown passes, including two to Webb, and ran for another score to increase his season totals to 38 passing TDs and five rushing scores against just 4 interceptions.

Webb finished the game with 11 catches for 210 yards, two TDs, and a pair of two-point conversion receptions. For the season, he leads all section tight ends with 829 receiving yards and 20 touchdowns.

The victory in the regular season finale gives Christian Brothers an eight game winning streak to carry into the postseason along with plenty of confidence to face a stacked Division III field. While Faulk and Webb headlined for the Falcons all season long, they received lots of help from supporting players. Junior wide receiver/defensive back Tyler Green, was seldom thrown at after picking off 12 passes in 2016, and he contributed 34 catches for 566 yards and 13 TDs to one of the section’s most potent aerial attacks.

Junior Tyler Green is a two-way weapon for the Falcons.

“We have a lot of playmakers on this team,” Webb said. “I don’t have to have all of the passes thrown to me because I know that we have guys who can get the job done running the ball or catching it.”

On the defensive side of the ball, seniors Connor Laffan and Jake Regino turned in solid efforts against Vista del Lago as they had all season. Regino finished the regular season with a team-high 90 tackles (after recording 94 tackles as a junior), and has added two sacks and a pair of interceptions from his linebacker position. Laffan, who plays on the defensive line alongside Webb, leads the Falcons with nine sacks, which include back-to-back sacks of Eagles’ quarterback Grant Patterson to halt Vista del Lago’s final attempt at stealing the CAL title from Christian Brothers.

The league title is the second consecutive for Christian Brothers and the Falcons have won their last 10 CAL contests, including a perfect 5-0 mark under first-year head coach Almond, who took over for retired legend Dan Carmazzi.

“We are playing well, but we still have a lot of improvement to make,” Almond said of the playoff grind ahead of his team.

The Falcons have recent memories from last season that both instill confidence and motivation for this year’s playoff run. Like this season, the 2016 Christian Brothers team lost its first two games before going on a winning streak. The Falcons won 11 straight last year before  being derailed in the Div. III section final—the program’s first section championship game appearance since 1986. 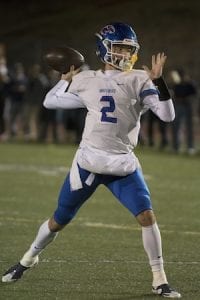 Gunnor Faulk accounted for more than 40 touchdowns over his team’s first 10 games.

Christian Brothers, the No. 3 seed, fell to top-seeded Oakdale in the section final, 50-14, creating another painful memory that drives Faulk and company to make it one step further. The two schools hold the same seeds in this year’s field, setting up a potential rematch and a shot at redemption. Before that can happen, though, Christian Brothers will potentially have a chance to atone for that season-opening loss to Manteca in the semifinals. The Buffaloes are the No. 2 seed.

Motivation aside, the Falcons’ talent and competitiveness can carry them to heights not attained for more than 30 years. And Almond says the right guy is leading his team.

“I don’t know if I have run into a more competitive person than him,” Almond said of his quarterback. “He finds a way, wills a way, to do it. He’s an undersized quarterback with a ton of heart, extremely talented. We’re in good hands when the ball is in his hands.”

DIVISION III GLANCE
Championship Pedigree: Returning Division III section and state champion Oakdale heads the bracket, which features a total of four league champions in the top-seeded Mustangs (Valley Oak League), No. 3 Christian Brothers (Capital Athletic League), No. 4 Patterson (Western Athletic Conference) and No. 7 American Canyon (Solano County Athletic Conference).
Dual Threats: Faulk has thrown for 1,972 yards and rushed for 568 for a combined 2,540 yards and 43 TDs, but he is not the only quarterback in the division that can make defenses pay with his arm and legs. Manteca senior Gino Campiotti totaled 1,892 yards of offense (1,689 passing; 203 rushing) and 24 TDs. The Div. III leader in combined yardage from under center is Patterson’s Gabe Sanchez who has thrown for 2,224 yards and 32 TDs in addition to 854 yards rushing and four more scores.
Can’t Be Corraled: Oakdale’s lone loss of the season came in a home nonleague contest at The Corral, but few expect the Mustangs to be contained when playing within their division. SJS Div. I top seed Folsom was the only team in the last 17 games to beat Oakdale and the first team to beat the Mustangs at The Corral since Manteca defeated them in October of 2013. In the last 14 seasons (including the 2017 regular season), Oakdale is 82-7 at home and the road to the championship at Lincoln High School in Stockton goes through the little town with the big home-field advantage.