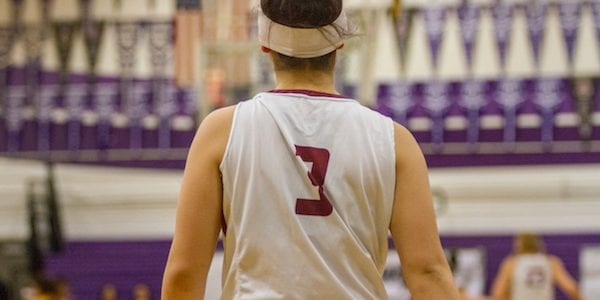 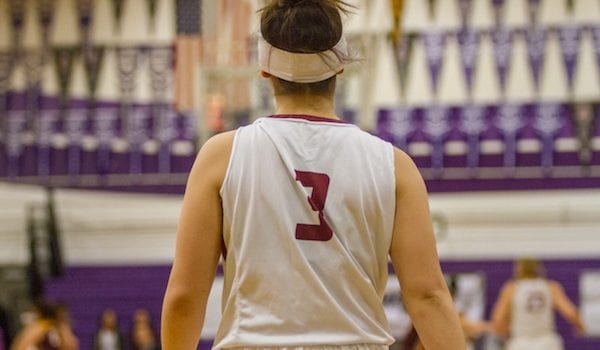 Cardinal Newman High: Out Of The Fire

October’s Devastating Tubbs Fire Erased Her Home And Ravaged Her School — But It Couldn’t Damage The Spirit Of Cardinal Newman’s Maiya Flores. • 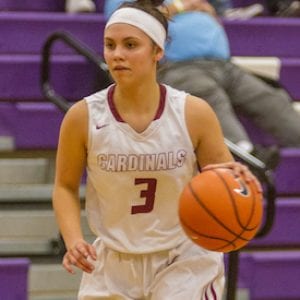 Fans who witnessed Cardinal Newman High play in its West Coast Jamboree championship game on Dec. 30 didn’t just see a top-notch girls basketball team in action. They experienced a genuine heartfelt postgame moment that transcended anything that has just occurred on the court.

There weren’t many dry eyes in the College Park High gymnasium when senior guard Maiya Flores was presented with a plaque for the tournament’s Jim Capoot Memorial Award. In this truly emotional moment, the public address announcer became choked up while presenting Flores during the post-game ceremony.

Flores, who scored 22 points in the 68-51 Jamboree Diamond Division championship game loss to Dimond of Anchorage, Alaska, has continued to thrive on the court after the October wildfires that devastated the North Bay Area hit her particularly hard.

She and her family lost their home in the Tubbs Fire, a blaze that destroyed more than 5,000 structures over three counties and carved a particularly gruesome path through Santa Rosa. That path included Cardinal Newman’s campus, which suffered significant damage.

“You face challenges your entire life,” Flores said after the game. “This is just an obstacle in the road. It will make us stronger people as we get older. For me personally, I lost everything. So, it makes me feel so humble and grateful for everything I have, and all my teammates.”

The Capoot honor is named for the former Vallejo High girls basketball coach and Vallejo Police Department officer who was killed in the line of duty in 2011.

“It’s always impressive to see how young people can rise to the challenges of life, but what Maiya Flores has done is truly exceptional,” said West Coast Jamboree co-tournament director Clay Kallam. “The Jim Capoot Award was really meant for players just like Maiya, and she exemplifies the attributes the West Coast Jamboree looks to celebrate.”

For Flores, her teammates’ support has been vital since she lost her home.

“Checking in on me every day, wishing me the best, giving me anything I need,” she said. “Just being there for me mentally, and just being all-around good people.”

And more so than ever, basketball is an important outlet for her.

“It’s a good way for me to get everything off my mind,” Flores said. “Obviously everything that has happened has taken a toll on me and my family, and the 89 other students at my school (who lost their homes), but I know it will make me a better person in the long run.”

Cardinal Newman students have been taking classes at other area schools and sports teams are competing at various local sites. Meanwhile, portables are being set up for students to return to their own campus on Jan. 22.

“We cannot have mass amounts of people on the campus because it’s not safe,” Cardinals coach Monica Mertle said. “So about three weeks ago we were able to have our first practice in our gym. We can only have small groups, so that’s where we’re at right now. … Hopefully at the end of January we’ll be back on campus. And we’ll be able to play some games in our gym.”

The Cardinals are no strangers to success at the state level, winning the North Coast Section Division IV championship and being selected to play in the CIF Open Division last March for the first time. They went all the way to the NorCal finals, where they lost to Archbishop Mitty-San Jose. They won the state Div. IV title in 2016.

To reach the Diamond Division finals, Cardinal Newman beat St. Francis-Mountain View 72-34 and Sacred Heart Cathedral-San Francisco 63-56. But the Anchorage team eventually powered its way to a win in an often contentious championship game, bringing its record to 7-0. Cardinal Newman is 9-3 and closed 2017 ranked No. 6 in the SportStars NorCal Top 20 rankings.

“We got better over the course of the tournament,” Mertle said. “I was happy with our effort. It would have been nice to get out of here with a win but (Dimond) is a really good team.”

Flores provides senior leadership on a Cardinals team that’s much younger this season.

“Maiya is doing a great job, she’s a great leader and she deserves it,” Mertle said. “She’s focused, she cares about her teammates and she’s really embraced basketball as a positive outlet.” 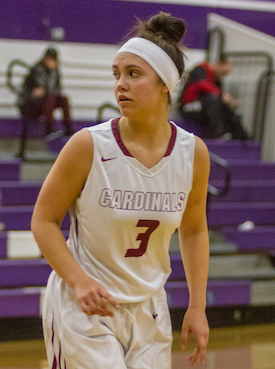 All while she continues to look at the positives in her life.

“You just can be thankful for what you do have,” Flores said. “How you have your family around. How you have your school — you get to go to your second home every day. And we can’t get to do that.”

For Jamboree organizers, as well as fans, it was encouraging to see Cardinal Newman competing — and thriving — in one of the tournament’s elite divisions.

“When we first heard about the fires. We began to make plans for our elite divisions without Cardinal Newman. But, Monica Mertle quickly let us know they still wanted to participate,” Kallam said. “And everyone involved with the tournament was both inspired and delighted that they were coming back.”

The timing of the Jamboree taking place during the holiday season — when people reflect on what they are thankful for — made Cardinal Newman’s participation resonate even more.

“The presence of elite teams like Cardinal Newman — a program that consistently succeeds at a high level in all aspects of high school sports — helps make the West Coast Jamboree a special event,” Kallam added. “And their desire to participate this year, despite the tragic occurrences, shows their commitment to the benefits that athletics brings to students.”