This weekend the Del Oro wrestling team will vie for a top-three finish at the Sac-Joaquin Section Masters Wrestling Championships. It would be the seventh consecutive season the Loomis school accomplished such a feat. But the Blake Brothers, the shaggy-haired sibling duo that powers the Golden Eagles, could up the ante in the history-making department.

As Del Oro (NorCal No. 5) looks to maintain elite status among section heavyweights like Vacaville (NorCal No. 2) and Oakdale (NorCal No. 3), junior Eli Blake (138 pounds) and senior Noah Blake (160) will attempt to repeat as SJS Masters champions.

If successful, the Blake Brothers will become only the second set of brothers to win simultaneous SJS titles in two different seasons.

They would also be the first to do it in over 40 years. The legendary Cuestas Brothers of Merced (Dan and Adam) achieved the feat in 1976 and 1977. They’re now reputed as two of the best officials in California.

“It’s not easy to do great things back-to-back,” Del Oro coach Clint Madden said. “So many things can happen to keep you from winning and new wrestlers come around that make it difficult. To have two brothers win in two years would be phenomenal. 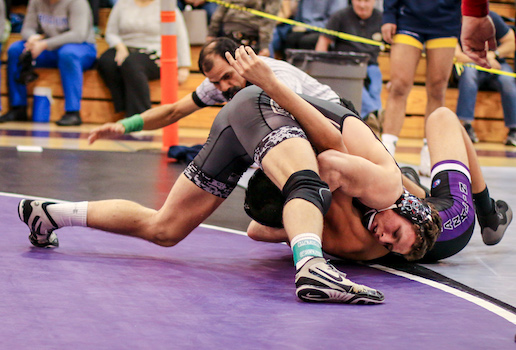 Noah Blake puts his opponent on his back during the SJS Division I Tournament. (Ike Dodson photos)

“They are both tough wrestlers and I think it’s great when you have brothers competing. I know we have a lot of brothers featured on our wall of fame in the wrestling room, and I bet a lot of other programs have the same thing.”

Super siblings aren’t rare in this sport. Younger brothers and sisters get caught up in the lifestyle of year-round wrestling at an early age. Programs nurture families and embolden siblings to participate in the same youth wrestling programs and strive for the same accolades. The SJS gives special recognition to father-son and father-daughter champions (10 pairs), and dedicates nearly half of its Masters program to past champions. It’s why some last names seem distinctly reserved for wrestling families.

Many other brothers have come close to the Cuestas family, but either spanned too great an age gap, or suffered injuries/upsets that derailed their chance at simultaneous titles. Modesto (Frank and Arlen Cole in 1960), Tracy (Rudy and Bob Blanco in 1962), Del Oro (Dane and Brandon Bettencourt in 1995), Escalon (Tommy and Max Schurkamp in 1997), Elk Grove (Michael and John Drake in 2006) and Modesto again (Israel and Emilio Saavedra in 2014) hosted dual sets of podium pirates, but those brothers only did it once.

For the Blake Bros. to change history, Eli first has to overcome his own demons.

Noah will be an overwhelming favorite to win Masters, though Pitman’s Kendall LaRosa will be very tough to beat. However, Eli enters Masters as only the fourth-ranked SJS wrestler in SportStars’ NorCal rankings. He was No. 1 in the SJS until last week, when exhaustion, ailments and more importantly the late-aggression of Elk Grove’s Kendall Frank overcame him in overtime of the Div. I championships. Frank entered the division tournament ranked No. 4 in the section. 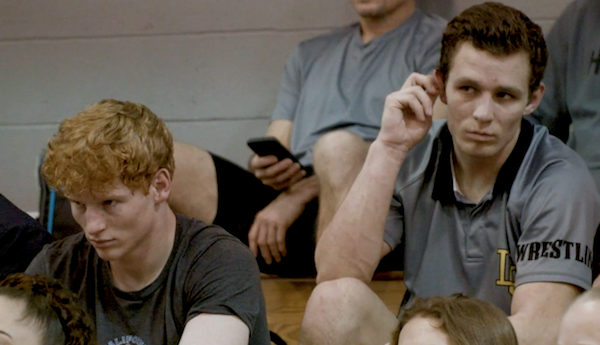 Eli Blake, left, and brother Noah keep an eye on the action as they await their SJS Division I matches.

Since Oakdale’s Ricky Torres was only a breath behind Eli, he became the new No. 1. Vacaville freshman sensation Ethan Birch, who beat Frank 8-7 at the SJS Duals, is the new No. 2. Frank bumps up to No. 3 and should meet Birch in a SJS Masters rematch in the semifinals. To potentially join his brother atop the podium for the second consecutive season, Eli will have to outlast Torres in the semifinals and the Birch/Frank winner in finals.

“I told Eli that it doesn’t really matter where he is in the bracket because he has to beat those guys at some point to accomplish his goals and win Masters,” Madden said. “I’m bummed for him that he lost, but it’s a great learning opportunity for him.

“I think it excites him.”

“I’m (Eli’s) biggest fan, even though I’ll probably never admit it to him directly,” Noah said with a grin after winning a Div. I title last week. “I love watching him wrestle and love watching how he has grown as a person in this sport.” 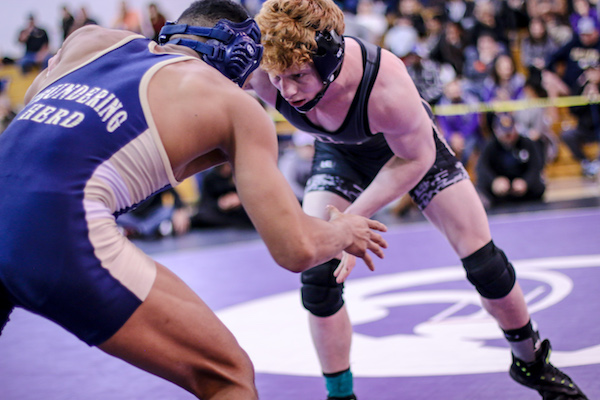 Eli Blake stares down his opponent before making a move during the SJS Division I Tournament.

Noah has his own bit of history to chase. Ranked No. 1 in NorCal and No. 2 in California by the California Wrestling Newsletter, Noah is primed to become Del Oro’s first four-time state place-winner. He was seventh in 2016, fourth in 2017 and third last year.

“I’m extremely proud of my brother,” Eli said. “He’s a big influence in this sport and I’m just trying to do what I can in his footsteps.”

In Noah’s way at state this year: Intermat National No. 5 Matthew Olguin, himself a three-time state place-winner and 2016 state champion (106 pounds). The Fresno State-bound Buchanan-Clovis star is 2-0 against Blake, boasting a 14-3 scoring advantage.

“I think everyone’s goal for Noah is to win state, because we know he is good enough,” Del Oro wrestling coach Grant Gambrall said. “He has a guy who has beat him twice this year, and we will have to overcome him to do that. But there are other tough guys gunning for him as well.

“He has to take care of business with every point scored.”

Gambrall said the differences between Noah and Eli work in their favor as they work toward common goals.

“They are not the same guy,” he added. “Noah is just plain stubborn on the mat — he doesn’t like to give up anything and he has a lot of confidence in his ability to outsmart you, wrestle more technically, more powerfully and dominate the mat.

“Eli is the most athletic and technical combination that I have been around.”

“(Eli) is way more athletic than I am, while I hold better position and grind more,” he said. “It’s a combination of different styles we have developed through our years of training.”

Those styles will be on display Friday and Saturday at Delta College, the new home of SJS Masters wrestling. Plenty of younger siblings will be in attendance, eyeing that podium with a special gleam in their eyes.