Improving Your Skills as a Short Setter

Cuore Project5 Girls Volleyball20 NCVA42 Ticker613
Obviously, there are many, many skills that setters need to have, and my goal here is not to give you a comprehensive list of...

Obviously, there are many, many skills that setters need to have, and my goal here is not to give you a comprehensive list of every one of them. Instead, I’d like to cover some of the skills that you have the ability to work on by yourself.

In my world, there isn’t just one way to get to the ball. There are many. Different players are better at certain types of footwork. The key is to get to the ball as fast as you can, so you should practice all different types of footwork. Run, skip, crossover, shuffle, jump, you name it. By working on all of them, you can be ready for every situation.

Master your serve. I was known for my jump serve. I would go to the gym and serve 100 balls or more growing up. Serving is one thing that you have full control over, like a basketball free throw. 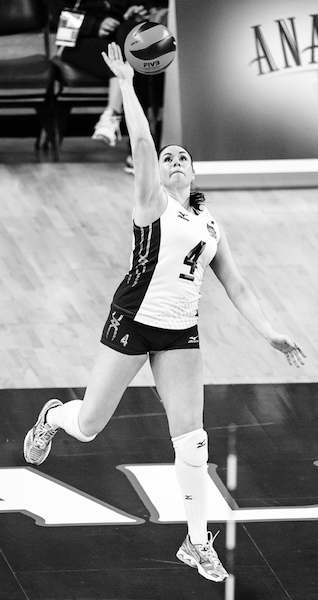 My jump serve was a big weapon for me in college and on the national team. PHOTO: DON LIEBIG

Height doesn’t matter for these skills. Practice matters. Hard work matters.  Determination to be the best matters. Which leads to another topic that can make you the best …

Most players, especially those who reach the college level, understand the basics of volleyball, but a setter needs to know everything about the game. And when I say you need to know the game better than those around you, I’m talking specifically about things like:

• Where your teammates are supposed to be. You have to know exactly where each player should be lined up no matter what rotation you’re in. This is part of your job.

• What plays in certain situations are best to call and why. For example, if your opponent has a short setter blocking, you’ll probably want to run plays that keep the other team’s middle on your middle and then send the ball to the outside over the short setter.

• How does your opponent play? What are their tendencies? Watch video or watch teams during breaks at tournaments. Pay attention to what your coach tells you about the other team. If the other team sets the middle a lot, you need to know that. Or maybe their defense starts way back in the court. The more specifics you know, the better you’ll run the offense.

Be the Best Setter

Have you ever thought about how many points are lost during the course of a season because someone on your team didn’t know that the opposing setter was in the front row? It’s the setter’s job to make sure that doesn’t happen. It’s the setter’s responsibility to know everything. Sounds tough, and it is. That’s why exceptional setters are hard to come by. But the best ones know the game like no other and become the best leaders. Stay tuned. We’ll dive into that later.