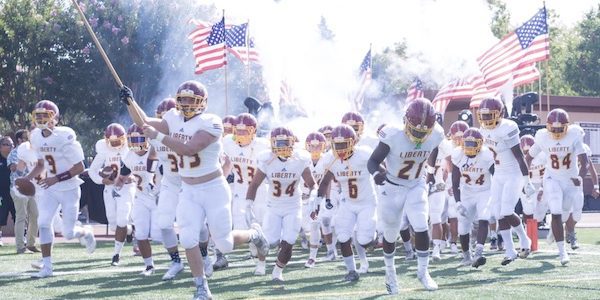 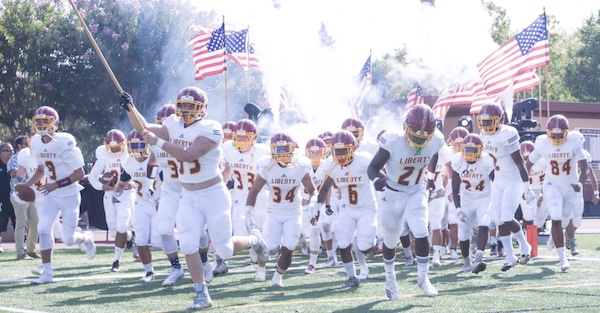 Attack In Afghanistan, 9/11 Anniversary Add Impact To The Annual Honor Bowl Event That Uses Football To Gather And Celebrate Veterans •

Perspective is a word often thrown around (like a football) to describe a way of viewing or regarding topics or viewpoints. From junior programs every Saturday to high school football’s Friday night lights, young athletes could count on lining up against opponents and playing a game they love.

But COVID-19 and the resulting lockdowns forced a new point of view towards lacing up cleats and strapping on a helmet on a weekly basis.

The Class of 2022 endured the hardships of a shortened spring season without playoffs and perhaps gained an appreciation for time spent on the gridiron. This weekend, though, eight teams will likely gain more perspective when the 2021 Honor Bowl rolls into Brentwood.

Tabbed as one of the nation’s premiere football showcases, the Honor Bowl embodies its tagline that “it’s more than just a football game.”

With a mission to “educate students, coaches and community about patriotism while raising money for injured, ill and wounded veterans,” the Honor Group creates an experience for players, coaches, and fans that reaches well beyond the football field. Add in the fact that the weekend marks the 20th anniversary of 9/11 and the deaths of 13 members of the military in Afghanistan, and the patriotic mission is intensified.

“I hope that the players enjoy the experience and gain some historical value to them,” said Liberty-Brentwood coach Matt Hoefs, whose school is hosting the Northern California Honor Bowl games. “If they can understand that it’s more than a game, then they will appreciate the game and the moment more.”

The Honor Bowl program includes pregame education about the organization and its mission; pregame motivational talks from military personnel, including wounded veterans; patriotic displays around the field and stadium; and the building of the Battle Cross by veterans and family members of fallen soldiers to pay tribute to the honor, service and sacrifice of soldiers killed in battle.

“It’s an emotional experience,” said Clayton Valley co-head coach Nick Tisa, who accompanied the Ugly Eagles to the 2019 event at James Logan High School. “I don’t think it will hit most of the kids until the pregame talks, but patriotism and the military have significance to the communities involved in the event and I consider it a great opportunity for our program.”

RELATED: Coaches Reflect On High School Football In The Week Of 9/11 In Newest 7 Friday Night Podcast.

While coaches like Tisa, Hoefs, and Campolindo head coach Kevin Macy have previously experienced the Honor Bowl, the majority of the local players have not been involved in an Honor Bowl game.

Macy, whose Cougars played in the 2019 Honor Bowl, said that his players have been eager since the start of the week to display their pride in the military and the country.

“These kids were stunned by what happened in Afghanistan with soldiers being killed,” Macy said. “It was like their 9/11. But they are so hungry to go somewhere to be patriotic. Football is something for them and the entire community to celebrate because our country has been bashed for the last two years.”

The Cougars, who will face host Liberty-Brentwood in Friday night’s lone matchup at 7 PM, plan to wear stars and stripes jerseys just like the 2019 team did. COVID restrictions significantly slowed fundraising efforts for the special red, white, and blue helmet logos and Honor Bowl logo stickers the program purchased for its previous Honor Bowl outing. However, Macy said that the team’s spirit is high.

In fact, the coach said that one of the biggest challenges from this special week is determining who will have the honor of carrying the American Flag when Campolindo runs out of the lights and smoke of the Honor Bowl’s end zone tunnel.

On the football side of things, Macy and the Cougars are excited to erase the memory of a 49-0 loss to Aptos last week. They hope to use the emotion and spirit of the Honor Bowl to bounce back from what the coach called the “worst loss for the program in a very long time.”

“I think the event will provide added motivation and a challenge for the team,” he added. “You want to put forward your best product and effort for a special game, so our mindset is to go in there, save face, and rally to come through for the troops.”

The showdown between Campolindo (1-1) and host Liberty (0-1) was not on the event’s original schedule. The Cougars were slated to play Sutter Union in the Friday afternoon game with the Lions hosting Canyon Springs-North Las Vegas in the Friday night matchup. When both opponents had to back out of their games, it set up the North Coast Section battle. With both teams coming off of disappointing losses, expect an emotionally-charged game.

“I expect that both teams will be hungry and ready to play,” Liberty junior quarterback Nate Bell said. “I know that there will be emotions at the start of the game, but I think that listening to the soldiers talk before the game will be inspiring. It will be interesting to see how everyone reacts and comes out to play, but I expect to have the event light a fire for me.”

Clayton Valley is headlining the Saturday tripleheader with a 7:30 PM matchup against Liberty-Bakersfield. Both programs have impressive pedigrees and recent regional and state playoff experience, but Tisa and co-head coach Tim Murphy realize the scoreboard is secondary to the educational opportunities of the Honor Bowl.

“We strive to use football to teach off-field lessons,” Tisa said. The coach added that the recent events in Afghanistan provided valuable lesson material in his U.S. History class. “We know that there’s more to life than football, and try to use football as a platform to make our players better Dads, husbands, colleagues and friends.

Those lessons are the gained perspectives The Honor Group and its football showcase hopes to build.