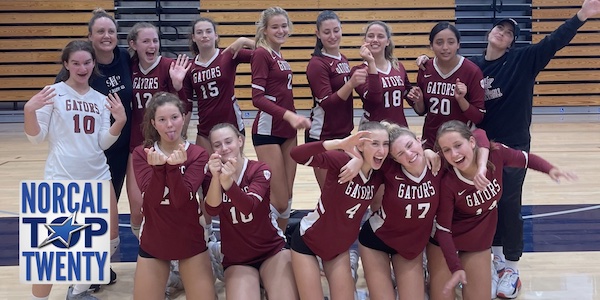 All records are through Tuesday, Sept. 27. Previous ranking in parenthesis.
PICTURED ABOVE: No. 3 Sacred Heart Prep-Atherton. (SHP Athletics photo/Twitter)

We saw plenty of movement in the NorCal Volleyball Rankings over the past eight days. (We were delayed one day on our release, so we included scores from Tuesday night — none of which directly led to changes)

Let’s start with the most significant move of the week, which belongs to Sacred Heart Prep-Atherton. The Gators earned a two-spot promotion to No. 3 after going 6-0 last week, a jump that became a possibility after previous No. 3 Monte Vista-Danville and No. 4 Branson-Ross each suffered losses to lower-ranked teams. Monte Vista fell 3-1 to cross-town rival and then No. 18 San Ramon Valley, and Branson was bested in five sets by then-No. 14 Marin Catholic-Kentfield.

While Monte Vista slipped to No. 4, the East Bay Athletic League added a second Top 5 team as Amador Valley-Pleasanton used an 8-0 week to rise two spots to No. 5. The fourth EBAL in the rankings, Foothill-Pleasanton, dropped six spots to No. 14 after losing four of six. The Falcons were able to avoid dropping all the way out, however, thanks to previous wins over San Ramon Valley and No. 9 Campolindo (who they’ve topped twice).

Former No. 12 Tamalpais-Mill Valley was the lone team to drop out this week. The Red Hawks lost in straight sets to Redwood and were lacking a resume strong enough to keep them around.

Sacred Heart Cathedral-S.F. claimed the vacancy left by Tamalpais. The Irish moved into the No. 19 spot, just ahead of the Valley Christian-San Jose team they beat in five sets last week. SHC also has a win over No. 15 Bishop O’Dowd-Oakland and two over a strong Rocklin team that took No. 9 Oak Ridge-El Dorado Hills to five sets on Tuesday night.