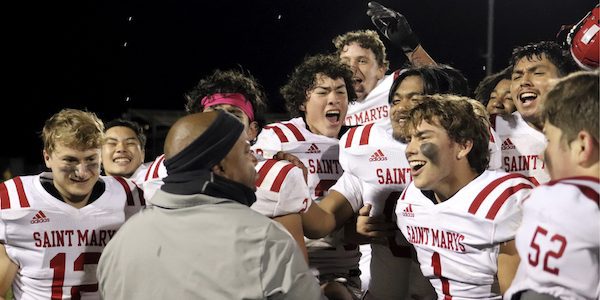 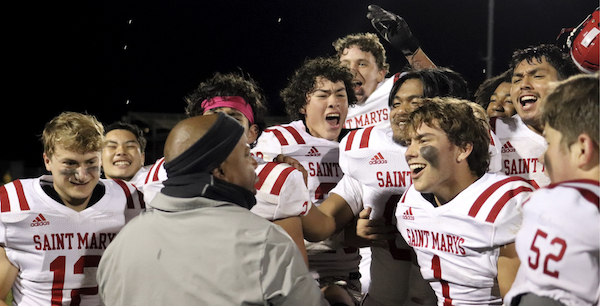 With Its Third Coach In As Many Seasons, Berkeley’s St. Mary’s Football Program Went From 3-7 In 2021 To An Improbable NCS No. 1 Seed •

In the moments after a 28-20 win over host St. Patrick-St. Vincent-Vallejo, Goree and his St. Mary’s football teammates let loose a rush of emotions. The Panthers sang to their fans, exchanged hugs, tossed water in the air and rejoiced in recognition of not only clinching a Tri County Athletic League-Stone Division title, but also the significance of finishing a 10-0 regular season.

The Panthers’ turnaround to become the top seed of the North Coast Section Division VI playoffs seemed particularly unlikely a year ago. Coming off a 3-7 season in 2021, new head coach John Trotman Jr. took over a program that hadn’t enjoyed a winning season since 2015. He became St. Mary’s third head coach in three years, and inherited a team in which apathy had begun to set in.

“People could’ve quit. Everybody could’ve quit and there would’ve been perfect reasons to do so,” Goree said. “But we never gave up.”

Instead of packing up and going home, the Panthers hit the reset button. Trotman turned to his 11 seniors to lead the way, and what resulted was a work ethic that brought positive energy back to the forefront. They will carry that energy into a first round playoff game against visiting Arcata at 1 p.m. Saturday afternoon.

“The senior class, I love that group. It’s a special group,” Trotman said. “They came in, they worked hard all summer, stuck together, and they just believed.”

The work paid off right away. Wins over Middletown, Deer Valley-Antioch and Arroyo-San Lorenzo got the ball rolling for what would turn into an unforgettable regular season.

“I think there was definitely a culture change over that time. Everyone bought in,” said senior quarterback Finn Hartney. “Before, people were worried about themselves. We had tons of talent last year. This year, we still have that same talent, but everyone bought in. People aren’t worried about individual stats. We just worry about getting the W at the end of the day.”

Goree found himself right in the middle of it. The team’s primary ball carrier also led the way on defense, starring at linebacker for a unit that allowed a total of just 43 points over a 9-0 start.

Described by teammates as “the motor of the team” on both sides of the ball, he was again front and center against St. Patrick-St. Vincent.

With St. Mary’s leading 14-12 at halftime, the Bruins attempted a short kickoff to begin the third quarter. Goree knew what was coming, picked the ball up off a good bounce and broke free for a 72-yard touchdown.

The score re-established momentum for the Panthers, and a few minutes later a 9-yard touchdown pass from Hartney to Austin Rogol, along with a 2-point conversion pass by the same duo, provided the final points in the Panthers’ win.

“We all love each other and want to fight for each other,” Hartney said. “No one wants to quit. Even when you want to quit, you know you can’t quit because the people beside you aren’t quitting either. So, you’ve got to continue to fight for your brothers. It’s all love.”

Hartney finished with 125 passing yards and a pair of touchdowns to lead the Panthers offensively. Goree rushed for 49 yards, and Logan Tanisaki provided one of the night’s biggest highlights by turning a first half screen pass into an 81-yard touchdown.

As has been the case all season, St. Mary’s defense was a major catalyst. The Panthers grabbed four interceptions, led by two from senior Malachi Young, to hold a Bruins offense that averaged 49 points per game coming in to just 20 on the evening.

“I’ve never had a winning season at this school, so this year means a lot to me,” Young said. “Even the alumni have been saying that we haven’t had a winning season in I don’t know how long. It’s crazy seeing everyone buy in, not be selfish, and come together as a team.”

The story isn’t nearly finished, though, as the Panthers now face their best chance at hanging their first NCS championship banner since 2013. The 2013 Division IV title is the progam’s one and only thus far.

“We’re going to celebrate tonight but we’re looking forward to the first round,” Goree said. “This was a small goal. We’re trying to win NCS. That’s the ultimate goal. We’re happy now, but we’ve got to stay focused.”

If they do, Goree and his teammates will have plenty of reason to keep on smiling.