NOTE: This article first appeared in SportStars on August 22, 2013, as the cover story to our 2013 Football Preview. • We are providing...

NOTE: This article first appeared in SportStars on August 22, 2013, as the cover story to our 2013 Football Preview. • We are providing it again in its original version as a complement to the most recent column of our editor, Chace Bryson, who reflects on the Joe Mixon he met and provides his thoughts on the polarizing running back talent as the NFL draft nears at the end of April.

It all starts with the smile.

Joe Mixon has the type of smile that ad agencies covet. It comes naturally and never looks forced. It radiates as an extension of Mixon’s contagious personality.

This is the first thing Freedom High football coach Kevin Hartwig remembers upon meeting Mixon during the first week of his freshman year.

“The thing that caught me — yeah, you’re looking at a man (physically) — but it was his personality,” said Hartwig, who’s about to begin his 12th season of coaching at the Oakley school. “When I talked to him for the first time, I just realized he was someone special.”

Mixon aced his first impression with the coach, and less than a year later — after a standout season on the freshman team — he made a second impression, this time with pads on.

“Before his sophomore year we took him to summer camp with the varsity using a wait-and-see type outlook,” the coach said. “We got to camp and we just saw it was obvious.”

Mixon started for the Falcons as a sophomore, rushing for more than 1,100 yards and 13 TDs. Last season — despite being just one option in a spread offense which also featured Nevada-bound quarterback Dante Mayes and Washington-bound receiver Darrell Daniels — he finished with 1,443 yards and 21 rushing touchdowns. He also caught 18 balls for 383 yards and seven more scores. 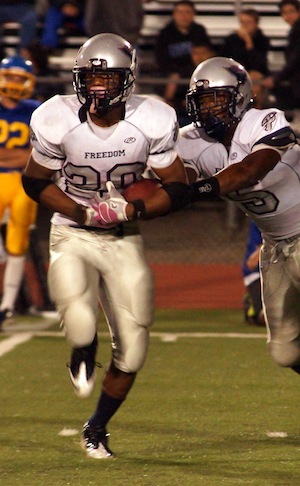 Mixon takes a handoff during a 2012 game against Foothill-Pleasanton.

That ability to hurt defenses in multiple ways — along with his 6-foot-1, 210-pound frame — sent his name rocketing up the recruiting charts. The scholarship offers came pouring in, as many as 50. He’s now among the Top 20 overall recruits in the nation.

Handling the attention wasn’t a big deal, but refining the list of suitors proved to be difficult for the affable Mixon. This was a lesson he learned the hard way when he flippantly showed interest in receiving an offer from the University of Virginia and only a few days later the Cavaliers sent him an offer and had a coach on the Freedom campus.

“Coach Hartwig knew I didn’t want to go (to Virginia),” Mixon said. “He told me ‘You’ve got to tell him no.’ But at the same time, they’d offered me only a few days ago. I didn’t want (the coach) to feel like I’d wasted his time. … That was a wake-up call. From that point on, it got serious.”

Hartwig laughs when recounting his version of that story. “That’s just Joe. He doesn’t like to disappoint people.”

There was a time when Mixon struggled to find his smile.

When he was 10, he and his family — Joe is the youngest of five with a brother and three sisters — moved from San Francisco to Antioch. He enrolled in fifth grade at Mission Elementary, but the transition wasn’t overly smooth.

Mixon had yet to experience his growth spurt and became a target for kids to pick on.

“For me, I couldn’t really handle everything,” Mixon said. “I won’t say I had to prove myself to everybody, but I didn’t like to be messed with. I used to get picked on all the time. I used to just get mad, and the anger just used to build up and I’d just snap.”

Finding a way to cope with that wasn’t easy for Mixon, who would’ve much preferred to wear his smile and joke around.

“He could get angry very easily,” longtime Mission Elementary employee Sherri Phillips recalled. “But he was also very respectful. You knew he was a good kid.”

Around the same time, Mixon found that extra element of confidence and identity during his first year of football. He signed up for Antioch Youth Football, and because of his athleticism was initially placed in Jr. Midgets — three levels ahead of the normal one for his age group.

That lasted only a day after his mom, Alisa, saw the size of the players on the field. He moved down to his regular age group and Joe maintains that was the only time his mom worried about her youngest playing football.

Mixon, a fan of Michael Vick’s at the time, started out at quarterback. However, with another capable passer on the team, a wise coach asked if Mixon would rotate in at running back.

“I went home and told my dad that they want me at running back,” Mixon said. “That’s the position he played, and he started coaching me up. … The first scrimmage, I think the first five times I touched the ball I scored a touchdown. After that, it was a wrap.”

Mixon’s dad, John, grew up in San Francisco and played running back for Daly City’s Jefferson High and then Troy University in Alabama. He had a tryout with the 49ers cut short by a severe knee injury, according to Joe.

Mixon’s other major running back influence came when he got to Freedom and began working with assistant coach, Ron Rivers. Rivers did reach the NFL, retiring after a six-year career as a running back and return specialist with Detroit and Atlanta.

“Both of them helped me a lot,” Mixon said, referring to Rivers and his dad. “I’d say one of the biggest things Rivers helped me with was reminding me to stay low to the ground because I had a tendency to run upright.” 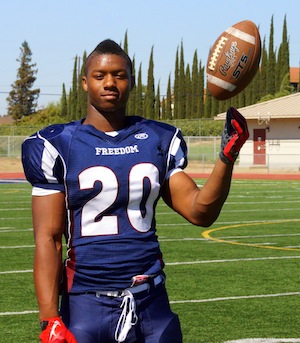 Moving from Antioch to Oakley with his mom and enrolling at Freedom gave a more-confident Joe a chance to start over. That’s the kid Hartwig met on the second day of classes back in 2010. It’s the one he stills knows today.

“He’s been the role model of the campus,” the coach said. “There’s a lot of pressure in that, and he’s done a pretty darn good job of being that kid. … And inside the program, he leads by example. He works hard. He’s first in every run drill we do, first in every line.”

Mixon never wavers in his belief that Freedom helped re-shape him.

“I came a long way,” Mixon said. “Coming here changed my whole life. I’m good in the classroom now. I can socialize with people now. I have a lot of friends here. And now football wants to make me go even further.”

Where exactly will football take him? A major Division-I college to start. Mixon narrowed his choices to 10 on Aug. 2. He’s scheduled four of his five allowed official visits for the fall. He’ll be taking in Texas A&M, Oklahoma, Wisconsin and Florida.

As for now, he claims to have a complete and total focus on getting the Falcons another Bay Valley Athletic League title and deep into the North Coast Section Div. I postseason once again. Last year’s season ended in a rainy 33-18 NCS quarterfinal loss at James Logan-Union City.

“(That loss is) still with me,” he said. “At the same time, that last game we made a lot of mistakes. I’ve got to get over it, and I feel this year it’s going to be a different story.”

The Falcons should have a strong defense with a good returning nucleus on the defensive line and Mixon at free safety. However, on offense, Mixon is THE weapon. Who else can emerge around him will be the key to another championship year for Freedom.

Hartwig will devise several different ways to get the ball into the 5-star recruit’s hands, but there’s no doubt opposing defenses will be scheming to stop him.

This suggestion brings out the smile.