The rise of Dublin High School’s boys basketball program can be viewed in distinct measurables.

And though the climb has been steady over the past decade, last season made that barometer soar. Here’s what the Gaels did:

Set a school record for wins with a 29-5 record 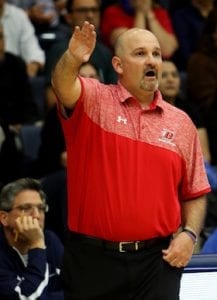 Earned the No. 1 seed to the CIF Div. I Northern regionals.

With a new season upon them, the Gaels won’t look back — or too far ahead. To them, November is no time to be preoccupied with championships. Instead it is time to absorb each step as the season turns.

“Our mantra is the whole process; to love the process and fall in love with the process,” said Dublin coach Tom Costello, starting his 12th season with the Gaels. “If you are just concentrating on the goals at the end, you never will be satisfied.”

This season Dublin is buoyed by two returnees of a stellar backcourt, senior Conner Jackson and sophomore Robby Beasley. And by its center, 6-foot-7 senior Jack Nielsen.

They did lose last season’s top scorer, guard Tim Falls, now at Montana. He’s the latest in a list of recent Gaels — JoJo McGlaston at Bradley, Jamir Andrews at Northeastern State and Devin Koeplin at Cal State San Marcos — at the next level.

“With Tim, it wasn’t always what you saw on the court; he took on a lot of responsibility and leadership,” Costello said. “What was underrated with him was his defensive ability. He makes guys around him better, and that’s tough to replace.”

The recruiting of Falls meant college coaches also looked at players like Jackson and Beasley. Jackson has interest from San Francisco State and Seattle Pacific, and Beasley has the attention of Nevada, San Jose State and Davis, Costello said.

Jackson contributes in a myriad of ways, averaging 10.1 points, 3.5 rebounds and 2.5 assists a game last season. This year he’ll be playing a lot of point guard, working hard to bring along a half-dozen sophomores, including his younger brother, Devon. 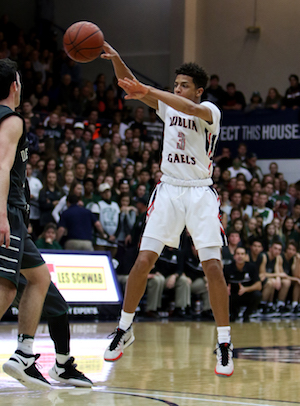 Said Beasley: “Conner is a very unselfish player. He’s a shooter, and I know if I drive he can shoot it. It’s an easy partnership.”

Beasley excelled in limited time as a freshman, averaging 12.3 points per game despite missing eight weeks with a fractured wrist. “He’s quick as lightning and can shoot and drive it,” Costello said.

“People are going to know we are one of the top dogs,” Nielsen said. “It won’t be easy.”

Added to the mix is Virginia transfer Kyle Brown, a 6-4 wing whose mother is now stationed at Camp Parks in Dublin. Sophomores Cole McMahon and Jaden Saunders figure to be in the mix after contributing as freshmen.

“What I would like for us to be is a more defensive-minded team,” Costello said. “You have to be able to defend and make stops. We know we can score a lot of points.”

Close games were a running theme, particularly during the last half of the 2016-17 season.

In the EBAL’s new league playoffs last February, it came down to Dublin and De La Salle, which had edged the Gaels 51-45 in their regular-season meeting. The second time, it was Dublin winning 64-60 in overtime in the championship game. It was the first EBAL title for Dublin in 44 years, and although Dublin had just rejoined the league after a lengthy absence, the victory showed the school would be a formidable member of one of Northern California’s top leagues. 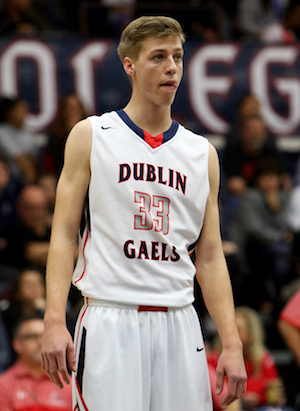 “Winning the EBAL meant a lot to us,” Beasley said. “For me it was my first year of high school basketball competition, so it also meant a lot personally. It was good preparation for what will be in store in the year to come, with the competition there.”

Round 3 of Dublin-De La Salle came in the NCS Div. I finals, and the Spartans prevailed 53-51 on a Justin Pratt tip-in with 1.2 seconds left. Dublin still earned NorCal’s No. 1 seed in Div. I. But after opening with a 72-54 win over Lowell-San Francisco, the Gaels’ season suddenly ended with an 83-80 loss to No. 9 seed Palo Alto in the NorCal quarterfinals.

“We went in there with too much confidence, and you could tell by how we were at practice (before the game),” Beasley said. “Now when we practice, our energy is at the top right now. We play like we’re facing the best competition we’ve faced.”

That competition starts when Dublin opens against Berkeley on Nov. 25 as part of the NorCal Tip-Off showcase at Newark Memorial. After matchups with Antioch and Pittsburg, the Gaels head to the Gridley Invitational, which Costello said is “probably the top tournament in Northern California.”

The program’s acceleration has been steady, advancing to an NCS quarterfinal or better in eight of the past 10 seasons. In 2007-08 (Costello’s second season at the school), Dublin went to the Division III finals, losing to Campolindo-Moraga. The Gaels made their way to Division II, and in 2012-13 went to those NCS finals, falling to Newark Memorial. Last season was their second in Division I.

Excitement in the program has grown, paralleling the surge in population in one of the state’s fastest growing cities.

“We’ve really brought out the community. Everybody knows this team in the community and it’s brought us together,” Nielsen said.

Adds Beasley: “The school and the city itself have already progressed and it really is the community that has helped us put this together.”