March Of The Mustangs

Monte Vista Prepares For Showdown With Mitty-San Jose — A Match Between Two Nationally Ranked Teams For The First CIF Div. I NorCal Title

Awarded a penalty kick after a foul in a tied-up tense CIF NorCal Division I semifinal with Carondelet-Concord, Anderson converted in the 62nd minute and the host Mustangs advanced with a 2-1 win on March 8.

“I like taking them a lot,” Anderson said. “I felt pretty confident to take it today.”

Anderson converted the kick against keeper Angelina Anderson, her club soccer teammate who had a stellar outing against Monte Vista. “She is one of my best friends, actually,” Rachel Anderson said. “She’s awesome; she’s on the national team right now.”

For the Mustangs, having Rachel Anderson taking that shot was a role she was made for.

“She is a confident player,” Mustangs coach Chris Lum said. “She plays with a lot of flavor and lot of personality, and that’s what you want in a situation like that. A kid with that kind of confidence and that kind of swagger, to be taking that penalty kick in that situation.”

The kick — along with some outstanding defense — led to the win, but not without Carondelet pounding the ball in the waning minutes trying for an equalizer. 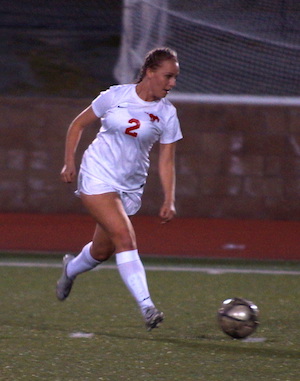 Rachel Anderson prepares to strike the ball during Monte Vista’s 2-1 win over Carondelet on March 8.

But you’re scared because you have to hold on to that lead the rest of the half. They were pressuring really hard the whole game, we just had to hold on for our lives a little bit.”

Forget that the Mustangs had beaten the Cougars in three other meetings this season — twice in East Bay Athletic League matches and once again in the North Coast Section Div. I championship game. This fourth time around was a tense, hard-fought and often bruising battle.

“They are by far the toughest opponent we have played this year,” Lum said. “They are as athletic as we are and they put stuff together rather nicely and they have some really really dangerous players.”

In the first minute, Monte Vista scored when Sarah Arnaudon struck from 10 yards out.

“I hadn’t scored in a while, so it was a good game to score in,” Arnaudon said.

That lead held until the 37th minute when Carondelet’s Ellie Ospeck scored. 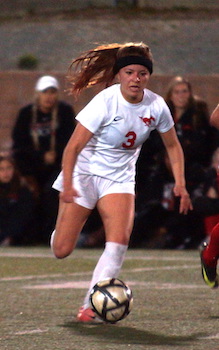 Megan Edelman leads the Mustangs in goals scored on the season.

Mitty advanced earlier in the day with a 4-0 win over Granite Bay. The inaugural NorCal title matchup pits the Mustangs, ranked No. 2 in the nation and No. 1 in the state by MaxPreps, against the Monarchs, ranked fourth in the U.S.

“No one’s ever done it before; we’re the first ones,” Arnaudon said. “It’s going to be weird but I am excited.”

The team met on Dec. 21 in a Tri-Valley Classic matchup, with the Mustangs prevailing 1-0.

“I’m really excited,” said Anderson, a junior who is committed to Utah Valley University. “We played them in the Tri-Valley tournament and it was a really difficult match. We were missing Megan Edelman, who is one of our star players. I think having her back is going to be very helpful. I think it is going to be a great match.”

With the addition of NorCal playoffs, the Mustangs have had an extra chance to showcase why they are an elite program.

“It’s a long season, these girls have held their attention span and their work rate for a long time,” Lum said. “Usually high school is shorter but this year it’s been extended by a couple of weeks. But they have been phenomenal. They show up, they work hard, they play … they do it with class, they do it with grace.”

Arnaudon will be one of four seniors finishing their Monte Vista high school careers on their home field.

“My last one … it will be emotional,” Arnaudon said.