Undaunted By Offseason Knee Surgery Or A Fourth New Coach In As Many Seasons, Jacob Cole Leads Roseville’s Push Toward A Title Defense •

Injuries can be devastating for prep athletes, but timing plays a big role in their effect on the prospects of college-bound seniors.

Post-commitment ACL tears, broken bones, ligament injuries or the like can cause universities to pull a scholarship; crushing the hopes of an otherwise bright future.

That’s not always the norm, but it is with pre-commitment injuries, such as the one Jacob Cole suffered near the end of his junior campaign. Those mid-to-late career injuries risk everything these athletes work for. And universities usually have a big talent pool to choose from, making the hopes of an injured athlete fade quickly.

“It was at the Bellarmine tournament last year (when I was injured), but I just kept playing on it throughout the season and through Junior Nationals, which made it worse,” the Roseville High senior admitted. “The doctors didn’t know how I was able to do that.”

Cole was one of four key pieces in Roseville’s first CIF Northern Regional title a season ago. And he played through pain the entire postseason. 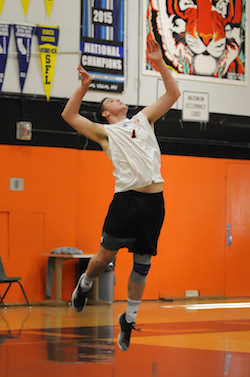 Jacob Cole rises for a serve during the Tigers late April contest against league rival Whitney-Rocklin.

In fact, he avoided the doctor’s office in order to sustain dominance on the court.

“We ended up winning NorCals, so that was worth it,” he confessed.

It was the first NorCal title for a school outside the volleyball-rich Central Coast Section over the five years of the CIF tournament’s existence.

Two weeks prior, Cole (14 kills, 2 blocks) had another outstanding performance to help the top-seeded Tigers earn a straight-sets win over No. 6 seed Whitney-Rocklin in the CIF Sac-Joaquin Section championship (25-20, 25-20, 25-19); the club’s first section title after three straight championship berths.

“After taking second the last two years, and to win it against Whitney, that just feels great,” Cole admitted after that game. “We wanted to beat them badly, because they beat us two years ago in the section finals, and we weren’t going to let them do that again.”

At that time, the junior standout had interest from volleyball programs such as UC Merced, UC Santa Cruz, George Mason and several East Coast schools. But he suffered an injury midseason and those hopes dwindled.

He had osteo condyle defect — bone damage behind the kneecap, which caused immense pain every time he jumped and landed.

Cole was relegated to the bench in the later half of the club season, which made finding a suitable collegiate destination difficult.

Following surgery on Aug. 3, Cole eased his way back. He used crutches to get to class and hobbled around campus for two months. He endured four months of physical therapy to get near 100 percent, but it wasn’t until the start of the 2018 prep season when he felt like himself again. 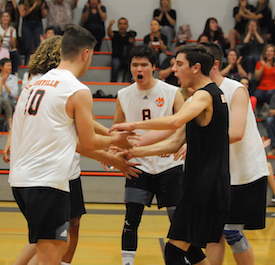 The Roseville lineup celebrates earning a point during their match with Whitney.

Yet despite the injury, Cole displayed tremendous resiliency and was back to work quickly. Through April, he’d posted a career-high 432 kills in less sets than any other season (87). All while leading Roseville to a playoff berth and an undefeated league record, .

“I’m extremely proud of him for bouncing back the way he has,” Roseville coach Cole Williams said. “A lot of young players who experience injuries like that can get discouraged and many don’t come back like he did. But Jacob hasn’t shown any signs of that; he’s worked his butt off in the weight room and in practice.

“He never complained; he just worked hard to get back.”

Cole’s work ethic has resulted in his best all-around season. Not only has he been the focal point of the Tigers’ offensive attack, but he owns a career-high .468 hitting percentage. He’s slammed home 106 aces and has been stellar on defense with 72 blocks and 404 digs.

“Personally, I think I’ve been doing pretty well coming off of knee surgery,” Cole stated. “I’ve definitely tried to be more of a leader on the court because I am one of two returning starters from last year.”

Cole has done his best to adapt to yet another new coach at Roseville High — the fourth in his four years. 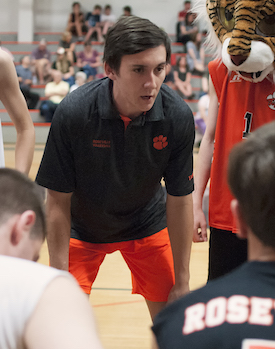 Cole Williams is the Tigers’ fourth coach in as many years.

Despite a record-setting season from Marco Salcedo last year, he stepped aside and Williams assumed duties just before the season, leaving little time for him to affect change. Yet this group of Tigers has been stellar.

On April 30, Roseville looked playoff ready as it swept Ponderosa-Shingle Springs to claim a fourth straight share of the Capital Valley Conference.

“We’ve pretty much achieved what I’ve expected,” Williams said. “I knew a lot of the players coming in, especially Jacob after playing with him when we were younger, so I’ve held them to a really high expectation because I knew all of them were highly experienced players.”

Williams was 14 and Cole was 9 during their only other time together on the same team. But the pair have played against each other for many of the past seven years in club play.

“He was still excelling even though he was five years younger than everyone else,” Williams acknowledged.

Cole was the starting libero and Williams an outside hitter the year they played together for Northern California Volleyball Club.

Fast forward nearly a decade and the two are reunited, this time as mentor and mentee.

“I’m used to it,” Cole said about the fourth coaching swap in as many years. “He’s young and this is his first time coaching a high school team, so I’ve done my best to become a leader and help the team out.”

Despite the yearly changes, Cole has helped Roseville go 131-29 in his four seasons. That includes 27-5 (through April) this year under Williams, who grew up in the Foothills.

But the jump back home to coach at Roseville High brought a few challenges.

“The boundary between being friends and having a professional-level of respect is really the only issue I’ve encountered so far,” Williams pointed out. “You have to draw the line with them sometimes. But they trust me as a coach, respect my decision-making and they know my experience and background.” 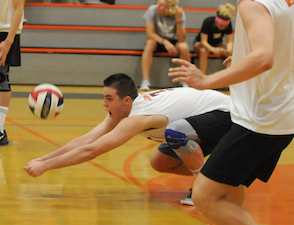 Jacob Cole isn’t just a polished net player. He can dig with the best of them.

Williams is looking at Cole and others to put his plans into motion at the most important time. Luckily, the first-year coach has a strong leader to lean on.

“I feel like our team looks up to me, especially when we’re down, hoping that I’m going to do something,” Cole said. “And I’ve definitely gotten better in situations like that.

“I have more confidence with my attack and I try and hit around the block.”

Although Cole is the most experienced, the team isn’t one dimensional. Younger role players like Nick Johnson, Hunter Hammond and junior middle blocker Miles Judd have stepped up. Cooper Baddley has also played well with a career-high 282 kills.

“Our goal is to win in the playoffs and go as far as we can in NorCals,” Cole added. “I know we all want to go back-to-back.”

Regardless of where Cole and the Tigers finish, his work ethic likely paved the way to a collegiate scholarship.

Concordia University in Irvine is a possible destination, where his friend Ethan Heldt is enrolled. Cole has toured the campus before but is waiting to announce his decision until it’s final.

“He’s definitely going to do really well at the next level, especially because he’s so humble,” Williams said. “His coaches are going to love him, not only because of that, but because he genuinely loves the sport. And he has an incredible work ethic. He’s one of the hardest working people I know, and that’s not an exaggeration. He’s going to be great.”

But first, Cole has a pair of championships to defend.