Aquanuts in Sync for Gold at Jr. Olympics

Saturday June 23rd, began the 2018 U.S. Junior Olympics for USA Synchronized Swimming Miami of Ohio’s Natatorium. Athletes from all over the United States competed in figure, solo, duet, team and combo events. Walnut Creek came out on top! Seven times as a matter of fact!

The Walnut Creek Aquanuts sent their 11-12 and 13-15 athletes to the competition and wowed the judges with polished routines and technical skills.

The 11-12 final events were held on Monday and Tuesday. Emma Moore took gold in the figure event, followed by her teammate and duet partner Dalia Ovadia who took silver.

Both Emma and Dalia competed in the solo event where they took gold and silver respectively.

The two swimmers came together and swept the duet event by almost seven points to win gold.

WCA rounded out the duet podium with Carmen Kawakami and Morgan Woelfel taking the bronze medal. 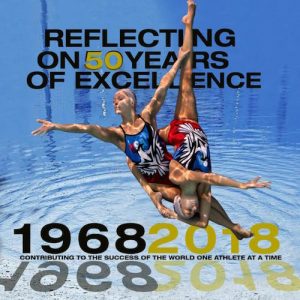 In the 13-15 category, WCA continued to have a strong showing. Megan Kerner and Ariana Stanton took silver and bronze in the 13-15 figure competition.

WCA’s final event in the Junior Olympic competition did not disappoint either. Swimming a clean routine, ten Aquanut athletes won a seventh gold for the club in the combo event.

Just qualifying for U.S. Junior Olympics is a major accomplishment. Only the top two or three routines from each region of the country qualify for the national meet.

WCA head coach Kim Probst said, “All the hours of hard work paid off this week. 7 out of 9 possible gold medals went to Walnut Creek and I couldn’t be more proud of our amazing athletes and coaching staff.”

For more information on the team and this historical event for the club go to www.aquanuts.org.

August 30-September 2, 2018 the club will showcase their Fall Swim Show to commemorate 50 years of excellence!

We encourage you to go as well! [Read all about it here].