In some quarters, club volleyball doesn’t always get the same attention as high school volleyball, but the competition is at the highest levels. And the Bay Area’s Vision Volleyball Club 17 Gold team is heading for the top.

The team qualified twice for the USA Volleyball Girls Junior National Championships, to be held June 30-July 3 at Cobo Arena in Detroit.

Said setter Selina Xu, “Our goal was to qualify for Open and play the best. It’s the most competitive division and we’ll play the best teams in the country.”

This Vision Volleyball team is loaded with rising seniors on the high school level who will be playing in college.

“(The team has) been having a good year this year,” coach Ron Whitmill said. “Obviously a lot of talented kids on the team, a lot of kids already committed to go to college.”

A year ago, Vision Volleyball’s 16 Gold team (with most of the same players) failed to make the Open Division, and instead competed in the National Division. They channeled whatever disappointment they may have had into winning it. Whitmill said missing out on the Open Division served as motivation this year.

“They had something to prove and they’ve done well,” he said. “We won our region in Northern California. First place in regionals the weekend before.” 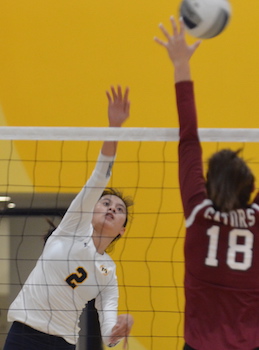 Selina Xu sends a hit over the net during a Menlo School 2017 match against Sacred Heart Prep-Atherton. (Photo c/o of Menlo School Athletics)

Xu is one of the standouts, hoping to play at Stanford. She played other sports when she was younger, including tennis, track and field and swimming. When she was in fifth grade, she went to an all-sports camp and fell in love with volleyball.

“My favorite thing about volleyball is it’s not just an individual sport,” she said.

“Everybody has a role on the team. I enjoy spending so much time with these girls, my wonderful teammates who are my closest friends today.”

Xu, who also plays at The Menlo School in Atherton, likes both high school and club play.

“High school is really fun because you’re playing with people you go to school with,” she said. “People come to your games and that’s really fun. There’s also rivalries.”

She added that the level of club volleyball is appealing as well.

“The fact you can travel and go to new places,” Xu said. “You build relationships with people from all over the country.”

Outside hitter Carissa McDonald has committed to play at UC Irvine. She was on Vision Volleyball’s Blue Team last year and moved up to Gold this season.

“Her improvement the last four months has been really fun to watch,” Whitmill said. “She came in this year and really stepped up her game. She has been our best passer. I would argue that had not been her strength coming in to this year.

“She has really worked hard to improve her game.”

McDonald played soccer and basketball when she was younger but has always loved volleyball. She said she has played it in the backyard with her dad for as long as she can remember. She started out as a setter, then moved to middle and then to outside hitter.

“That’s my favorite position by far,” she said. “You pretty much do everything. You do it all and you’re involved all the time.” 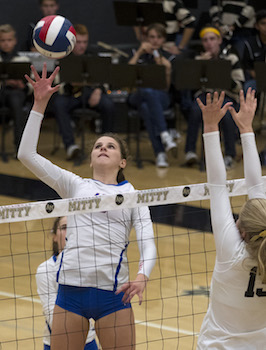 McDonald is very excited to continue her career at UC Irvine. She also plays at Pioneer-San Jose.

“Excited is an understatement,” she said. “I seriously can’t wait. I don’t remember a better feeling than this. Just feeling so set, so motivated, seeing my path. When I visited the school, it just felt like a perfect fit. So I’m super excited.”

“Both of our middles are pretty darn good,” Whitmill said. “For our team, that’s our strength. Our whole philosophy is we want to pass the ball, we want to get the ball to our middles and create opportunities for our outside hitters. We really depend on our middles a lot to score. When we get our middles involved, that’s when we’re at our best.”

Other players who have committed to colleges include outside hitters Jasmine Powell (Portland State), Melina Mahood (Princeton) and Amelia Browne (Yale). More are expected to commit in the future.

“Volleyball is such a team sport and everybody on our team is such a good player,” Xu said. “It’s a team chemistry that allows us to succeed. All of these girls are really great and definitely have the potential to play in college and have a strong impact.”