OAL3 SportStars of the week8 Ticker613
SPAAT Announces The 2019 OAKLAND ESPY AWARDEES A spat (common in sports, popularized by football) is an over-the-cleat ankle tape job that provides support...

A spat (common in sports, popularized by football) is an over-the-cleat ankle tape job that provides support to the ankle, allowing the player to better control his/her body movement and overall athletic performance.

No matter what sport they play, the organization helps them SPAAT up for life!

And over the of June 1st weekend, SPAAT helped the kids go to their next steps with the 6th Annual ESPY awards ceremony. Designed to recognize, honor and support student-athletes in the Oakland school district, the ESPYs awards students for working as hard in the classroom as they do on the field of play.

At this weekend’s spectacular, SPAAT Co-Founder & CEO, Harold Pearson said, “It is a privilege to honor and celebrate the academic and athletic achievements of our Oakland student-athletes.” 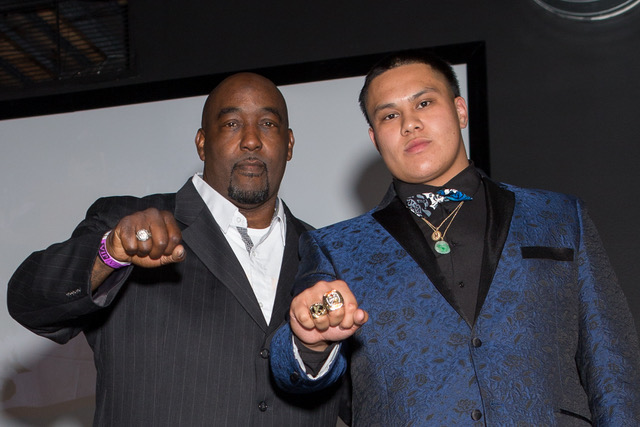 StrapemUpSports sponsored the Marvel A. Smith lineman award and championship rings, at this years’ ESPYs.

“As a product of the OAL, I believe in giving back to student athletes of the league that helped shape me into the person I am today. The lessons learned during my time in the OAL, gave me the skills and work-ethic to get a college education scholarship and a 25-year career as a mental health clinician. I’ll always be in their debt.” Dave Hill, Founder, StrapemUpSports

NBA Hall of Famer, NBA Champion and Skyline Titan, Gary Payton gave us his encouragement and vowed to increase his support of SPAAT students for years to come!

Todd Walthall, Executive Vice President of Markets at Blue Shield of California partnered with SPAAT and the Gary Payton Foundation to present over $18,000 in scholarships to Oakland student-athletes!

Strap’em Up Sports Marvel A.Smith award goes to Mark Ho’Chi, McClymonds who is headed to attend the Univ. Northern Arizona!