Katie Volynets Joins Tennis Pros At The US Open

High School / Club Tennis. USTANorCal2 MP504 tennis8 Ticker613
Talking on the phone with Katie Volynets, it was apparent the excitement of her victory hadn’t worn off yet a couple days after. Granted,...

Talking on the phone with Katie Volynets, it was apparent the excitement of her victory hadn’t worn off yet a couple days after. Granted, she had a great reason to be happy. The Walnut Creek resident had just realized her lifelong dream: qualifying for the main draw of the US Open. On Sunday, August 11, the 17-year-old defeated Charleston’s Emma Navarro 6-2, 6-4 to win the USTA Billie Jean King Girls’ 18 National Hard Court Championship. Thanks to that win, Katie earned a Wild Card into the US Open main draw.

The Clayton Valley Charter student said, “I am so excited to play in my first ever US Open main draw, I can’t believe it’s almost here,” the bubbly Katie, told USTA NorCal.  “It will be amazing to be able to play at such a high level! I want to make the most of my experience and make sure it will help me for the future.” 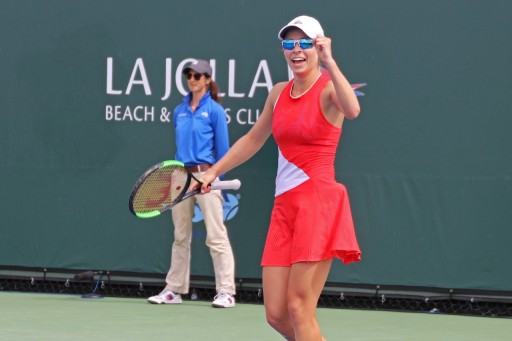 When asked about match point and what it felt like as she realized she was going to the US Open, Katie quickly responded that “it was a rush of emotions,” she said laughing. “At match point, I kept telling myself to run every ball but to be aggressive when I could. I was confident in my serve, which helped a lot.”

For someone who hadn’t played junior tournaments in almost a year, she sure didn’t look fazed. On the ITF Circuit since last September, the NorCal star adapted really well. “There is a big difference between the games so I had to adapt to that the first couple of matches,” she noted. “The pace is different as the girls on the ITF Circuit have a bigger ball. The atmosphere is also more social during the junior tournaments, so you have to get zoned in.” She was definitely zoned in on that Wild Card.

Wise beyond her years, Katie felt confident going into the tournament. “I was focused on my side of the net and not so much on results. We all have that in the back of our minds. But the morning of the final for example, I woke up excited and turned my nerves into excitement.” That focus helped her as she had to get passed three very good friends from Northern California on her way to the title. Playing Anna Campana early on, she then defeated India Houghton and finally Connie Ma in the quarterfinals. “They were all quality matches but once I’m on the court, I didn’t look who was on the other side. I focused on my game plan,” she said in her usual cool composed voice.

But the fun didn’t stop there. Katie received her trophy from none other than Billie Jean King herself. “That was unbelievable!” she bursted out. “This was probably as exciting as the match. I got to talk with her afterward while watching the Girls’ doubles final.” Curious to hear what an up-and-coming star and a legend talk about, Katie let us in on her discussion. “We talked doubles strategy mainly. She talked about being accurate and she was also pointing out specifics. I just tried to take in as much knowledge as possible,” she said giggling.

Her final analysis of the competition and moving forward to the US Open, she was extremely happy that her body held up the way it did. “It’s been a while since I played seven matches in a row and doubles. And this is the most fresh I’ve felt in a final,” she acknowledged. “The conditioning played a huge role in me doing well, knowing my body was holding up.” Back at home getting ready for the jump to the big league, Katie is ready to take it all in. “I’ve imagined it before, but it is now a reality and I couldn’t be more excited.” 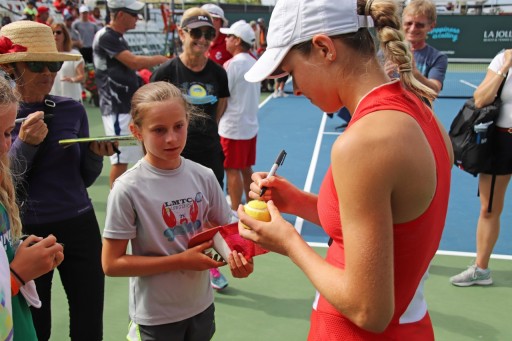