EBAL16 Matt Russi1 Monte Vista17 MP504 Nate Rutchena3 Ticker613
A Multi-Sport Standout And Starter On Both Sides Of The Football, Rutchena Leads A Senior Core That Has Monte Vista Among NorCal’s Top 10...

A Multi-Sport Standout And Starter On Both Sides Of The Football, Rutchena Leads A Senior Core That Has Monte Vista Among NorCal’s Top 10 Teams •

With the first game of his senior season hanging in the balance, Monte Vista football star Nate Rutchena went to a familiar move.

Sometimes it’s as simple as boxing out.

A fundamental from the hardwood served the Mustangs’ two-sport star in good stead as he made the decisive catch in Monte Vista’s 27-22 win over Granite Bay on Aug. 23. The catch itself came straight out of the teaching template. Quarterback Jack Stewardson lofted a pass to Rutchena’s outside shoulder, giving his teammate a chance to use his 6-foot-3 frame to make a play over a shorter cornerback.

Rutchena planted with his right foot and elevated. He shielded the ball with his body and by the time the defender got a hand up to contest the play, the man in black was already on his way to the ground with the game-winning score secured.

“That’s basketball,” Rutchena said through a chuckle. “Coach (Nick) Jones, shout out to him. That’s a box out.”

One of the Bay Area’s premier two-sport athletes made the first game of his final football season in Danville a memorable one. He hauled in 10 passes for 128 yards and three touchdowns. He also made his presence felt on defense, making plays all over the field. That included pulling down the game-clinching interception on Granite Bay’s final drive. 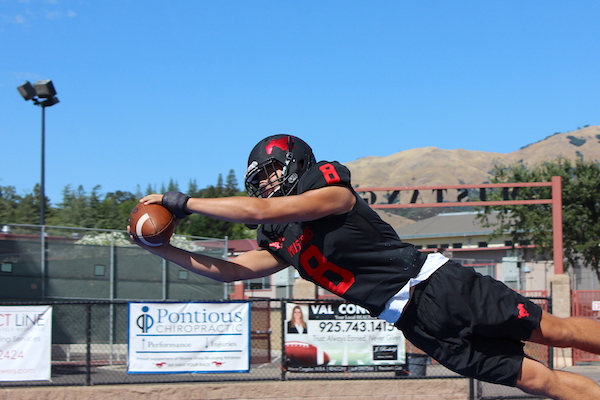 Rutchena’s versatility comes from more than athletic ability, and it is that entire package that has college football coaches salivating. Most recruiting sites list him as an athlete. Cal, Nevada, Air Force and San Jose State are among those have already offered scholarships.

Offensively, it isn’t hard to find him.

In Monte Vista coach Matt Russi’s offense, Rutchena lines up outside to provide a big target for fellow senior Stewardson to key on.

Against the Grizzlies, Rutchena showed his possession abilities. He stopped on a dime to make a first down catch on the sideline. He also showed his speed.  His second touchdown of the night came when he outran the secondary and Stewardson dropped a 40-yard dime over the defense.

But while his talents on offense jump off the stat sheet, his defensive versatility might make the biggest difference for the Mustangs. Against Granite Bay, Rutchena lined up all over the field. At times, he played center field as a safety. Soon thereafter, he found himself lined up on a Grizzlies receiver in the slot. And he even dropped into the box, coming off the edge on a backside blitz. 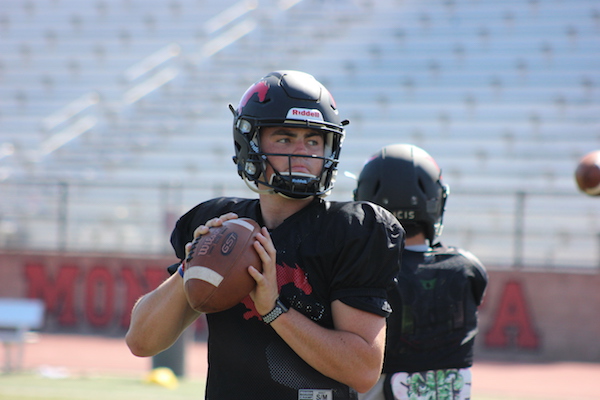 “We designed the defense around him this year,” Russi said. “He’s a better defensive player than offensive player. He doesn’t like me saying that, but it’s the truth.”

His consistent output is already a luxury for Russi and the Mustangs, but Rutchena’s value doesn’t stop with talent. The ability to adjust on the fly is just as important and just as impressive.

“He does stuff on defense that we don’t teach him. It’s just pure instinct,” Russi said. “He sees something one time and the next time they come back to it, he’s got it. He’s a stud on defense. The way we play our defense is based around his versatility.”

In the age of specialization, Rutchena also represents a throwback in more ways than one. Rarely coming off the field on either side of the ball, his ability to stay in the middle of the action allows him to maximize his impact on the game.

And perhaps that comes from his two-sport profile. Once he moved into the gym during his junior season, Rutchena’s basketball accolades were just as impressive as those garnered on the gridiron. He averaged 15 points, seven rebounds and five assists per game for Jones’ Mustangs to earn first team All-East Bay Athletic League honors. 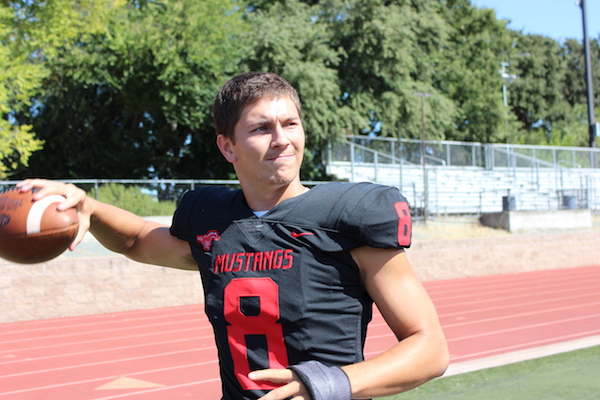 Rutchena plays catch with a teammate during a late August practice.

Oh, and he’s able to play both ways in basketball, too. He also led Monte Vista in steals. Whether applied to offense, defense or team intangibles, drawing parallels between the two sports has proven valuable.

“The touchdown, that’s boxing out and going up to make a play. When you’re guarding a guy one-on-one and playing in front of him, he’s trying to dribble past you and you’ve got to stay in front,” Rutchena said. “Screens are like offensive linemen. You’ve got to figure out a way to get over or under it. (Playing multiple) sports is helpful. Even baseball. That last play, you’re a center fielder. You read the quarterback’s eyes and you go make the play. Any sport can help you.”

Even with an abundance of talent to draw on, Rutchena also has a firm grasp on the bigger picture of team success. He joined classmates Stewardson, Connor Shay and Zach Schriefer as captains for the season opener. All four took the field as three-year starters for the Mustangs. Russi underscored that point after the game when discussing the resilience that proved critical in beating the Grizzlies. 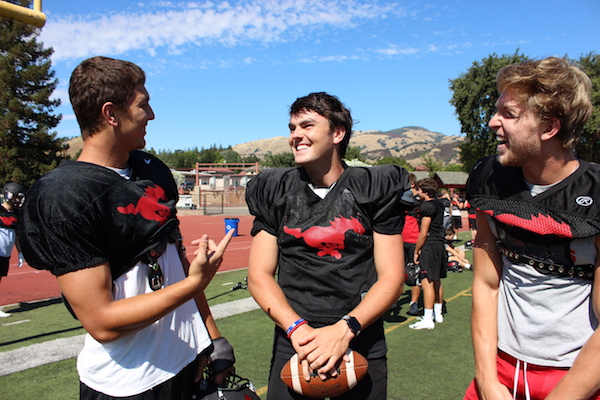 The opportunity to fill that leadership role is one Rutchena takes seriously. He knows the chance to set the right tone might prove critical as Monte Vista navigates one of the state’s toughest schedules.

In addition to always-tough Granite Bay, the Mustangs will play Northern California heavyweights San Leandro, Liberty-Brentwood, Bishop O’Dowd-Oakland and De La Salle-Concord. That’s in addition to an always-tough EBAL campaign which also includes Clayton Valley-Concord for the first time in 2019.

“We had a great leader last year in David Hayward who’s off at Army now. But Coach Russi pulled me and Shay and Stew together and said hey look, we go as you go,” Rutchena said. “If you guys are slouching, we’ll all be slouching. If you guys have intensity and excitement, we’ll have that same thing.”