A Dominant State Champion Cross Country Runner As A Freshman A Year Ago, Del Oro’s Riley Chamberlain Isn’t Shy About Her Olympic Aspirations •

She prefers to train in a chatty group. But in competition, Riley Chamberlain has only the trail and her thoughts for company.

“I will think about school, or where I am running and how pretty it is,” California’s reigning all-division cross country champion from Del Oro-Loomis said on Sept. 18. “I’ll think about how my breathing is, and how I’m feeling.

“I never get bored, even on the track. It just makes me happy.”

All that running would drive most people crazy. Even Chamberlain is sometimes led astray by the occasional talking rabbit.

In August, Chamberlain opened the new campaign by bolting for a blistering 5-minute, 25-second first mile at the 4,000-meter Oakmont Invitational at Roseville’s Maidu Park. She was so fast, that she began to lap trailing runners in her second mile.


Not realizing she was the leader, one of the tournament’s student volunteers assigned to guide runners (cross country calls them rabbits) erroneously directed her to complete a lap she had already finished. She ran 400 meters off course, and connected with the main pack at the last moment, albeit still winning the race by six seconds.

Only one of California’s most prolific distance runners could overcome a 400-meter gaff. And — imagine Del Oro’s “Black Hole” chanting this — She’s A Sophomore! (clap, clap, clap-clap-clap). 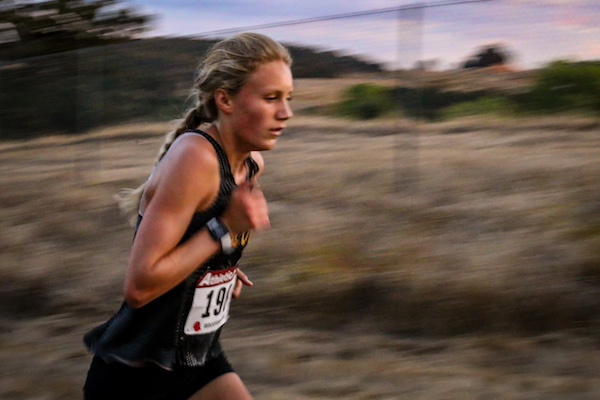 Chamberlain delivered the third-fastest time by a freshman in California Interscholastic Federation history last year. She led all divisions with a 17:19 finish at Woodward Park in Fresno.

“It was pretty awesome,” Del Oro coach Dustin Fee said. “She was heavily favored in Div. III, by over 50 seconds, but no one was talking about her at state. The fact that she had the fastest times among all divisions is pretty cool.

“We found out last year she is the real deal, and can compete statewide, nationwide.”

Powerful but lanky, loaded with talent and ultra-dedicated to her sport, Chamberlain is a physical gift to the trail and track.

And it’s outrageous luck, or perhaps divine intervention, that she is at Del Oro instead of Sierra Foothill League rival Folsom, where she spent her early youth.

The Buffalo Chips Running Club alum, not yet arrived on the national stage, wandered into Loomis when her grandparents departed for a church mission trip. While house-sitting, her family fell in love with the area, and soon moved to the green hills of Placer County.

This is where Chamberlain’s running career really took off, thanks to her father, Damon Chamberlain.

Damon, who was third in the 1,600 at the 1990 track and field state championships, ran at Weber State. He even qualified for the United States Olympic Trials in 2001 (steeplechase). 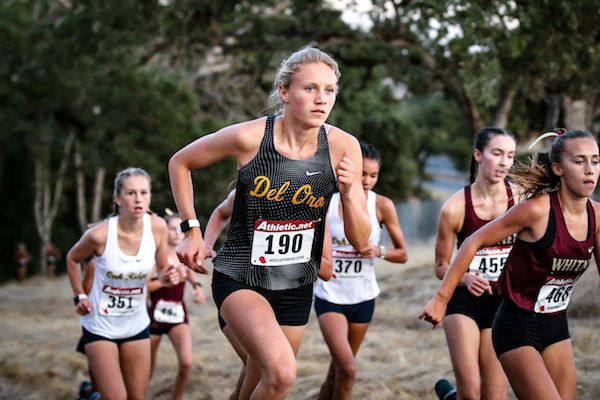 Riley Chamberlain works her way through a field of competitors on the Willow Hill course in Folsom.

She introduced herself at the 2016 USA Track and Field Junior Olympic Championships, finishing second in the 11-12 division 3,000 meters.

When she introduced herself to Coach Fee, he had no idea what was coming.

“I had heard murmurs about her being a good runner, but really had no idea to what extent or what she would be,” Fee said. “At the time we had Cathilyn McIntosh (2018 800-meter state champion in track and field), a big racehorse for us, and I learned quickly that Riley didn’t have overall top speed like Cathilyn, but that she was a legitimate distance runner.”

Riley’s time on the sub-18-minute 5K waiting list was short-lived.

She met her season goal by the fifth event of the season — only her second shot at the 5K — at the Stanford Invitational, where she ran a 17:58.2.

Ten days later, she stunned even her own coaches. She ran a 17:12.7 to finish second at the 40th Annual Asics Clovis Cross Country Invitational, finishing second to only Great Oak-Temecula runner Tory Gaitan in a field of 158 runners from top West Coast programs.

Riley would cruise to wins at the Bella Vista Bronco Cross Country Invitational (17:43.1) and the SFL Championships (18:17.5). She’s follow by setting her new best time (17:57.0) at Willow Hills in Folsom, known for its daunting elevation changes.

A week later, she won the state meet with a 17:18.6, beating Gaitan’s winning time from Div. I by just under one second. 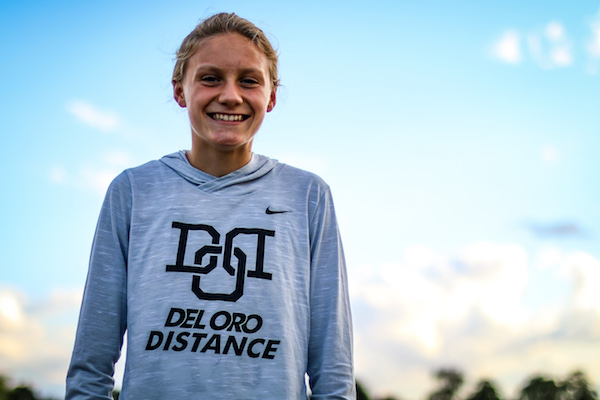 “That was a great season and it made me super happy,” Riley said. “It was amazing.”

The next week, Gaitan would go on to finish a high school All-American (top 21) at the NXN Nike Cross Nationals in Portland, while Riley struggled to a 62nd place finish.

It’s why Riley named Gaitan, along with Buchanan’s Corie Smith (both seniors) as her rivals to watch in 2019.

Smith is the only non-graduate to beat Riley in a 3,200-meter race during California’s 2019 outdoor track season.

Riley won the 15th Annual CSUS HS Track Classic, the SFL Championship Finals, Sac-Joaquin Section Div. I Championships and SJS Masters by an average winning margin of over 28 seconds. At state, her 10:21.31 was good enough for a lifetime personal best, but Kristin Fahy (now at Stanford) won the race with her own personal best of 10:11.38. Smith (second) also hit her top mark at 10:17.39 in second.

Riley said she sets small goals and progresses by hitting those marks, but readily admits Olympic medal dreams. It’s the holy grail for track and field athletes and each little step in Riley’s career pushes her toward it.

This fall, Riley wants to break the 16:40 mark on a 5K course. Even within that goal are some littler ones still.

“I’d also like to be an All-American at NXN. I was really nervous there last year.”

She has some help on that.

Fee explained that running coaches carry the load of managing peak performances from athletes. Riley was trained to peak at state last year. She purposely reduced her vigorous training in the days leading up to it. This year, she will keep pushing through state, with her heart set on All-American status.

It’s within her grasp.

“When you get kids with special talent that also put in a lot of work, they are going to be excellent and shine like no other,” Fee said. “I don’t think there is a single girl in the state of California that could outwork Riley Chamberlain.

“Her attention to detail to maintain a healthy body and continue to improve is absolutely phenomenal, and she has a strong mindset that will carry her far.”

It helps that Riley’s body seems to have a “make me a runner” mind of its own. She’s allergic to dairy and gluten, and her stomach is upset by sugars.

“I don’t even remember what most of that stuff tastes like, so I don’t miss it,” Riley said with a laugh. “It’s been six years since I had a chocolate milk.” 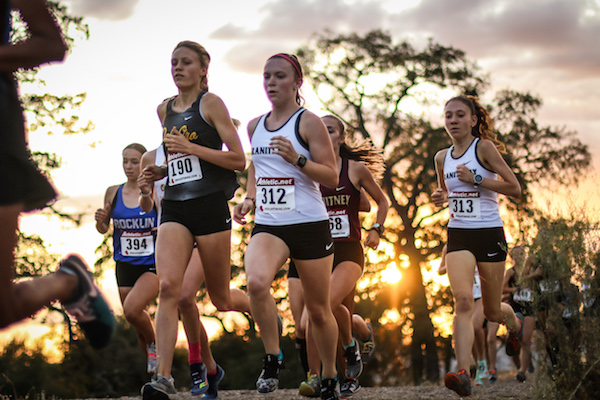 The sun sets on the foothills as Riley Chamberlain glides with the lead pack.

A good finish at nationals will make recruitment a little easier. Riley isn’t committed to a collegiate program, but she has her top three schools — Oregon, Colorado and BYU.

Counting this year, Riley has six seasons of running at Del Oro (three each of cross country and track) before she can plan a move to TrackTown USA. She doesn’t mind.

“I’m really close with all the varsity girls on my team,” Riley explained. “We do everything together, go swimming and get smoothies after practice.

“Everybody at Del Oro is really encouraging. I have a lot of friends who tell their friends what I have done, so cross country gets a lot of recognition.”

“She is an extremely humble runner, and better yet, loves her team.” Fee added.

When she isn’t running, Riley is still-life drawing, playing the ukulele and playing the piano even better. She loves that her entire family is consumed by the same sport (Ronin and Karissa are already on the Buffalo Chips) and likes nothing better than a great conversation over about 12 miles of trail.

Her coach expects to see her excel as a collegiate steeplechaser, but there isn’t a distance that seems out of her reach.

She would run to the moon if a rabbit told her to.