Granite Bay and Del Oro High faced off in a football rivalry game between former state champions on Sept. 20. But it was more than just a football game. And that’s exactly how The Honor Group presented the Hometown Honor Bowl: A Salute to First Responders.

In its 10th year, The Honor Bowl has featured some of the top football programs in the country. It’s considered among the best showcases in high school football. The 2019 versions featured tripleheaders in San Diego and the Bay Area before coming back to where it all began.

Honor Group founder Mark “Coach” Soto coached at both Granite Bay and Del Oro. And with The Honor Group’s office in Placer County, it made the 2019 Honor Bowl finale such a special occasion.

“We are honored and blessed to have two communities come together for an event like this,” Soto said postgame. “For the community to come out and show the respect and honor for the veterans and Gold Star families, that’s the stuff that drives me.” 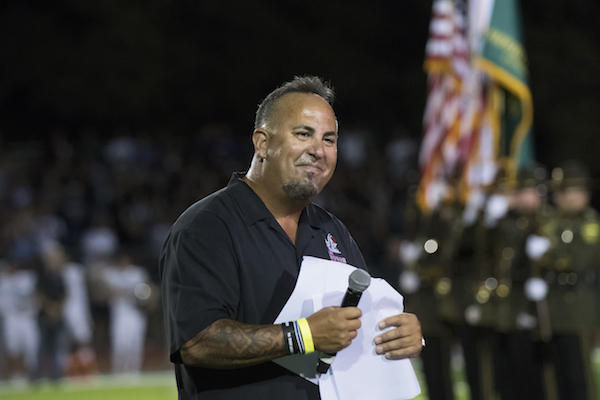 The Del Oro community likely enjoyed the Golden Eagles’ 28-10 victory more that its Granite Bay counterparts. Yet, the collective Placer County community enjoyed a night of events that paid tribute to fallen and wounded veterans as well as regional law enforcement, fire and medical professionals.

Pre-game activities included the recitation of the Pledge of Allegiance led by 98-year-old World War II veteran Louis Conter. Conter is one of just three remaining survivors from the USS Arizona at Pearl Harbor. Del Oro senior Rosemary Reuter’s followed him with a stirring rendition of the National Anthem.

They were powerful patriotic moments. But none more than what followed. 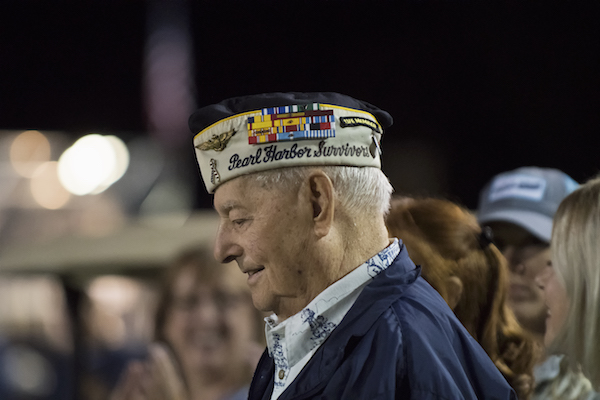 Louis Conter, 98, is one of three surviving members of the USS Arizona, which sank during Japan’s 1941 attack on Pearl Harbor.

Six Gold Star families took the field to create a Battlefield Cross at midfield. This ceremony is performed for soldiers killed in battle. It typically takes place on the battlefield or at the base camp.

A crowd of more than 5,000 football fans fell silent as the families took turns in building the symbolic cross with a rifle, combat boots, helmet and dog tags.

“I have never been to an event ever with about 5,000-6,000 people that were so quiet during the ceremonies,” said retired Placer County Sheriff Ed Bonner, who is also a Del Oro graduate. “How does that happen?

“It happens because these people are engaged and they care and understand the sacrifices made (by the fallen soldiers and their families). This does wonders to bring us all together to give us that moment to reflect on what’s really important.” 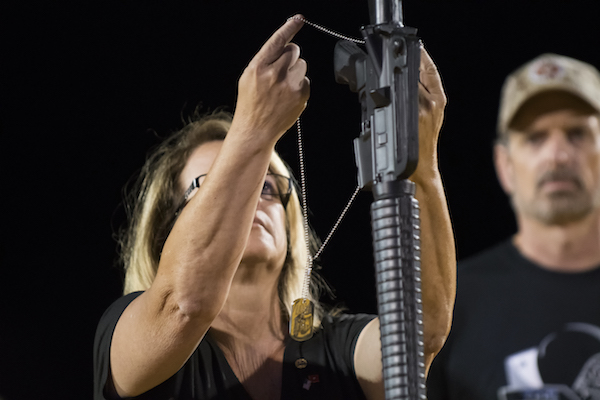 A Gold Star family member hangs a pair of dog tags on a the battle cross constructed during pregame ceremonies.

Soto established The Honor Group in 2010 when both of his sons were deployed in the Middle East. He wanted to educate communities — especially high school students and athletes — about the sacrifices of the military. His goal was always to honor fallen and wounded soldiers through high school football —his other passion.

The 3rd Battalion, 5th Marines conducted operations in the Sangin District of Helmand Province, Afghanistan, in support of Operation Enduring Freedom between September 2010 and April 2011. Twenty-five of the battalion’s Marines died in action. Approximately 200 suffered major injuries, many lost limbs.

“(The Honor Bowl) just gives it cut and dried. Our veterans died for you to play this game, and you can give a little respect for the country that does that,” Joshua Soto added. “This is why we do it.”

First responders received the halftime spotlight. The Placer County Sheriff’s Department was out in force. Local police and fire personnel joined in— many of whom are veterans themselves. 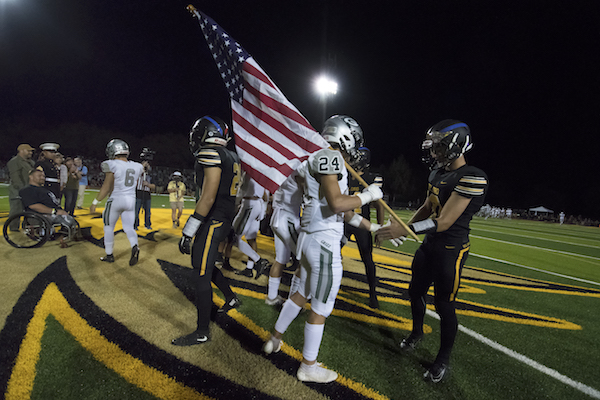 “I know the resources that we can bring to bear in this county, as a collective of our law enforcement partners, the fire community and medics,” Bonner said. “This community is blessed to have the men and women in the shadows who are ready to go at the drop of a hat. I think what Mark and the Honor Bowl does is give people a chance to publicly say ‘Thank you.’”

The Placer County Sheriff’s Honor Guard presented the colors before the game. It also performed a flag-folding ceremony at halftime to present a flag to a Gold Star family. The Sheriff’s K-9 team gave a demonstration, and the Honor Guard added a 21-gun salute as a prelude to the playing of “Taps.”

A presentation of a custom fit carbon fiber track chair to wounded 3/5 Marine Tommy Parker highlighted the halftime events. Parker lost both of his legs and a major portion of his left hand in an IED blast in Afghanistan. He began competing in marathons in recent years using his everyday wheelchair. Parker will now have new wheels in his goal to participate in the Boston Marathon. The Honor Group purchased the chair through donations and Honor Bowl proceeds. 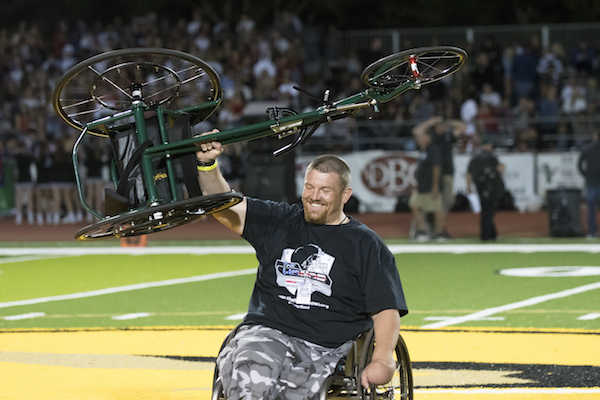 Former Marine, Tommy Parker, holds up a new carbon fiber track chair that will help him participate in marathons.

Following the game, Coach Soto gathered the teams at midfield to present both teams with sportsmanship and MVP awards. Soto may have been more tired than the players, as the former assistant coach displayed his passion for the final public moments of a three-week football and veteran appreciation extravaganza.

Then he took only a quick breather.

“We’ve already started reaching out to teams for next year,” Soto said.

“We’ve been blessed and honored to have so many people come underneath us,” he said, referencing Honor Bowl sponsor, the San Francisco 49ers, and a whole host of other contributors that have helped his vision flourish.

“Seeing e-mails from principals and athletic directors, teachers, athletes, students and media telling you how much they respected the events and appreciated it, is humbling,” Soto concluded. 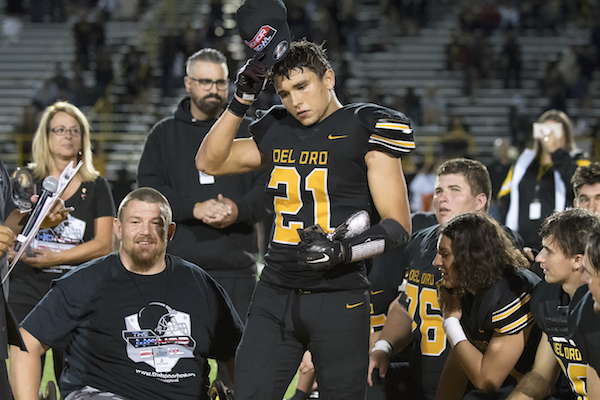 Coach Soto and The Honor Group have built a football showcase like no other. It truly is more than the games that make up the annual events.

Said Bonner, “Mark epitomizes the dedication and is the heart and soul of this event. There are so many moving parts for an event like this, but there is only one heart.”

And the beat goes on.

To learn more about The Honor Group or to contribute to the organization, visit https://thehonorgroup.org/.