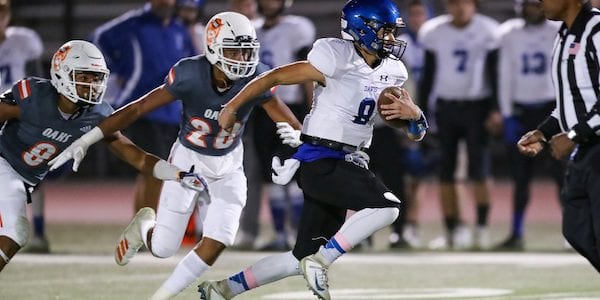 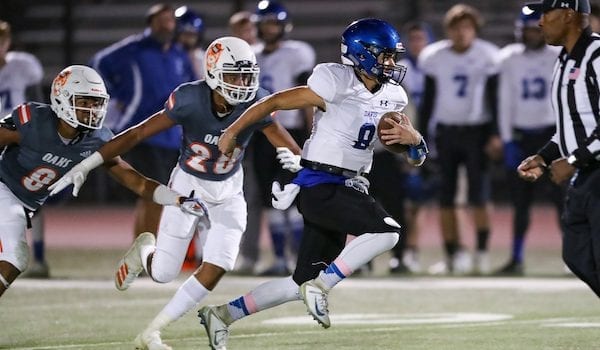 Davis Football: Rise Of The Devils

YEAR OF ASCENSION: Two Years Removed From An 0-10 Season, The Blue Devils Roll Into The SJS Playoffs As 9-1 Delta League Champs •

A series of blue and white banners hang on the wall of the Davis High gymnasium. Each symbolizing athletic success by sport. While the basketball, track, baseball and softball teams display numerous championship years, the banner dedicated to the Davis football team is surprisingly bare.

“It’s in the big gym, and it lists all of the dates when we’ve won a league title,” Davis senior Taylor Vaughn explained. “And we haven’t been league champions in 25 years. You see 1994 up there and you realize that our program hasn’t been rising for a long time.”

That soon will change thanks to a three-touchdown performance from Vaughn and a stout defensive effort in a 27-14 road win over Cosumnes Oaks-Elk Grove to wrap regular season play.

“To come out with this (win), especially with the amount of hard work we put in this offseason, it just means so much for this team,” the senior running back continued. “It’s just an indescribable feeling.”

The victory marks the first Delta League title in program history. It also capped a 9-1 regular season and left the Blue Devils sitting atop the standings with a 5-1 mark. They host Gregori-Modesto (6-4) in the opening round of the Sac-Joaquin Section Division I playoffs at 7 p.m. on Friday. 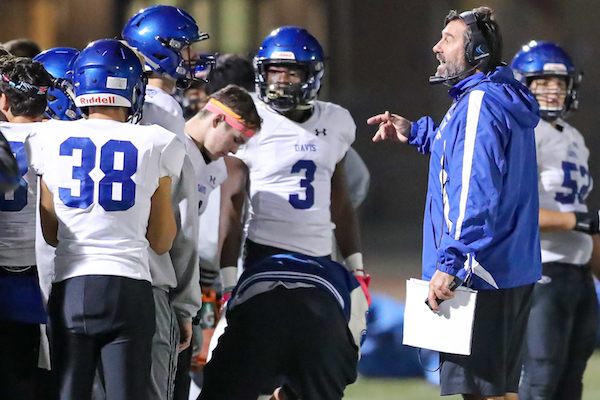 Steve Smyte is in his second stint as the Davis football coach. He recognized the success Davis teams enjoyed in the 1980’s under Dave Whitmire, who has since returned to help coach the kickers, but Smyte knows first-hand how the program has struggled the last two decades.

“It just hasn’t fallen for us, for whatever reason,” Smyte explained. “But I knew this team was special.”

Smyte regained control of the program following an 0-10 season in 2017. Many of the team’s key contributors from this year’s group were part of that team. Thanks to resiliency, maturity and trust, the team found a way to right its ship.

“It’s not like we had a road map for how to get there, but the guys have to buy in,” Smyte said. “When I came in two years ago… we were 0-10 and the first thing we needed to do was develop trust. They were not a cohesive team.”

The coaching staff didn’t talk about execution, football or the X’s and O’s early in 2018. Rather, they built the foundation of a winner from the ground up.

“We didn’t even talk football for the first two meetings. It was about character, it was about trust,” Smyte explained. 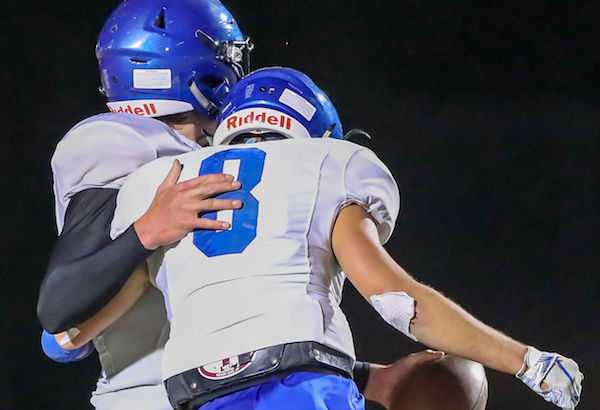 It was the year of redemption, and his players backed up his talk with a 6-5 mark that led to the team’s first playoff spot in two years.

Fast-forward to 2019 and Smyte’s so-called ‘year of ascension.’

“These guys bought into it in the offseason,” the coach said. “I mean, there’s so much love, and trust on this team. These guys, I have to kick them off the football field after practice. Because they’ll stay out there and hang out together, and I have to tell them to go home and study. They just love being around each other… and that’s more important than a championship. It’s more important to have that feeling of brotherly love.”

The team’s camaraderie pushed the team over the edge this season. Smyte says every team in the league has talent, but he commends his staff for adapting the system to the players and for the sacrifice the players have made.

“We’ve got guys who are great players, and never once have those guys said, ‘I want the ball more, or give me the ball more,’” he pointed out. “They all support each other.”

The veteran coach showcased his two quarterbacks as prime examples. His left-handed underclassman Luke Carrell has thrown for over 1,000 yards with 16 touchdowns and just three interceptions, yet he dropped back just nine times and completed three passes in their win over Cosumnes Oaks. 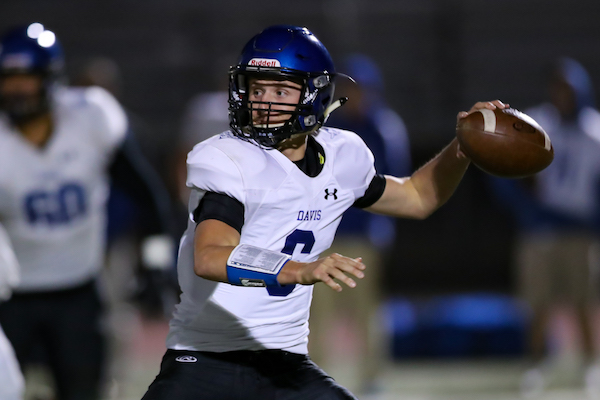 Luke Carrell is the passing threat in the Davis two quarterback attack.

“This week, we thought we could run the ball a little more, but other weeks, like against Woodland, we thought we could throw the ball,” Smyte said. “…so we have the ability to (switch it up). We wanted to be well-rounded, because the further you go, you can’t be a one-trick pony. You have to have some balance in your offense.”

Smyte’s other quarterback, senior Payne Barksdale, is that multi-trick pony. He can drop back and throw it, he can run it, he can catch it and he can play defense. On Friday, he carried the ball 16 times for 69 of the team’s 264 yards. He also caught another ball and completed his only pass attempt.

“I just want to do whatever I can for the team,” Barksdale admitted. “Whatever I need to do to help us get the W, I’ll do.”

Barksdale and Vaughn kept the Wolf Pack defense on its heels most of the night. Vaughn recorded the first touchdown on the team’s opening series, capping the drive with a three-yard TD. The defense recorded a fourth-down stop and Vaughn nearly broke open the game with a 29-yard scamper up the middle, early in the second quarter. 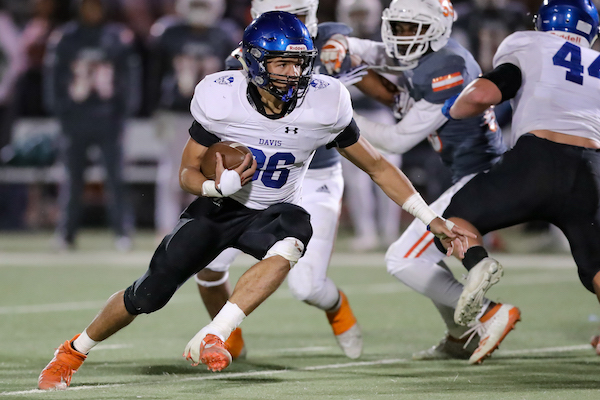 Taylor Vaughn makes a cut to get upfield during his three-touchdown game against Cosumnes Oaks-Elk Grove.

“I have to give props to my o-line,” Vaughn admitted. “They were great all night, especially on that run. They blocked up to the second level and I just had to put a spin move on the safety and I was off to the races.”

If not for a shoe-string tackle, Vaughn would have taken that carry to the house. Instead, he capped that drive with his second, three-yard touchdown plunge.

The senior added one more score in the second quarter to give him a total of 12 rushing scores this season as the Blue Devils took a 20-0 lead.

Davis’s star lineman Gerad Christian-Lichtenhan, a University of Colorado commit, helped open those holes on offense and added pressure on defense. That pressure contributed to a sack for fellow senior Marquist Allen.

“I was a sophomore on that 0-10 team, so it’s been a long time coming,” Christian-Lichtenhan said. “Last year was our redemption and this is our year. The year of the Devil.”

Midway through the third quarter, Christian-Lichtenhan and the offensive line held off the Wolf Pack pass rush just enough for Carrell to find receiver Joey Asta, who scampered 53 yards to the house for a 27-7 lead. 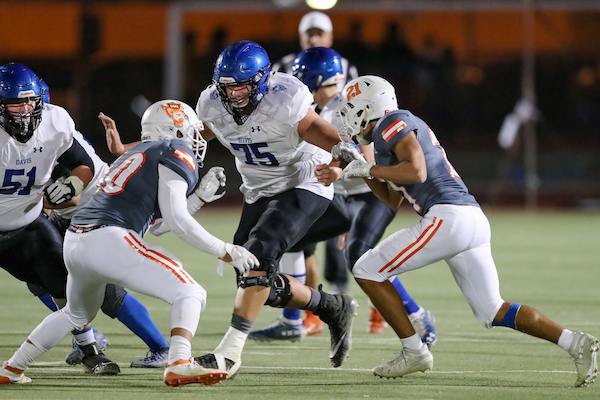 Colorado-bound lineman Gerad Christian-Lichtenhan, center, relishes his chances to take on two defenders at once.

“We knew on third down that they like to blitz, and we worked that all week with that outside move and then coming inside,” Smyte said. “And Luke stood in there, waited for the break. They were bringing everybody — and that takes courage — and he stuck it on him.”

The lead was too much for Cosumnes Oaks and eventually Davis ran out the clock and sealed the win. Players stormed the field, jumped and celebrated history. Finally, that blue banner hanging on the wall of the gym will get an update.

“It feels damn good,” said Smyte of the league title. “After 25 years, it feels good.”