FLASH OF THE TITANS: Do-Everything Recruit Jzaniya Harriel Leads An Antelope Team Full Of Guards Bent On Out-Running, Out-Shooting And Outlasting Anyone •

Squeaking sneakers scramble to midcourt during Antelope’s girls basketball practice in early November, Jzaniya Harriel and her teammates then dart toward one of six baskets that flank the center of the hardwood.

The fleet feet stop beyond painted arcs as players catch a pass and pause to launch a 3-point shot, before returning to midcourt. The first to three (sometimes five) treys avoids push-ups.

The ultra fast-paced drill that closes Antelope’s practice is a good preview of what’s to come for the reigning NorCal Division I semifinalists, who return nearly every piece of a dynamic 31-4 squad and operate a relentless system entirely comprised of sharpshooting guards.

It’s not quite “The System,” the frequent-subbing, point-surrendering, 3-point-reliant style of basketball developed at Grinnell College — but it’s not far off.

Without a true post player, Antelope will assault the basketball with deliberate intentions to score at least 80 points a game. It’s the lesser of two remarkably honest team goals that players and coach Sean Chambers will readily admit too.

The other is a CIF championship.

“I believe that with young athletes everything is about expectations that you set and let them fulfill,” Chambers said. “We are not coming like ‘Let’s see where we land and hope for the best.’

“We know we have a special group.” 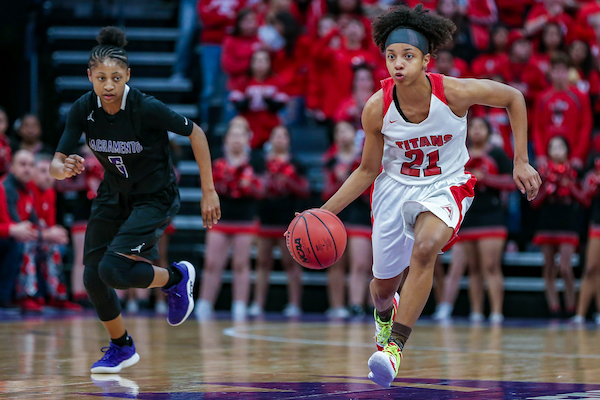 Harriel pushes the ball up the floor during the SJS Div. II championship against Sacramento at Golden 1 Arena last February. (David Gershon photo)

Chambers said Harriel, a junior, is Northern California’s top recruit for the class of 2020 or 2021

“I think Jzaniya is just ahead of the game, ahead in life,” he said. “She pushes herself everyday, and is probably out there right now, finding a way to train away from practice.

“It’s what makes the great ones great.”

Harriel led the state in scoring last year (797 points). She was second in free throws made (189), ninth in 3-pointers made (96) and second in double-doubles, a feat she managed 26 times after grabbing 434 boards.

Though she sports a GPA of nearly 4.8, Harriel literally can’t count the number of college coaches and recruiters she has spoken with. She recently visited Stanford and has received offers from Loyola Marymount, Cal Poly, New Mexico, Purdue, Santa Barbara, Washington State, UC Irvine, UNLV, Northwestern, Hawaii and Sacramento State.

She participated in the Team USA Trials in May and won an Adidas Gauntlet Championship in Indianapolis with Just Believe Sports (JBS) two months later. 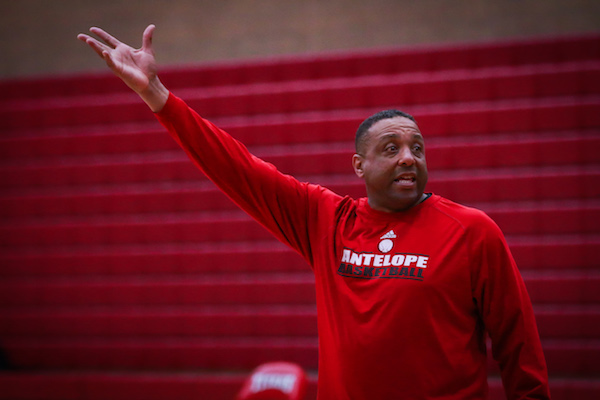 JBS is where Harriel was groomed, after joining middle school teams when she was in fourth grade. It’s where Chambers coaches many of the top talents in the Sac-Joaquin Section, year-round.

“Coach Sean and I get along very well,” Harriel said. “He and my dad are the only coaches I have ever really had.”

Jzaniya’s father, Mister Harriel, played professional basketball in France. One of his most memorable critiques was after Jzaniya landed a 40-point game.

“He told me I could have scored 50,” Jzaniya said with a laugh. “I didn’t mind, and I even agreed with him.”

Most young athletes would crumble under pressure like that, but Jzaniya flourishes. Growing up with seven siblings, all of them basketball players, she refuses to settle for second-best.

She said her competitive nature, not her shot, is probably her most recruitable attribute.

“I grew up in a big household, always wanting, needing to win,” she explained. “We competed with everything, and now my desires are getting rebounds, stealing the ball, scoring.

“The desire to win is always there.” 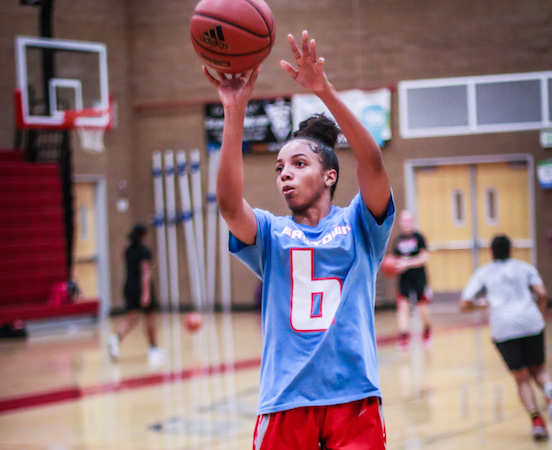 Games of Monopoly can be intense in the Harriel household, though Jzaniya’s five older siblings have already left the house. Jzaniya’s mother, Melissa, is the only one who can stay on her properties, rent free.

Jzaniya plans to be a judge one day, and expects the character she nurtured on the court to be vital in the courtroom.

That desperate drive to win, Jzaniya calls it #humbleandstarving, also ignites the roster around her. It’s all bolstered by year-round play with Chambers and JBS.

“I think Kaiija is the second-best player in Sacramento,” Chambers said. “She is an absolute phenom who came up on the eighth grade boys circuit, so when she came to high school she was overly physical and that got her into foul trouble.

“Now she has balanced her physicality and plays a unique and gifted style of play.” 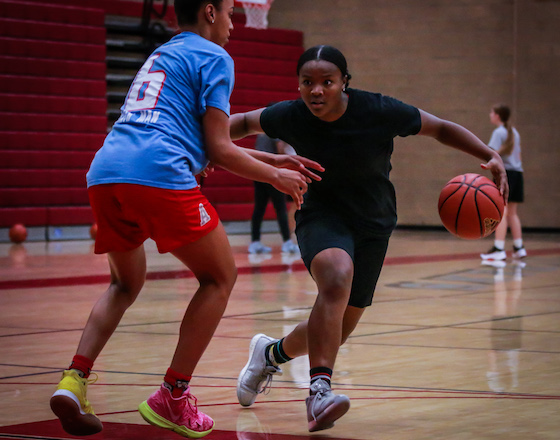 Antelope coaches and players all believe that Kaiija Lesane, right, is due for a breakout season in 2019-20. (Ike Dodson photo)

Lesane is also stronger, quicker than she was last year, and has learned a nasty fadeaway that nobody, not even Jzaniya, could guard in practice.

“I guess I would model it after Kobe Bryant,” Lesane said. “It’s a lot of pressure but I’m going to work to get there.

“I’m excited to see how far we can take this as a team. I’m pretty confident we will be able to win state.”

The confidence comes from a remarkable offseason that left Antelope undefeated in all fall and summer contests. In fact, the team won most games by at least a 25-point margin.

It’s tough to match the intensity of a squad that regularly rotates at least eight good guards. Especially when all of them are sharpshooters who manage a full-court press and post double-team.

Antelope will need most of the eight to stay consistent during the postseason, when a bad night of shooting could end the season. 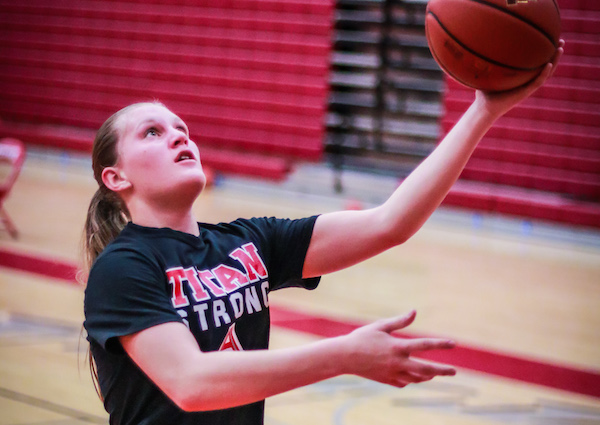 The Titans won the SJS title in 2018, but slipped to Sacramento in the Div. II finale Feb. 26. After the that loss, they rolled to consecutive state playoff wins, including a 53-48 upset of Heritage-Brentwood, NorCal’s No. 2 seed.

Sacramento graduated its top four scorers, while Bear Creek-Stockton, the team that ended Antelope’s season in overtime, returns sophomore star Junae Mahan, who scored 31 points against the Titans. The other star at Bear Creek, Mya Blake, has transferred to Edison-Stockton.

The reigning CIF Div. I champion, Rosary Academy, returns lots of talent, but will be without star guard Kate Goostrey, who tore her ACL during a showcase game on Oct. 12, according to the Orange County Register. 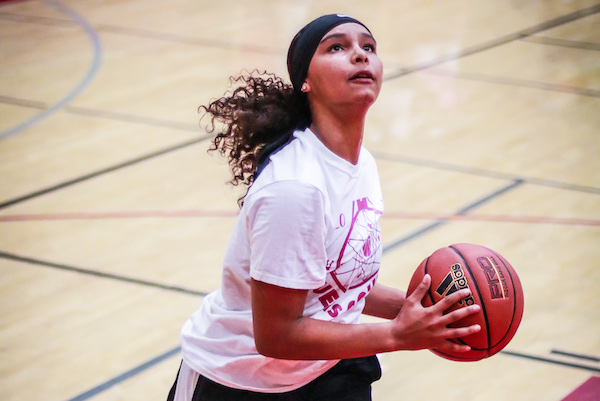 Freshman Ivy Babcock is expected to be a part of the Titans guard-heavy attack this season. (Ike Dodson photo).

The elite matchups are admittedly on Chambers’ mind as he loads his team with real ambitions for state hardware. He may roster the smallest lineup in the bracket, but expects to outwork everyone.

“I’m a lucky guy,” he said. “I think I became a great coach in the last two years because of this group.”

The SJS playoffs begin Feb. 17. Teams will need to condition all year to deal with Antelope.