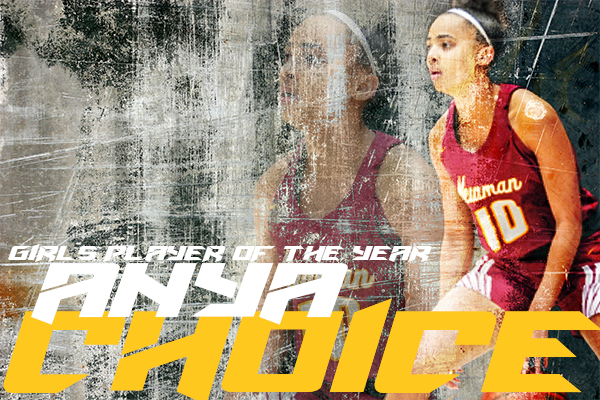 Anya Choice4 Cardinal Newman14 Monica Mertle1 Player Of The Year12 Ticker623
Cardinal Newman’s Anya Choice Was A Near-Unstoppable Force For The North Coast Section Open Finalists • We had a hand in her face,” recalls...

We had a hand in her face,” recalls Salesian-Richmond coach Steve Pezzola. “We had a hand above her face. Her release just got quicker and higher.

“I was definitely in a zone,” Anya Choice said. “I didn’t want to lose — I refused to lose that game. Every shot I put up was with 100 percent confidence.”

And they just kept going in for the Cardinal Newman-Santa Rosa senior, as she capped arguably the best season for a girl from Northern California with one of the most spectacular performances of any season: 43 points, including 34 of her team’s 39 in the second half. Cardinal Newman beat favored Salesian 64-59 in the North Coast Section Open semifinal.

“She didn’t really force any shots,” Pezzola said. “If she had an angstrom of room, she shot it. We didn’t do a box-and-one or double-team her because we knew she was a very good passer – and few players can score at will against our good defenders.”

But Choice scored all season, averaging 24.3 points a game for 29-4 Cardinal Newman, even though she was the primary threat that every opponent focused on. Don’t think, however, that Choice is just a volume scorer — code for a player who just shoots the ball every time down the floor. As Pezzola said, she’s an excellent passer and, as her coach with club team Cal Stars Kelly Sopak said, “She’s a bulldog defender.”

Choice’s success is no accident. Not only does she have a ferocious work ethic, she has basketball in her DNA.

She remembers being hooked immediately after she first played basketball with her cousins at family gatherings.

“I played a little volleyball in middle school,” she said, “and some soccer when I was young, but it’s always been basketball.”

She started playing in fourth grade, but it wasn’t until middle school that it began to dawn on her she could be pretty good at the game. “I realized that around seventh grade,” she said, “but a lot of people saw it in me earlier.”

And even though Choice characterizes herself as “a confident player,” one of the hurdles she had to overcome was believing in herself. She credits Mertle for helping her understand just how good she could be.

“She taught me to be mentally strong,” said Choice. “I would get down on myself, and getting over that was the biggest thing in my improvement.”

Well, that and her desire to be the best player she could be. “The special thing about Anya is her work ethic and drive,” Mertle said. “She’ll spend hours outside of practice working on her game.

“Two days after this season ended (in the NorCal Open semifinals), she was texting me to ask if she could get back in the gym.”

All of that work has paid off, as Choice has steadily improved throughout her career. “Every year, she’s expanded her game,” Mertle said, though sometimes it took some persuading.

When Choice first started working with Mertle, her coach told her she needed to work on her left hand. Choice replied “Why? I can get to the basket with my right hand any time I want.”

“She had a point,” said Mertle, but Choice laughs at the memory now. “Monica told me I was going to have to use my left hand, and I was shocked.”

But she worked hard to develop her off hand. Then she added a 3-point shot because “teams were sagging off me and it made me mad.”

The last piece of the puzzle —  at least so far — was the mid-range jumper. “In high school, most girls don’t have that,” said Choice, and she feels that addition was the biggest reason for her improvement.

“The jump she made last summer was remarkable,” Sopak said. Choice moved into the starting lineup for the Cal Stars —  a team stocked with Power 5 players that went 56-5 last year. “She became a shooter as she got more confidence. And once she got that outside game dialed in, it really opened things up.”

Choice’s strength has always been going to the basket. Once there, she either scored herself or found an open teammate (she averaged 4.1 assists a game last year), but don’t forget her defense. “She’s a tremendous defender,” said Mertle. “She would get disappointed if I didn’t put her on the other team’s best player.”

Still, offense wins fans, and Anya Choice has plenty of that. “She is awesome in transition,” said Shawn Hipol, whose St. Joseph Notre Dame-Alameda teams faced her in the past. “If she’s got a head of steam, you better have more than your little point guard back on defense.”

Choice is the prize in the UC Santa Barbara recruiting class, but her experience with Cal Stars made her aware of what’s ahead. “It was an eye-opener,” she said of her Nike’s Elite Youth Basketball League experience. “I realized there were a lot of good players out there, some better than me, and it motivated me to work harder. I have to get stronger and I have to improve my ballhandling.”

Since hard work has never been an issue, expect both of those aspects of Choice’s game to get better before she takes the floor for the Gauchos — and for her game to continue to grow after that.

After all, as Hipol points out, “She’s a fierce competitor” – and if you doubt that, just ask Salesian’s Steve Pezzola.