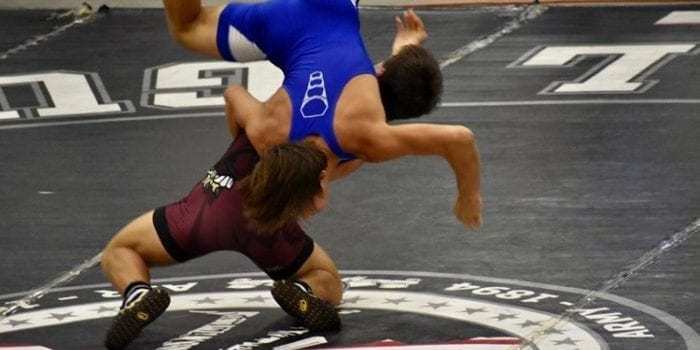 Recently, The Livermore Elite Wrestling Club (LEWC) entered six competitors into the 2020 Turf Wars Western States Championships hosted by The Legacy Center and USA Wrestling in Farmington, Utah. If Turf Wars was an appropriate title for the well-run, highly competitive USA Wrestling event—which offered three tournaments, one for each style (Freestyle, Greco-Roman and Folkstyle), one for each day—then the Livermore Elite Wrestling Club stepped into the battle and branded its reputation throughout the arena and onto the map.

Notable efforts and experience, the greatest of teachers, were made and gained by all.

In the high school division, Jackson Morgan competed at 157lbs; Vanden Caudillo at 130lbs; Tallon Chambers at 115lbs and Kekoa Ogawa at 130lbs in the 14U division. Although these gritty, aspiring competitors were not medalists, they gained a great deal of experience and an opportunity to compete and improve against elite level competition.

Carter Bailey grinded through the 125lb divisions, holding an outstanding record of 16-2 over the three days. On day one, wrestling eight matches within three hours, he earned a Greco-Roman third-place finish, followed by a Freestyle championship and then a Folkstyle championship. Both titles required him to defeat Cooper Birdwell, a formidable opponent to say the least.

Cooper was the Greco-Roman champion and walked away with the Outstanding Wrestler award. He is also a three-time Montana high school state champion said to be undefeated in his high school career.

Although Carter’s victories should not to be undermined, his Folkstyle championship was impressively matched by teammate Timothy Cowan’s 157lb championship, making LEWC’s performance at this historic grapple fest seem a monumental achievement. Their club’s success seems a grounded sign of the times and likely to become routine for these champions. And sooner or later, a unique wrestling crew, undoubtedly an honorable and noble team. Why? Because, once desire, hard work, and grit morph into an enthusiastic, passionate ambition, creating a vibe that’s just right—well, it’s just another day.

This battle-tested and experienced coaching staff (who also run the Granada High School program) have, through trial and error and raw experience, polished a systematic approach to building key fundamentals. They’re running a program that flares with more than merely a “Growth Mindset”. Their approach distills fear and insecurity in its wrestlers, whether classified at an intermediate or advanced level, so that they love practice, the sport, and competition.

When asked about a “Growth Mindset” approach to teaching wrestlers the martial arts of Greco-Roman, Freestyle, and Folkstyle grappling and the club’s immediate success, coach Bailey responded:

“It’s a product of what we built eight years ago when we started Tri-Valley Elite and these kids were all day-one wrestlers. It’s just a product of consistency, you know, and having the long game in sight and not just trying to be awesome as a nine year old and cultivating a love for the sport. These guys are in high school; they want to work hard; they want to be good. We just focused on building a good foundation, and then once they got in high school—it was time to get serious and go, and that’s what they are doing right now. We’re seeing it. We try to teach them good fundamentals. It’s about mastery of technique. Once they get the mastery down— of the things we consider fundamentals— we can start pushing the envelope. And, part of that is keeping it fun for the guys.”

When asked why they thought they were unique within the club and having this level of success, Timothy Cowan said, “We’ve been wrestling for a while, like since third grade, and, I guess, just always putting in the extra effort. From what I notice, I feel we are some of the hardest workers in the room.”  Carter Bailey added, “Yeah, I would agree with that. As a club, we work pretty hard and we focus a lot on technique. Our club has done that for awhile, and I think that helps us a lot.”

When asked what they are doing differently now or what has changed psychologically for them, helping them become Western States Turf War champions, Carter said:

“For me, I’ve definitely been working more. When I was younger, I just went three days a week, but now I do our practices, and I work out on my own, too— so I’m putting in the extra work. And then, I’ve been trying a lot more stuff in practice, not limiting myself. I’ve been trying more moves and watching a lot of video and visualizing much more.”

“After I got injured, my whole mindset, like how I view the sport, just changed because I knew what it was like to not have it. I completely redid my work ethic. Everyday I’m thinking about how can I get better and better, and then, like Carter said, studying a bunch of film has helped a lot and just being looser in practice, just doing what I feel like, just going with the flow of it. And you don’t hold anything back.”

Asked what it is about LEWC’s practice atmosphere that keeps kids coming back, coming to practice when its hard and maybe they don’t feel like showing up, coach Bailey expressed:

“I think it’s a couple things: it’s being positive. It’s just a relationship you get with the kids. They know when to pay attention, and they know when to work. We just keep it really positive. We aren’t trying to run guys into the ground—you know—physically, with our workouts. For me, what I really focus on is feeding the intellect, you know, teaching. They are always learning, and I think that makes people want to show up because they have fun with it.”

When asked why he thought the Livermore Elite Wrestling Club was successful, coach Jackson highlighted:

“We are a club that likes wrestling, and we’ve got something that we’ve built on for years. Just our Livermore Elite, now, so we have some strong fundamentals that we have been working on for years, so those building blocks we have in the program now are paving the way for these guys. And that’s kinda the coolest thing about it. We kept it all in house, so it’s all Livermore kids that are coming through our program. So, it’s like taking the Tri-Valley Elite group—which would have been a top ten team in State on the same high school team— and it’s making that a real thing instead of a dream… that’s the coolest thing about it.”

The Livermore Elite Wrestling Club will continue doing what they do and likely reach success at a national level. A shared goal expressed by Timothy, Carter and coach Bailey is for these elite grapplers to qualify and “compete” in the Super 32 Challenge, a national tournament held in Greensboro, North Carolina. If Bailey and Cowan’s recent achievements are a sign of the times, and if they continue doing what they do daily, whether they return with hardware or not, it will be— for these wrestlers on the rise— just another day.