Nine Months After COVID-19’s Arrival Abruptly Ended Its Start To A Dominant NCS Title Defense, The Amador Valley Boys Volleyball Team Hopes To Make Up For Lost Time — And Titles •

After tremendous flashes of exceptional success, the Amador Valley boys volleyball team is asking for one thing:

One final shot at greatness.

After an eyebrow-raising North Coast Section Division I championship victory in spring 2019, the Dons seemed destined for another NCS run when their season was abruptly halted by the Coronavirus pandemic and the shutdown of high school campuses and sports.

Just like so many others, a team with endless potential — boasting a 6-0 record in one of Northern California’s top leagues — could no longer compete.

That makes seniors who are the foundation of the team so eager to get a final chance.

Originally, that final chance was set to be part of the first of two seasons of sport under CIF’s 2020-21 amended calendar. However, the early-November COVID-19 spike forced the state to delay the release of updated youth sports guidelines. Realizing a December start was no longer feasible, CIF adjusted its calendar again to tentatively open in January 2021 and pushed boys volleyball back to the spring season (March-May)

“We lost a great opportunity this spring, so we are hoping to compete for another NCS championship,” Amador Valley boys volleyball coach Erin McFall said. “We hope we can have a good end to the nice run they have had together,” he said. 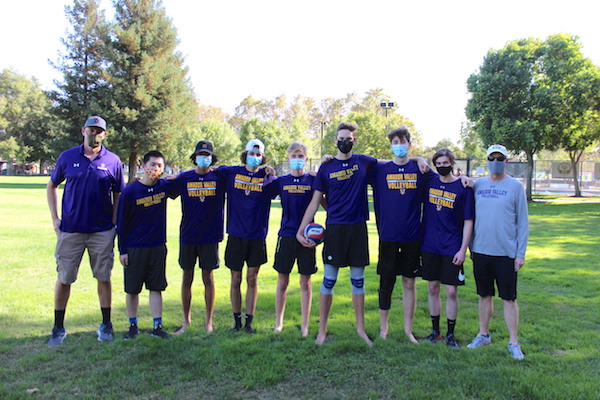 The Dons gear up for a potential season with most of the impressive cast returning, though setter Jacob Kim graduated and is now at Vassar. The core of the Dons have been together since middle school, where they also played under McFall. They are led by McFall’s son, Luke McFall, who is committed to Princeton. He has fingers crossed on prospects for a senior season.

“In terms of us playing games, who knows if that is going to happen?” Luke McFall said. “We have learned from this point to not take something for certain.”

The Dons’ original January-through-March schedule included a shortened season, with the East Bay Athletic League slated for eight league matches rather than 18 and divisional play strictly by county, either Alameda or Contra Costa.

“I’m really hoping for a senior season even if it is shortened, without fans,” said senior Devon Kost. “Honestly, everyone is expecting a season.”

Only the unexpected seemed to overwhelm the spring 2020 team, which went 6-0 in its first six EBAL games. Amador Valley was an absolute beast, sweeping five opponents and just losing one set to De La Salle-Concord. It all came to a screeching halt after a March 12 sweep of Dublin.

“It was certainly abrupt, and when it happened, initially I still had hope it would be a brief shutdown,” Erin McFall said. “We really have been feeling a sense of loss for last year.” 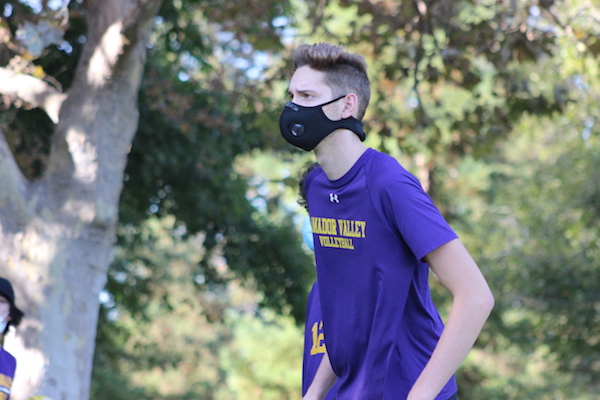 Luke McFall awaits a serve during a late October outdoor workout in Pleasanton.

“We were doing phenomenally,” added Luke McFall. “Our coach was saying that the Dublin match might be the last one, so we went in thinking it was like a championship match.”

Then came the stoppage. “We were hoping like everyone was that it was temporary. But then two weeks turned into a month, and we never went back (to playing).”

The roots of the 2019 NCS run came from Pleasanton Middle School. It was there where Erin McFall began coaching a host of future Dons players.

“That was the most fun I’ve ever had coaching, because there is so much learning going on,” said the coach, who played basketball in his youth, but began to play volleyball himself as an adult.

When he coached the 2019 Amador Valley boys volleyball team to the NCS championship, there were seven whom he coached at middle school. Some now are in college ranks: Colton Brooks plays at Loyola-Chicago. And Kim is at Vassar after his brief senior season.

Luke McFall, Kost and Will Sadler are back for one last potential go-round.

By 2019 that core of middle school players helped Amador Valley become the No. 2 seed in the NCS Division I playoffs, leading to an eventual title clash with No. 1 Monte Vista-Danville, which had beaten the Dons twice in regular-season matches. 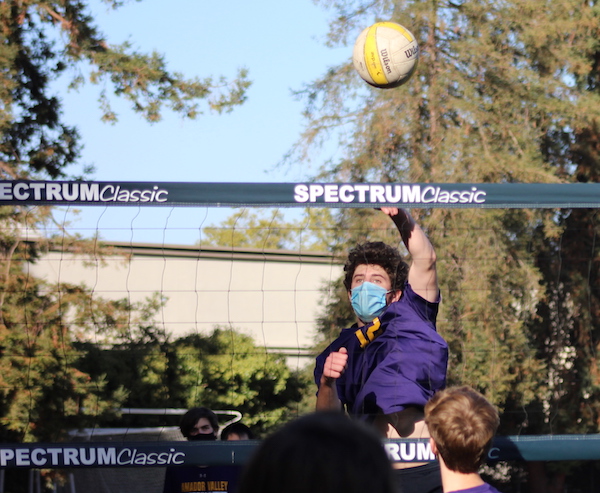 Ethan Gray is a 6-1 junior who should be a factor at the net along with Luke McFall and Will Sadler.

“We had a solid all-around team that kept improving, but to a lot of people it was a surprise that we beat Monte Vista for the championship since we had lost to them twice,” Erin McFall said. “They had a really strong team, very well-coached. We had prepared for that match for several weeks.

“We were down seven points in the first game, and we called a timeout and settled down,” he said. “And from there, we won three straight games to win the championship.”

It was a win that made the Dons believe in themselves.

“It was crazy, because we went into NCS thinking we were going to lose. Not that we wanted to lose,” Luke McFall said. “It was one of those matchups where nine times out of 10 that one team wins, but we got lucky to win that one out of 10. The first 20 or so points went as expected and then we turned it around.”

Though the Dons’ run ended in a NorCal sweep by No. 1 seed Monta Vista-Cupertino, it was evident special things were in store for spring 2020.

“Personally, I felt we had a better team than the 2019 team; everyone was a year older,” Kost said. “It was a big bummer we couldn’t finish it.”

But talent rings true, even without action on the court. Luke McFall was selected in June for the USA Volleyball Boys Youth National Training Team, though any activity has been on hold due to COVID-19.

He said everything clicked at age 15. That’s when he received an invitation to the USA High Performance program in Tulsa, Oklahoma. 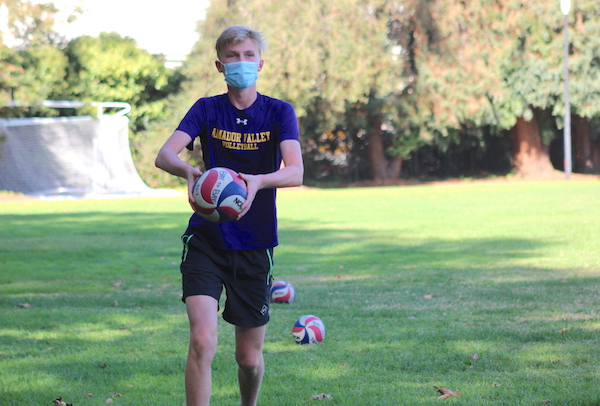 Devon Kost prepares to serve during the team’s outdoor workout.

“When I went to High Performance I was raw and underdeveloped,” McFall said. “The experience started shaping me. I had a light-bulb moment where all these things came together for me.”

As a longtime teammate, Kost is struck by the effort McFall puts forth.

“It’s about how hard Luke works,” Kost said. “I’ve seen and heard about how hard he works off the court and on it, and how he tries to be the best one there.”

Kost will be putting in hard work himself. He’s hoping to play both volleyball and water polo, an endeavor that became much easier once volleyball moved back to the spring.

“I’d like to do it, because in both sports we have a real good chance of winning NCS or being one of the top teams,” Kost said.

For now, team-bonding things like Friday team dinners are on hold. But workouts hopefully will lead to full practices. Currently, they meet once a week outdoors at a city park to work through drills while fully masked. 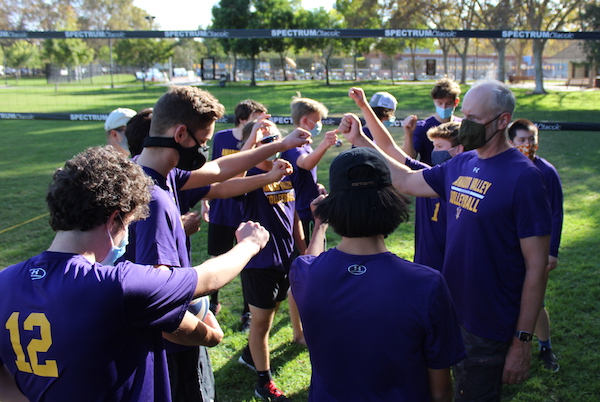 Masks and non-contact huddles will be the norm in a 2021 season, but the Dons will be ready.

“Right now we are getting them together in a high school experience, so they can have fun together and get some touches,” Erin McFall said.

For coaches like McFall, it’s about being hopeful in uncertain times.

“I’m planning on it because I am hopeful, preparing myself by scheduling matches outside of the abbreviated EBAL season. I have no idea what rules will allow in (terms of) playing teams in different counties or allowing fans in,” he said. “So we plan on playing in a good environment and we are hopeful that the world allows it.

“My only job is to prepare for the season and be ready for it when and if it happens.”