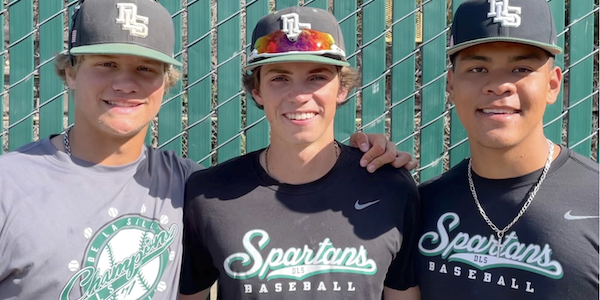 All Together Now | De La Salle Baseball Ready For Playoffs

With the postseason looming, De La Salle-Concord baseball coach David Jeans likes what he’s got in his dugout.

Jeans and the Spartans wrapped up the regular season with a 3-0 defeat at the hands of host California-San Ramon on May 6, a predictably tight contest given that De La Salle entered as the No. 3 team in the latest SportStars NorCal rankings and the Grizzlies came in at No. 5.

But, despite the temporary setback, putting the final game of the regular season out of their collective consciousness shouldn’t be a worry for Jeans and the Spartans.

That’s what comes with the experience of a roster that includes 27 seniors.

Thanks to a 7-6 win over San Ramon Valley-Danville two days earlier, De La Salle had already secured the top seed in the East Bay Athletic League playoffs in which they’ll host the same San Ramon Valley team for a semifinal today at 4 p.m.. The Wolves and Spartans split their regular season meetings. California and Foothill-Pleasanton match up in the other semifinal with the winners meeting for the championship on Friday.

Where the growth has really come has little to do with wins and losses. Jeans cites the group’s interactions with each other, along with a great attitude in the classroom, as reasons that the 12-time North Coast Section champion has put itself in position for yet another run at postseason glory.

UC Irvine-bound catcher Anthony Martinez has led the Spartans both on and off the field, but in addition to his duties behind the plate, he’s compiled a sterling .391 batting average with seven home runs and 30 RBI. Fellow upperclassman Cade Cushing has also established himself as a leader, and he ranks second to Martinez in both categories with four home runs and 26 RBI.

Right-hander Cal Randall helps lead the Spartans on the mound, and the junior UCLA commit was again strong against Cal with 10 strikeouts in five innings of work. He has plenty of help in the pitching department, but Jeans said the contributions of seniors Sam Sitzman and Tyler Wood have been key, with both owning an ERA under 2.00 and each logging double digits in appearances.

Senior Donovan Chriss, who doubles as De La Salle’s shortstop, has been a stalwart at the back end of the bullpen with five saves in six appearances.

After the EBAL playoffs wrap this Friday, the Spartans will jump back into a North Coast Section Division I bracket they have won six of the last eight times it has been contested. The last NCS baseball playoffs came in 2019 with the 2020 and 2021 editions cancelled due to the COVID-19 pandemic.

Pairings for the 16-team NCS playoff bracket will be announced Sunday, May 15.