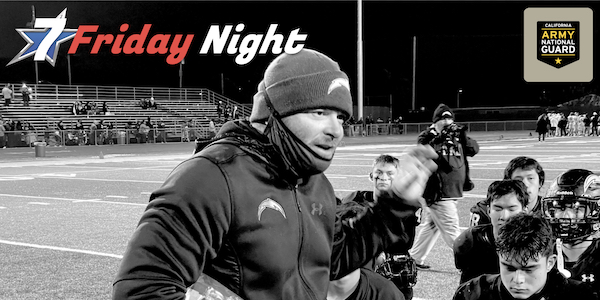 This week on 7 Friday Night, hosts Chace Bryson and Ben Enos revisit a wild week of playoff action featuring several upsets (we see you, Turlock!) before turning to the coming week of semifinals across several sections.

For some of that semifinal preview talk, the hosts welcome Wilcox-Santa Clara coach Paul Rosa to the show. The Chargers are the top seed in the Central Coast Section Div. II bracket and host Bellarmine-San Jose this week as they attempt to defend their section title. Rosa talks with the guys about this year’s team and how it compares to last year’s 2-A NorCal Champions. He also offers his thoughts on the CCS playoff system as well as this week’s matchup with the Bells.

There IS one championship game this week, and it’s kind of a big one. NorCal No. 3 De La Salle-Concord and No. 4 Pittsburg will meet in the North Coast Section Open Div. final. Coach Terry Eidson offers a breakdown on that matchup in his weekly visit, and also recalls some of his favorite upset wins with the Spartans (though they were very rarely underdogs).