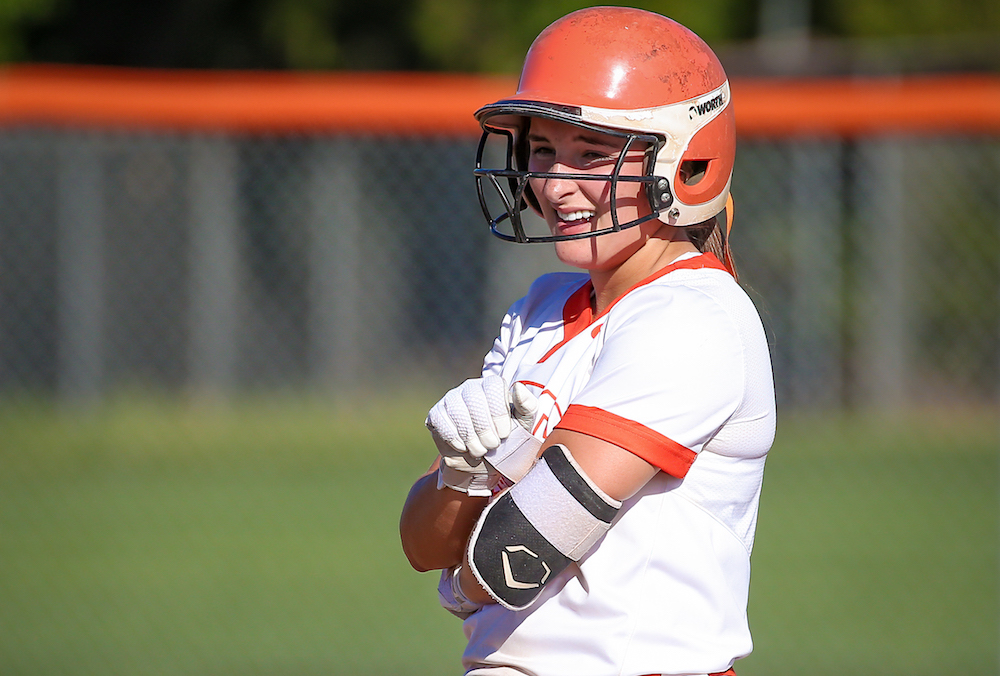 After An Impressive Start To 2020, The Roseville Softball Team Copes With A Season Stuck In Limbo •

One day after beating cross-town Woodcreek High, 9-2, to improve to 5-0 in the early stages of the 2020 season, the Roseville softball team got word that it likely just played its last game.

The email came from the Roseville Joint Unified High School District to all students. It stated that due to the concerns caused by the coronavirus COVID-19 health crisis, school and all after-school activities were cancelled until April 13.

Standout catcher Lauren Mirtoni scanned the email that evening and quickly picked up her phone to check her team’s group chat. It was full of panic, disbelief and tearful emojis.

Online lectures and exams have taken the place of in-person classes throughout Roseville’s high schools. All games and after-school activities are postponed. Nothing is officially cancelled yet. Many believe the first week of April might be when players and coaches hope to find out about the district’s next steps towards mitigation efforts to limit students’ and teachers’ risk of the virus.

“I’ve heard that if we were to go back to school, we might resume play and just play teams once instead of twice (to finish the regular season)” Mirtoni speculated.

Before students received that season-postponing email, teams were already issuing their own quarantine measures.

Roseville softball coach Art Banks had to cancel his team’s game against Cosumnes Oaks due to the Elk Grove School District’s early lockdown on school activities. They were one of the first area school districts to implement a shutdown.

Travel was restricted to in-section games only, which denied Roseville a March 14 trip to the Bay Area’s Queen of the Mountain Tournament. The season was postponed not long after.

“On Friday, after we found out about this all, our seniors were crying and saying how much it sucks that was their last game. They had no idea,” Mirtoni added, referencing the Woodcreek game.

On March 19, the Sac-Joaquin Section announced the postponement of all meetings and gatherings for at least six weeks. The section’s offices are closed until at least April 6. They’ll soon determine if more postponements or cancellations are necessary. So far, playoffs have not been ruled out.

“I’ve seen (the rules) change a whole bunch within the last few weeks in terms of what we can do and what we can’t,” Banks said following his team’s game against Woodcreek. “When you look at the college programs, which are stopping all of their spring sports, it’s no surprise it could happen to us. We’re well aware of that. We’re hoping if nothing else, we can still have a season without spectators, which is hard.”

A full Roseville softball dugout watches the action during the team’s home win over Woodcreek on March 11.

Mirtoni and her Roseville softball teammates are still grappling with the fact that they may have played their last game of the season.

“It was definitely a cool experience being on a team that’s this good,” Mirtoni said. “It’s been a great experience so far. But I’m super sad that it had to be cut short. We were off to such a great start, so it just sucks to not be able to finish it off and see where we could go.”

“We have multiple ways to win,” Banks said.

Banks says this year’s team has more speed than any in recent memory.

“We’ve got six or seven girls who can flat fly,” he said.

They also have a terrific pitcher-catcher combination thanks to an offseason switch.

After playing third base last year, Mirtoni stepped into big shoes. She moved behind the plate to replace four-year starting catcher Sadie Langlet. Banks trusts Mirtoni to make all the calls, put the defense in the correct spots and work closely with the team’s young pitchers.

“I know she’d prefer third base, but we had a need behind the plate. She’s taken that on and done a good job,” Banks said.

In 16 at-bats, Mirtoni has seven hits, seven RBIs, three doubles and a pair of home runs, which is good for a .438 batting average — second on the team behind sophomore Shaylen McDowell (.444). Mirtoni also calls the pitches for standout sophomore Malaya Johnson, who started all five of Roseville’s games on the rubber.

“Malaya came in here as a freshman and thought she could overpower people, and she did,” Banks said. “But there’s always bigger fish out there. So she’s learned to change speeds more and use her change up really well. Her ball moves really well now, and she’s averaging 10 strikeouts per game.”

Through five games this season, she had 52 strikeouts.

Pitcher Malaya Johnson is another key sophomore for the Tigers. She won 13 games as a freshman in 2019.

“Personally, I set out to have a good ERA this year and really grow as a pitcher. But as a team our goal is to win league,” Johnson said after the Woodcreek win. “We came really close last year, so that’s our main goal.”

With the season up in the air, members of the team have had to focus on classwork while trying to stay physically fit.

Mirtoni said it’s been an easy transition to the online classroom. She’s been motivated to complete her assignments and get her work done as quickly as possible in the morning.

But Mirtoni is a good student. She earned a 4.1 GPA last term while taking a pair of AP classes. Other students may not be as dedicated, or have parents pushing them to complete classwork, or may not have an adequate place at home to study or complete homework. And classes might not resume in-person sessions this year.

“I don’t think (school) will resume,” Mirtoni confessed. “The Governor of California has said that we have to prepare to not go back to school. Our AP testing is already online. I don’t know about the SAT. I was scheduled to take the test in May, but that doesn’t look like it will happen.”

Like many juniors her age, Mirtoni continues to study for the college prep test via her online resource. She planned to take Roseville High’s after-school SAT prep class. It was cancelled.

Mirtoni watches the path of one of her hits against Woodcreek on March 11.

She is also worried about her travel softball team’s hopes of a season this summer. Those are still up in the air, too.

“This is the summer I’m trying to get recruited,” she admitted. “What if we can’t play? It would be devastating.”

Right now, she and her teammates can only wait.