Being part of the Monte Vista High girls soccer team is comparable to playing on an all-star team. The Mustangs are full of skilled scholarship athletes up and down their roster.

Talent again abounds on this year’s squad as they seek the ultimate goal of a North Coast Section Division I title, with the Mustangs having won the section’s top prize seven times. At the Danville school, the caliber of skills are never in question, but getting all that talent to coalesce into a selfless team is the task at hand.

“The easiest way to say it is that they have gotten over themselves,” said Chris Lum, who coaches Monte Vista along with Karen Huether. “When you get them in a room, there is so much talent there. They have so many accolades, but they don’t bring them up, because it’s not important to them. What is important to them is the experience and arriving at it together.” 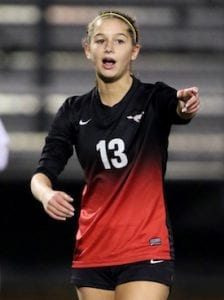 Part of that is casting collegiate aspirations and plans aside. Considering the roster is peppered with highly recruited athletes who play at the elite level in the Mustang Soccer club, that takes some concerted effort. That endeavor appears to be taking hold, with focus on this season at hand.

“The three months of high school season, as soon as it starts, everyone forgets about the club mindset and going to college and trying to get scholarships, being recruited, all that,” Mustangs senior Sarah Arnaudon said. “And so it comes down to each game, and we’re focused on that game, and that game only. And for playing for a team and not playing for ourselves.”

Arnaudon shares the distinction of being a four-year varsity Mustangs player with Sydney Shepherd. The two are Monte Vista’s captains this season, aiming to impart their wisdom and experience to the Mustangs’ younger players. They know about high expectations and being in the spotlight. Shepherd is headed to Michigan while Arnaudon has committed to UC Santa Barbara.

As freshmen, they played on the 2014-15 Monte Vista team that spent much of that season ranked No. 1 in the nation. That team won every match that year, all the way up until the last match of the season, the NCS Division I championship game, when No. 3 seed Liberty-Brentwood handed the Mustangs a stunning 2-1 defeat.

“It was interesting especially being a freshman and coming on the team, and the previous year they hadn’t lost any games,” Shepherd said. “I think both of us felt this responsibility not to let anyone else down, especially as freshmen. The seniors, we wanted the best for them. Losing that last game, was like, man, we got so far but we got so close.”

To watch this team, communication skills are as evident as the players’ aptitude at footwork, passing and relentless attacking.

“The seniors last year will always be very good, but I think this year we’re going to be even more solid than last year,” said sophomore Megan Edelman, who is already committed to UCLA. “Because we have all-around really amazing players, hopefully we’ll be able to get to NCS and win the championship.” 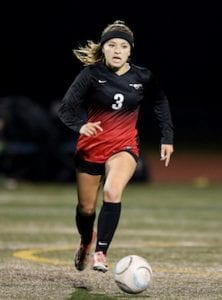 Edelman is feeling at ease, with a freshman year of experience to draw from. That was evident in this season’s opener, when she scored both of the Mustangs’ goals in a 2-0 win over Las Lomas-Walnut Creek.

“Being a sophomore on the team (this year), I wasn’t as nervous as last year, because being a freshman on the team is not the easiest,” she said.

The Mustangs finished 14-4-4 a year ago. Once again, Liberty won the NCS Div. 1 title, shortly after again ending Monte Vista’s season with a 6-1 win in the semifinals. That result rang back to the upset loss two years ago.

The championship chase begins anew. The Mustangs embark with a leaner roster, at 18 players. That’s fostered the team bond, the captains said.

“This is probably one of our most inclusive years as being part of Monte Vista varsity team,” Shepherd said. “All of us are good friends. A part of it is that there are only 18 of us this year. Our freshmen year it was like 24-25.”

Added Arnaudon: “Chris made it a point to have it at 18 this year, to have it a family, inclusive environment for all of us.” 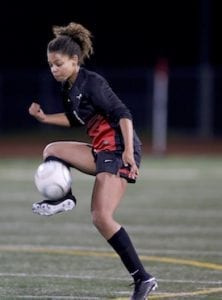 Offensively, the Mustangs bring considerable offensive firepower, including Lily Arbabaraghi (13 goals last season) and Edelman (11 goals, seven assists). With Hannah Deljkic and Rachel Anderson and the return of Julia Leontini, the Mustangs have plenty of offensive punch. In their win over Las Lomas, the Mustangs were relentless in staying on the attack on the Knights’ side of the field as they are finding the best blend for all their talent.

“Almost everyone plays for the same club so we’re kind of used to the same sort of style, but the thing we are trying to get used to is how each individual player plays,” Arnaudon said. “Once you learn everyone’s greatest assets, then you can focus on how to use that to become a better team.”

On defense, the Mustangs boast an impressive back line, where Shepherd is the anchor, Lum said. With contributors like Erika Braun, Claire Pappas and the goalkeeping duo of Jules Girdner and Emma Rodgers, Monte Vista should be tough to score upon.

That all will be tested right away. After shutout wins over Las Lomas, Acalanes-Lafayette and Berkeley, the Mustangs opened EBAL play on Dec. 14 against Carondelet-Concord, which lost 3-2 to Liberty in last season’s NCS Division I title. The next day, it’s a rematch with Liberty. After league games with Dougherty Valley-San Ramon and California-San Ramon, there’s the talent-rich Tri-Valley Classic Dec. 21-23. And Monte Vista jumps right back into the fire after a holiday break with a Jan. 9 EBAL match against rival San Ramon Valley-Danville.

“The season is so compressed, so we are trying our best to focus on what’s immediately at hand,” Lum said. “There’s no ceiling for these kids. They are always trying to work harder and trying to piece together different ways to be dangerous.”