De La Salle78 MP504 NorCal Top 2012 Ticker613
Our Preseason Rollout Of The NorCal Top 20 Football Rankings Won’t Surprise At The Top, But Offers Plenty To Debate As You Move Down...

Our Preseason Rollout Of The NorCal Top 20 Football Rankings Won’t Surprise At The Top, But Offers Plenty To Debate As You Move Down The List •

Here it is, our full 2018 Preseason NorCal Top 20 Football Rankings.


On offense, expect a lot of RB Shamar Garrett (5-8, 170), who will provide a 1-2 backfield punch with To’oto’o. TE/DE Isaiah Foskey (6-5, 240) is another nationally recruited, two-way talent. The Spartans are replacing a few graduates on the offensive line, and will be starting a sophomore QB (Dorian Hale) who did see some live action last season. DLS won’t be allowed to stumble out of the gate this season as its season opener against No. 2 Folsom will put the program’s 291-game winning streak against NorCal opponents in real jeopardy. 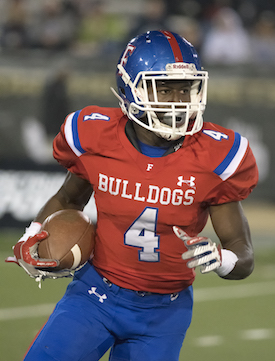 Junior RB Daniyel Ngata is one of several weapons at No. 2 Folsom’s disposal this season. (James K. Leash photo)

2. Folsom (16-0)
The Bulldogs won their third CIF State Bowl Championship (Div. 1-AA) last year and return a wealth of starters on both sides of the ball. The Bulldogs are only slight underdogs to De La Salle-Concord in the season opener, and will be heavy favorites moving forward. That’s what they do best, actually: Move. Forward. What’s easily the most talented and experienced offense in the state includes the 2017 SportStars Offensive Player of the Year, WR Joe Ngata (6-3, 210 — over 1,700 rec. yards and 26 TDs), QB Kaiden Bennett (6-0, 170 — 73 combined pass and rushing TDs) and WR/DB Daniyel Ngata (5-9, 190 — 11 rushing TDs). Win over De La Salle in season-opener would all but pave way to CIF Open Div. berth. 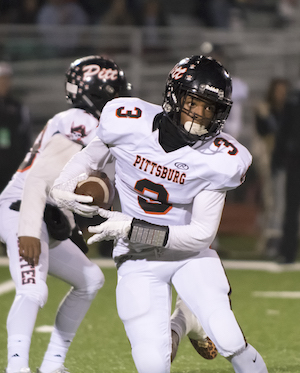 No. 3 Pittsburg’s Willie Harts III is one of the East Bay’s most versatile two-way players. (James K. Leash photo)

3. Pittsburg (9-3)
The team that rolled to a runner-up finish in Div. 1-A returns 14 starters (seven on both sides) and could thrive after a gauntlet preseason that includes No. 15 Clayton Valley Charter-Concord, No. 11 St. Mary’s-Stockton, SoCal-power Centennial-Corona, No. 7 Serra-San Mateo and Vacaville. QB Trey Turner (6-1,180) is expected to return from a 2017 preseason ACL tear and allow versatile WR/DB Justin Boyd (5-10, 163) to catch passes after throwing for nearly 2,000 yards and 26 scores as Turner’s replacement. Defense drives this team, though, led by four-star DT Jacob Bandes (6-2, 275)

4. Liberty-Brentwood (11-2)
Preseason No. 4 for all of NorCal isn’t bad for a program that began 2017 having never won a section title. The Lions won’t be able to sneak up on anyone in 2018 — but with their talent and experience, they shouldn’t have to. Junior QB Jay Butterfield (a Top 100 national recruit for 2020 class) has a gluttony of weapons to utilize, and the defense will be physical. The defense features several returning starters, including leading tackler Nicky Einess at middle LB.

5. St. Francis-Mountain View (11-4)
They aren’t the only defending CIF State Bowl champ in their league, but they are the one with the most returning talent. Senior RB Darrell Page, a 2,300-yard rusher as a junior, leads the offense while four-star DE Joshua Pakola anchors a defense which also features returning LB Opeti Fangupo and three-star defensive backs Evan Williams and Maurice Wilmer. Williams and Wilmer will also be key receiver targets on offense.

6. Jesuit-Carmichael (10-3)
The Marauders squeezed a 10-game winning streak and Delta League title between a pair of losses to state champ Folsom. Returning stars like RB/CB Isaiah Rutherford (6-2, 170), OLB/TE Laiatu Latu (6-5, 242) and LB Cade Brownholtz (6-3, 228) will set tone. The progression of second-year QB Hank Harvego. If the Maurados can add the threat of an air attack to the ground attack of Rutherford and Jackson Canaan, look out! 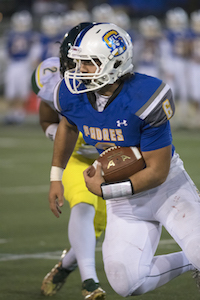 7. Serra-San Mateo (13-2)
Graduation gutted Serra’s receiving corps, but third-year quarterback Luke Bottari (5-11, 177) will keep the defending WCAL and CIF 2-AA champs competitive. LB/RB Edmund Lahlouh (6-0, 205) and RB/DB David Coker (5-9, 170) will also factor. The Padres face a few more question marks than they did to start the 2017 season, but there’s too much talent to expect any kind of big drop-off.

8. Del Oro-Loomis (8-6)
Expect things to go much smoother for the Golden Eagles during the second year of the Jeff Walters coaching tenure. Returnees like QB Carson Jarratt (6-3, 198) and RB/DB Dawson Hurst (6-0, 195) will help that cause. Jarratt will get his top two receiving targets back in Matt Smart and Johnny Guzman. The duo combined to catch 66 passes for just shy of 1,200 yards and 10 TD. 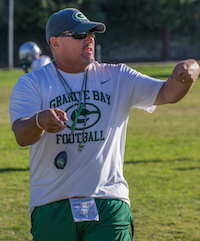 9. Central Catholic-Modesto (10-2)
The Raiders are still smarting from a postseason defeat to Del Oro, and have embraced a gauntlet schedule that includes Clovis West-Fresno, No. 1 De La Salle and No. 11 St. Mary’s-Stockton. Watch for RB/DB Dawaiian McNeely (6-1, 206) to make an impact. First order of business Central Catholic will be filling the shoes of graduated 1,800-yard rusher Dauson Booker (25 TD in 2017).

11. Saint Mary’s-Stockton (11-3)
The Rams have earned a place among the perennial Sac-Joaquin Section Div. I contenders and 2018 should be no different. Junior QB Noah May is ready to pick up where he left off after injuring his shoulder following a 3 TD performance against eventual state-champion Serra-San Mateo in Week 1. With protection from senior lineman Hunter Jones (6-3, 265) and as many as five returning receivers, the passing attack will be key for Tri-City Athletic League and the SJS title runs. 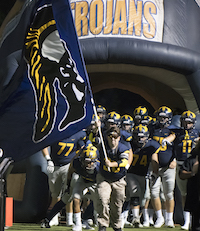 No. 13 Oak Ridge is replacing several key faces from 2017, but have the potential to reload quickly. (James K. Leash photo)

12. Inderkum-Sacramento (11-1)
Despite losing star wideout Isaah Crocker to graduation (Oregon), the Tigers (pictured at top) return 35 players and appear poised for a big splash in the newly realigned Capital Valley Conference. Junior RB Aaron Espero (6-0, 180) will get a bulk of the carries in the Tigers’ offense along with seniors Johnny Williams and Isaiah Ward. The team also returns its pair of starting quarterbacks from last year. Ward (9 sacks) and senior Logan Benoit (109 tackles) will anchor the defense.

13. Oak Ridge (11-2)
Valuable late-season reps for QB Matt Jenner and RB Nathan Addleman give this young team a head start. The pair got their first starts in the playoffs, and showed well. Coach Eric Cavaliere’s most experienced unit is the offensive line where senior OT and Nevada-commit Zac Welch will lead the way with 6-foot-6, 295-pound junior Nick Scalise as the other big bookend. Oak Ridge’s stout defense returns just three players with significant playing time, but two of those are DBs Sawyer Merrill and Avant Jacobs. 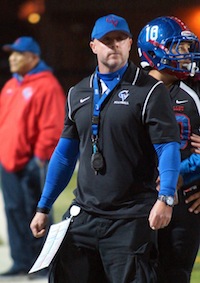 14. Antelope (10-2)
The program with one Capital Valley Conference loss over the course of three years has new competition in 2018. The addition of Inderkum-Sacramento, Woodcreek-Roseville and River Valley-Yuba City pose new threats to the Titans, but Matt Ray’s new group could climb back on top this year. Returners Nathan Lucero (QB, 5-11, 180) and Mhari Roberts (RB, 5-7, 165) should have big years in the CVC, and look for senior TE/DE Carter Sullivan to break out after amassing 56 tackles and five sacks last year.

15. Clayton Valley-Concord (8-3)
What was an extremely young group in 2017 comes back with plenty of talent and experience. The defense begins slightly ahead of the offense thanks to top returners LB Cade Carter (90 tackles, 2 INT), LB/DE Dusty Mitchell (12.5 sacks), DE Kitione Tau (8.5 sacks) and FS Parker Allen (82 tackles, 3 INT). Returning playmaker on offense include RB Thomas Alatini, RB Makhi Gervais and WR/RB Antoine Jerone White Jr..The three of them combined for 32 TD in 2017 and should help the new faces at QB and OL.

17. Oakdale (12-2)
Oakdale doesn’t belong here on paper, having graduated 18 of 22 starters, but the Mustangs have size, speed and the luxury of playing in the most established medium school system in the section, playing in the toughest medium school conference in the state. Expect sophomore running back Zeke Safar to earn varsity accolades in his first full season. Oakdale finished No. 11 in our 2017 Final NorCal Top 20 Football Rankings. 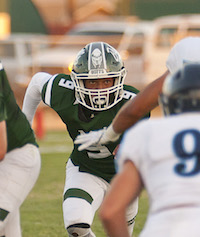 Manteca’s Trabron Russell rushed for more than 800 yards and 16 TD as a sophomore in 2017. (Jim Johnson photo)

18. Valley Christian-San Jose (9-3)
Despite losing nearly all of their statistical leaders from a season ago, there’s still plenty of talent to go around for this Warriors team. Look for RB Isaiah Mcelvane and TE/DE Skylar Loving-Black to help out whoever takes over at QB. The defense looks strong with DBs Deven Vanderbilt and D’von Lang along with LBs Judaea Moon and Blake Newquist.

19. Manteca (12-3)
The Mark Barnum era begins with a shot at three straight section titles, but the departure of head coach Eric Reis and All-NorCal quarterback Gino Campiotti will change for the program that finished No. 10 in 2017’s Final NorCal Top 20. Luckily, Manteca has some big returning talent, like returning leading rusher Trabron Russell (16 TD in 2017) and receivers/defensive backs Jorge Cedano and Jacob DeJesus. Star pitcher Ryan Ward (6-2, 161) is the new arm behind center.

20. San Ramon Valley-Danville (9-2)
There’s plenty of questions on offense, but there’s a lot to like on the defensive side of the ball — beginning with seven returning starters. Leading that group is recent Stanford-commit LB/S Tristan Sinclair. The offense replaces its entire passing game, but should get backfield help from senior tailback Jason Javier who averaged 7.2 yards/carry and scored six TDs as a junior. SRV closed 2017 at No. 15 in our final football rankings. 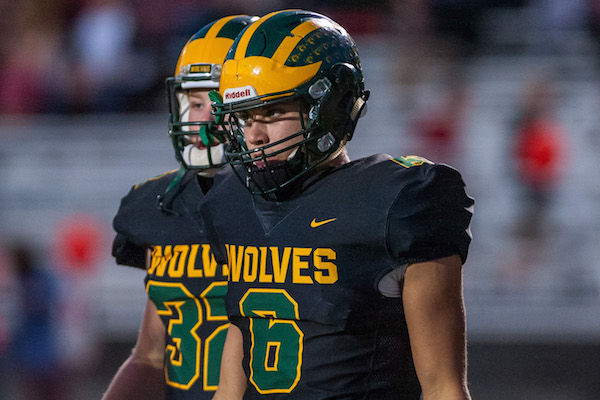