Saturday’s CIF Division I Northern Regional Championship girls soccer match in Davis ended in confusing, chaotic fashion. So much so that many hometown fans left blaming officials for one call.

After tying the game late in regulation and sending it to overtime, sixth-seeded Monte Vista was awarded a free kick in Davis territory near midfield. The call ultimately decided what was a close game for 90 minutes. The Mustangs scored on the play, sealing the 2-1 win. But that free kick also left fans, players and coaches stunned.

The sharp whistle came a few seconds after the injury. Possession had switched at least once between the teams following the collision between midfielders. Video footage shows Davis’ Vicky Li kick the ball away from a Mustangs player, and time was called before either team could regain possession, although Edelman was the one chasing the ball down (see video below). After Shaffer’s trip to the sideline and a brief injury delay, the referees awarded the free kick to Monte Vista — causing confusion and panic on the Davis sideline, as they thought they were in clear possession of the ball.

According to sources after the match, a few of the Mustang players said they agreed to kick the ball back to Davis in a move of good sportsmanship. Monte Vista’s coach acknowledged that fact after the game as well.

“I know there are no dropped balls in high school soccer,” Monte Vista co-coach Chris Lum explained. “So in a situation like that, (earlier) when our player went down, the free kick went (to them), because there are no dropped balls. Well, alright, that’s the way it goes. So my sense is that’s why he set it up the other way, because it actually happened (earlier). I thought we were going to knock it back. But it was obviously nothing intentional.” 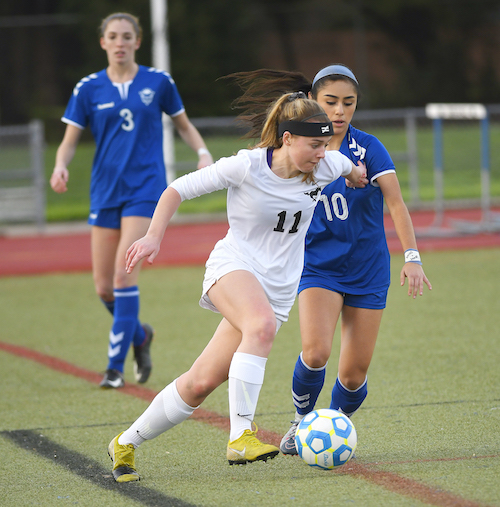 Instead of returning possession to Davis, Monte Vista’s Becca McCourt took the free kick and sent the ball soaring high in the air, towards the goal.

Edelman was one of a handful of players that made a move. A Davis defender followed her, but she was out of position. Edelman deflected the free kick a few feet in front of the net and tapped it into the goal without hesitation — a momentarily crowd-deafening golden goal that lifted the Mustangs to victory.

“Usually, I’m pretty good about timing it up really well, but I was accidentally early,” Edelman said. “…I thought I was going to be off-sides, but luckily the player followed me and I just happened to be there at the right time. It came right to me and I was able to finish, which was sweet.”

Before the kick though, many of the Mustangs felt mixed emotions, including Edelman.

“The ref said, ‘You guys had possession of the ball, so you can either pass it back to them or you can have the free kick,’” Edelman recalled.

“I wasn’t quite sure whether to give it back to them to be a good sport about it … but I know my team really wanted it and I felt like we had to go for it and take the free kick from them,” she added.

McCourt took the free kick, placed it on goal and Edelman scored the final goal of the season – her fourth this postseason for the UCLA-commit, and number 16 on the year. 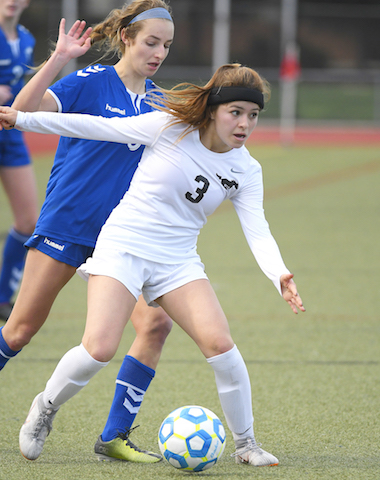 Megan Edelman’s championship-winning goal was her fourth goal this postseason and her 16th on the season.

Edelman has been on a tear recently as she began the regional playoffs with a pair of scores against Archbishop Mitty-San Jose to help her team secure an early-round upset. The junior added another goal in a 2-1 win against Carondelet. On Saturday, she added the final touches for her team’s second-straight NorCal title.

“I’m really close to all of the seniors, and I’ve played with them a long time. … So a lot of these girls are my best friends,” Edelman admitted. “It was really sad that this was my last game with them, and I’m still a junior, so they’re not going to be with me next year. But it felt amazing, and I’m glad we did it for them.”

Teammates immediately surrounded Edelman in celebration once the ball hit the net. Davis’ players were stunned. Coaches stormed the field in search of a response for the free kick decision.

“Emotionally, yeah, it kills the game, right?” Davis’ coach Sara Stone stated. “There are only so many things you can control. We controlled the way we played; we dominated the game. And then the ref, which you can’t control, pretty much put us in that situation. So I disagree with the call, and obviously if we had possession near midfield, their goal would not have happened.” 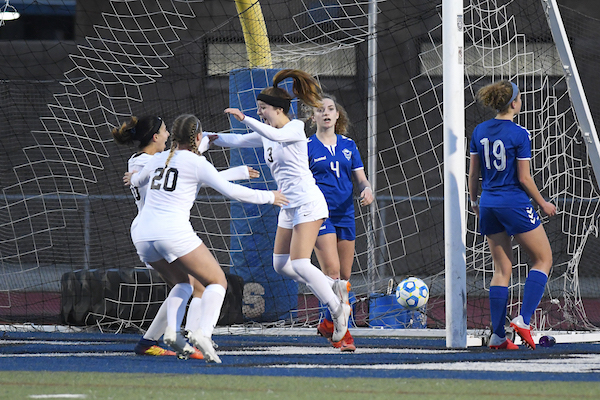 Almost immediately after the referees left the field, Stone went to CIF officials to challenge the call. She was denied and told there’s nothing else she can do. The game was over and the result stood.

“It was an awkward ending,” Lum confessed. “You just never know when things are going to happen, and there’s always weird stuff that happens. But I thought they were an outstanding team. I thought that was one of the best team’s we’ve ever seen. And they were missing their best player. And without her, they were still really good.”

Monte Vista’s coach was referring to Davis senior Maya Doms, who was in Spain competing in the 14 Nations Tournament with the Under-19 USA Women’s National Team. She missed both the regional semifinal and championship games.

However, one of Monte Vista’s best weapons didn’t see much action Saturday either.

Stanford-commit and Mustangs’ leading scorer, Julia Leontini, played injured during the final. She played on the back line and exc

“We had some difficulty in the midfield (because of that),” Lum explained. “We tried to piece it together, but we’ve had a lot of injuries.”

Partly due to the missing pieces, both teams struggled to mount attacks in a scoreless first half. But it didn’t take long for Davis to find the net in the second half as it scored less than ten minutes in.

Like a knife slicing through butter, Davis forward Paige Rubinstein split two defenders on her way to the net. She took one touch on the ball and was able to deflect it as she collided with the Mustangs’ goalkeeper, but not before she could inflict damage. 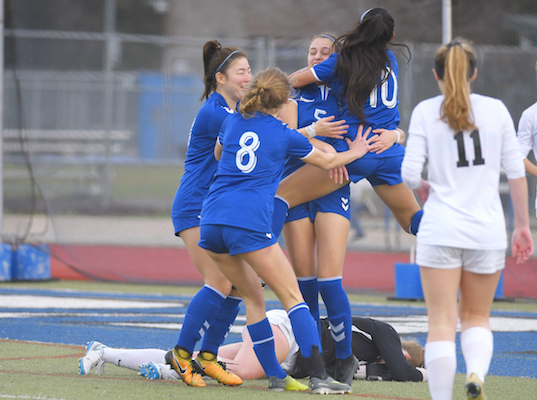 Several teammates swarm Davis senior Paige Rubinstein after her goal gave Davis a 1-0 lead early in the second half.

“The defender was shielding, but I knew I was faster and I could get (to the pass),” Rubinstein stated. “… we all had the desire to win this game, and that was part of my goal. I had the desire to get there and finish it.”

Now down by a score and sensing the urgency, Monte Vista went on the attack.

All game long, the Mustangs struggled to control the ball and sustain attacks without Leontini. But, as it turns out, they didn’t need it. Instead, it was a quick counterattack that helped them turn the tides as Emiley Benner found the net in the 71st minute after a long ball got through the Davis defense.

“Our goal is to win as many turnovers in the attacking third as we can, because it’s a short road from there,” Lum explained.

Despite numerous opportunities for both sides, the teams were dead even until the end of regulation. Again in overtime, Davis and Monte Vista saw few chances to claim victory prior to the golden goal free kick.

“I thought for a stretch – long stretches – Davis was better, but it’s a weird game,” Lum admitted.

“You want to do things the right way as much as you can,” Lum said, in reference to the penalty. “And certainly, we wanted the ball back, but I expected us to knock it back.” 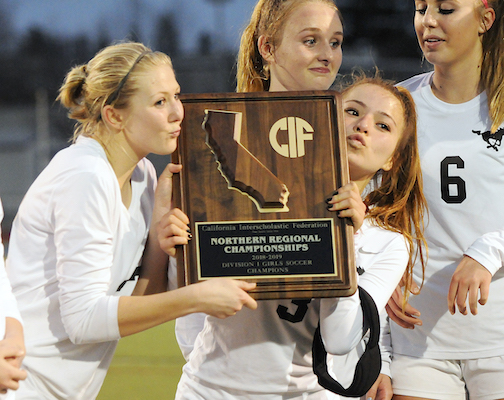 Whether it was miscommunication between coaches and players, or simply a confusing rule that ultimately favored Monte Vista, that one decision changed the course of what was a neck-and-neck contest for 90 minutes.

Both teams had felt the roller-coaster emotions of the game. Many were overcome by tears when the final whistle blew.

For Monte Vista, those were tears of joy as the Mustangs capture their second title in as many years.