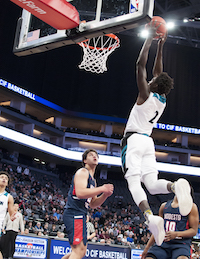 Junior Xavion Brown rises for a dunk during the Sac-Joaquin Section championship at the Golden 1 Center on Feb. 22. (James K. Leash photos)

Sheldon has earned its standing as a Northern California boys’ basketball powerhouse — perhaps the best public school program in the region over the last 20 years — and made a name for itself with the help of some standout players.

But the Huskies’ strength has always been depth and buy-in to a true team concept.

“We have 10-12 guys that we can play,” Sheldon head coach Joey Rollings said of his much-used bench. “In the first half, I try to find out which five I can rely on. In the third quarter, we put those five out there and maybe mix in one or two more, and in the fourth we just go with our five strongest guys.”

The Huskies’ lineup du jour concept was never more evident than in the Sac-Joaquin Division I championship comeback victory over Modesto Christian. Junior Darren Tobias, who did not see action this season until the regular season stretch run, scored all nine of his points in the decisive fourth quarter that saw Sheldon outscore Modesto Christian 25-13. The strong finish led to a comeback win that gave the Huskies their first section title since 2013.

“I just tried to stay composed and do whatever I can to help the team in any way that I can,” Tobias said in the postgame glow. “I tried to not get down on myself and tried to have a short memory. Just do what I can when I can.”

What he did was score on an impressive drive to the rim while drawing a foul and converted a three-point play to break a 59-59 tie in the final minute. Seniors Justin Nguyen and Kaito Williams led Sheldon with 13 points each as 10 different Huskies scored and 11 players logged minutes.

Nguyen and Williams are mainstays who have been in the program for four years. They finally got their first SJS championship to savor after witnessing heartbreaking losses in the section finals each of the last two years. 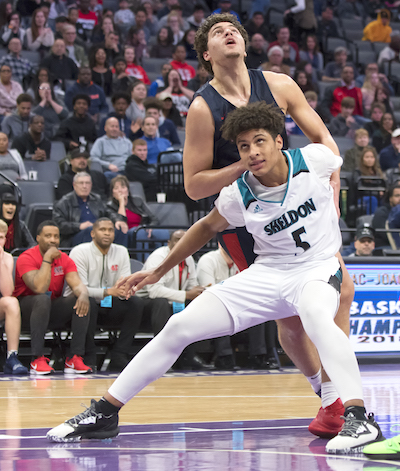 Darren Tobias works on blocking out a member of Modesto Christian during the SJS final.

Living through the heartache of tough losses, including game-winning free throws by Woodcreek with 0.9 seconds left in 2017 and a 35-foot rainbow by Modesto Christian in the final 20 seconds last year, provided the senior leaders with a shared sigh of relief to go with the accomplishment.

“I almost started crying when we won,” Williams said. “I looked at Justin, knowing that we are the senior leaders, and we ran immediately to each other. That relief was a weight off of our shoulders.”

But the relief was short-lived, even during the celebratory press conference in the confines of the Golden 1 Center in Sacramento. Sheldon understood plenty of work is left for the team with potentially three games left to play.

“It’s going to be tough,” Rollings said of being the defending NorCal Open champions and having a challenging road ahead to get back to a state final. “You’ve got teams from Fresno, teams from the Bay, and Salesian’s No. 1 and has not lost a game this year and are very tough. We’re going to hang in there.”

Hanging in there throughout the SJS playoffs has been something of an accomplishment for Sheldon, but not necessarily a surprise.

The Huskies lost 6-foot-11 center Josh Morgan in early January to a dislocated kneecap. They were also without the services of standout Marcus Bagley in the section playoffs, yet still managed to claim the section crown and earn a first-round bye in the NorCal Open Div. playoffs. 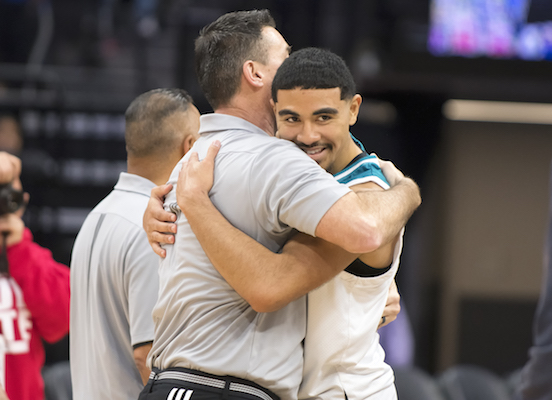 The duo of Bagley and Morgan averaged a combined 30 points and 16 rebounds per game, but Sheldon’s depth counteracted the absence of those statistics with the Huskies’ tried and true team concept.

Of course, the CIF Playoffs are a huge step up from the section postseason. The Huskies host De La Salle-Concord for a NorCal Open Division semifinal on Saturday. All eyes will be on the Sheldon bench to see if Bagley is in shorts, or pants.

“He’s day-to-day with his back,” Rollings said of his junior forward, who is the younger brother of Sacramento Kings’ rookie Marvin Bagley III. “We are just hopeful that maybe we can get by where he is OK to play in the last two games, or just in the NorCal finals if we can get that far.”

Bagley averaged a team-high 20.7 points and 8.3 rebounds during the season. However, he was held to just 11 points on 3 of 11 shooting when Sheldon lost to Salesian-Richmond back in December. Salesian went on to post a 31-0 record and entered the NorCal Open bracket as the No. 1 seed and top-ranked team in the state. 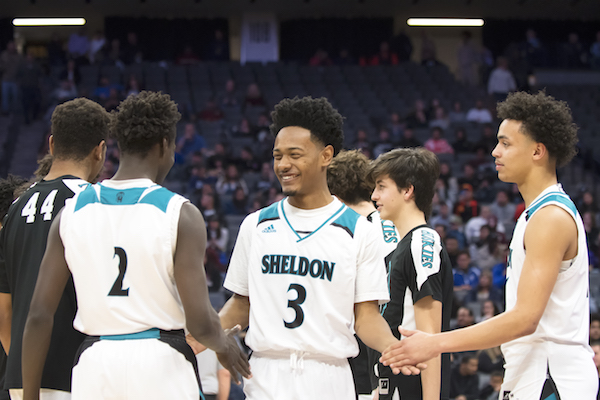 Junior Xavier Brown is all smiles as he greets teammates during pregame introductions.

Bagley’s presence on the floor would certainly provide a boost for Sheldon, but Rollings and the Huskies know they have plenty of options if he’s unavailable.

“We have a lot of guys that we can work in,” Rollings said of potential lineups as the stakes get bigger and bigger. “You might get 22 minutes one night and just five the next. It just depends on how it’s going that game and what the matchups are.”

With the matchups getting tougher, Bagley’s back will be a big factor, but not one that will determine the fate of NorCal’s best hope for public schools. Sheldon nearly toppled Sierra Canyon-Chatsworth, a transfer magnet that features the offspring of former NBA stars Scottie Pippen and Kenyon Martin among others, in the CIF Open Division State Championship last year. A David vs. Goliath rematch between the two is still possible.