We’ve been covering this young racer since his early teens growing up – and racing – in the East Bay Area. Talent not withstanding, who would have predicted his ability then would place the young racer on one of the worlds biggest stages now – and at the top!

Corresponding fairly regularly with Jaden’s father Craig, he tells SportStars that his son is currently in Europe commuting between the UK and Italy preparing for his next race at Misano World Circuit Marco Simoncelli (which took place this past weekend of May 19th.) 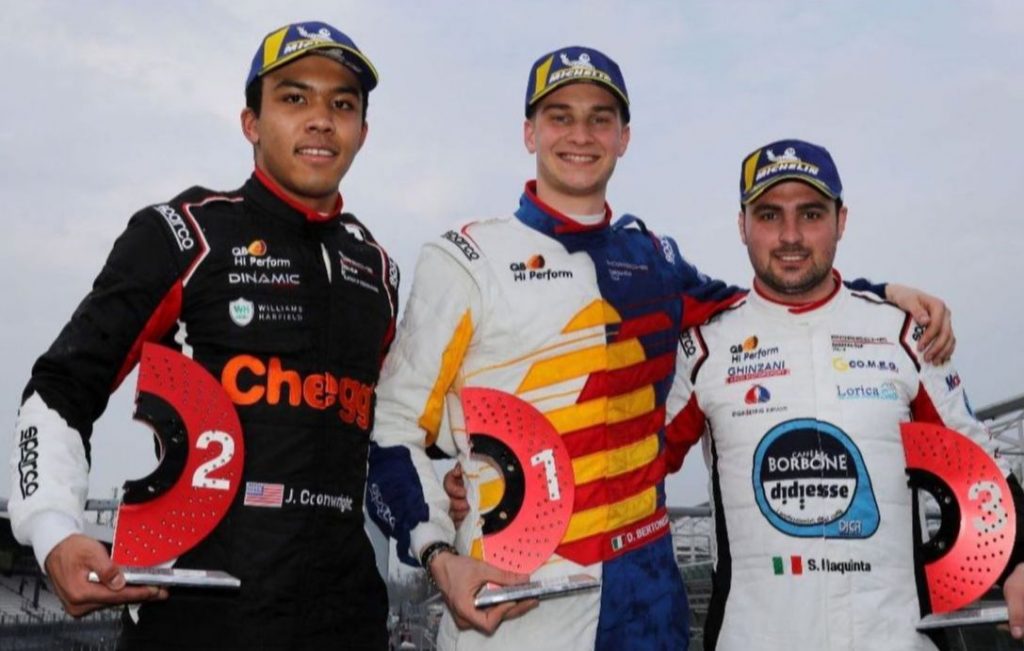 “If you did not have an opportunity to watch Jaden’s April 7th race at Monza, said Craig Conwright, presented below are a 3 minute clip of Jaden’s race at Monza Circuit April 7th, and the official press release of Jaden’s impressive sports car debut in the Porsche Carrera Cup Italia at Monza.”

The 3 minute clip is pretty wild. If you know anything about motor racing, you’ll catch the technique and bravado of the final lap pass that put Conwright on the podium and a mistake that almost left him out.

Editors note, get ready for a lesson in Italian… you’ll catch the announcer saying “Conwright” a few times, Conwright Se Attacka, and the “Californiano”, you get the point! Conwright’s in the #48 green car.

A short highlights video from Race 2 during the first weekend of Carrera Cup Italia in Monza.

Jaden Conwright belied his lack of prior experience in the Porsche Carrera Cup Italia to tally a brace of podium finishes and fastest lap on a head-turning debut at Monza. The fast-rising American motor racing star set out his stall as a championship contender from day one.

Following a race-winning campaign in the inaugural F3 Asian Championship certified by FIA in 2018, Conwright traded single-seaters for sportscars this season. He then headed to legendary Italian Grand Prix venue Monza. With limited pre-season testing under his belt, he brought a steely determination to make his mark.

Familiar with the circuit from his stint in Italian F4 three years ago, the talented Californian teenager was immediately on the front-running pace in the fiercely-disputed single-make series behind the wheel of his 485bhp Porsche 911 GT3 Cup race car.

Leading from the start 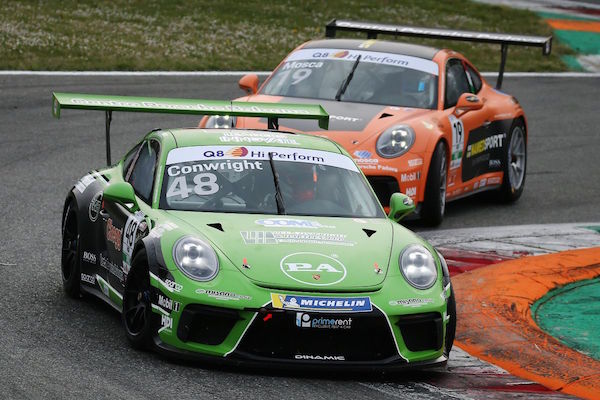 Missing out on pole position by barely 0.03s around an almost two-minute lap, he lined up second on the grid amongst the 23 high-calibre protagonists – impressively leading the six-strong Dinamic Motorsport charge in his first-ever qualifying session in GT machinery.

Despite conceding a position at lights-out in race one, Conwright quickly recovered it as he made light work of pole-sitter and former champion Enrico Fulgenzi. After which he maintained the pressure on race-leading teammate Diego Bertonelli throughout as the pair pulled clear of the chasing pack. 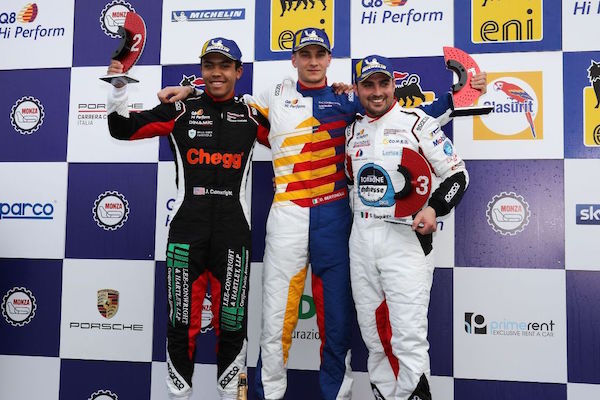 Race two was similarly intense – a spectacular, on-the-limit, no-holds-barred scrap with no quarter asked and absolutely none given.

From fifth on the partially-reversed grid, the Fremont, SF Bay Area-born ace was the architect of a particularly feisty opening lap. It producing several bold moves to advance to third. As the leading trio increasingly broke clear – the three cars rarely blanketed by much more than half-a-second – Conwright went on the attack, pulling off a superb round-the-outside pass on GP3 Series points-scorer Patrick Kujala going into the last lap.

Near Win Out of the Gate

A small error saw the 19-year-old Williams-Harfield Sports Group protégé slip back behind Kujala several corners later, but he regained second place when the winner was subsequently disqualified for failing post-race scrutineering, ultimately coming within a scant 0.133s of victory on his maiden weekend in the series.

He will travel to the next round at Misano on 17-19 May sitting a close second in the title standings and well-placed indeed amongst the Porsche Italia Scholarship Program candidates.

“Going into the weekend, we were unsure what to expect in terms of race pace,” reflected the former World Speed Motorsports Rising Star / VMB Scholarship Award-winner and Carlin Academy member. “We knew we had good single-lap speed from pre-season testing, but testing and racing are two very different things. My expectations were definitely high. Coming off a successful official test at Imola, the level of competition in the championship is as strong as it’s ever been. I knew that any slight mis-step would heavily hinder our results.

“Thankfully, I have an amazing team behind me. The engineers, mechanics and drivers at Dinamic Motorsport work together very well and things run very smoothly and efficiently. Free practice proved that we had a quick car underneath us. To then lap just three hundredths-of-a-second shy of pole on my GT racing debut was very satisfying. And while that inevitably ramped up the pressure for the races, at the same time, being on the front row provided an open track, which allowed me to learn and adapt to the car more easily during the first one.

“With some driving adjustments – and the experience gained in race one – I modified my approach for race two. That allowed me the ablity to fight for the win against seasoned GT drivers. We came up a bit short due to a mistake of my own, but setting fastest lap shows we’re not far away from being on the top of the podium.

“My goal for the weekend was to match my teammate Diego [Bertonelli]. He is one of the championship favorites and a great reference point, and while I am obviously delighted to come away with two second-place finishes – bringing home silverware is always a pleasure – there’s definitely room for improvement.

“Misano will be a much more difficult and technical circuit in comparison to Monza.  I’ll need to be even more focussed and consistent going into that weekend. The other teams and drivers will also clearly be aiming high, but we’re going to leave absolutely nothing on the table in our preparation. I take a lot of confidence from that.”