Dede Salcedo Quickly Becoming One of The Top Warriors

McFarland’s Dede Salcedo is now a freshman at Stanislaus State

For someone with a vocal cord dysfunction, Dede Salcedo is pretty talkative.

She likes talking about running, of course. And her new life at Stanislaus State, about her hometown, and Kevin Costner. Her upbeat personality has been the talk of her peers and her positivity has been praised by her coach.

However, Devianna (her given name) is humble. She won’t brag about the multiple championship medals she owns and hundreds of newspaper and magazine clippings her parents stashed in boxes back home in McFarland, Calif.

In fact, vocal cord dysfunction has little to do with the ability to talk.

Despite having a condition which could make breathing difficult, this true freshman on the women’s cross country team, runs at least 50 miles a week in training.

“She is becoming one of our top athletes, really quickly. Having a lot of natural talent gives you a steep improvement curve,” said Darren Holman, Stan State’s cross country head coach. “Her improvement curve is so steep that she has exponentially improved every single week as she gets into better shape. She’s improving so much, I really don’t know how fast she’s going to run this year.”

Salcedo is one of the top two runners on the current team with a number of Stan State stars redshirting the season. Including that group, Salcedo is probably the fifth or sixth fastest runner, according to Holman. For now.

In just her second race as a collegian, Salcedo finished third behind two Warrior redshirts, at the Kim Duyst Invitational on Sept. 14. The week before that, she was second in a shorter three-mile run, behind teammate Nancy Juarez. She missed the meet in Sacramento to attend her sister’s wedding.

So, where did her running talents come from? Maybe it’s in the water of McFarland, a small farming town 25 miles north of Bakersfield. The town was made famous by the Disney movie “McFarland, USA,” based on the story of the high school’s first state championship in cross country.

Maybe she was born with it.

The middle of three daughters to Frances and Samuel, who work in the oil industry, Dede played soccer before deciding to run with her older sister Jasmine.

“My mom used to say ‘you’re just running up and down the fields and not touching the ball, go run with your sister’,” Dede said.

It’s a good thing she did.

Ever since she traded in soccer cleats for running shoes, Dede dominated the sport as a youth. Aside from winning just about every race in the area as a kid, she was the amateur cross country national champion at age 10. Dede also won multiple regional championships, and at age 12 she won the USATF National Junior Olympic Cross Country championship, by 14 seconds.

In high school, she led the McFarland Cougars to sectional championships and was the CIF Central Section’s Runner of the Year as a sophomore in 2016.

Then, “that thing” in her throat became an issue.

“(The doctors) didn’t know what it was at first. They thought it was asthma, and I knew I didn’t have asthma. They said it was mental. (The newspapers) said I was injury prone. There was a lot of pressure,” she remembered. 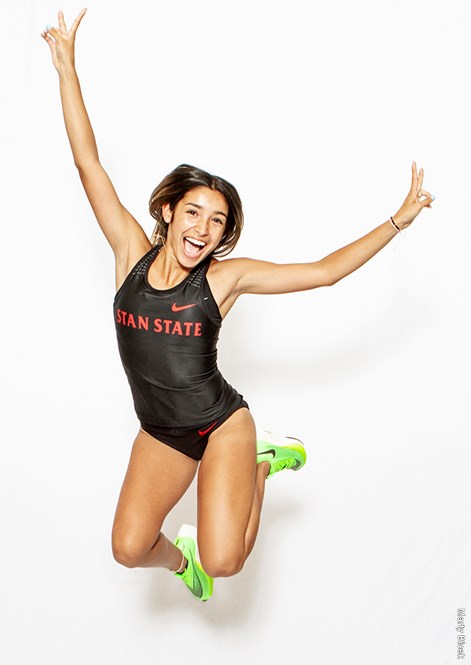 After numerous doctors’ visits and trips to Los Angeles to see specialists, Salcedo found out that her vocal cord muscles tighten when she’s running, making breathing difficult. Without actual treatments available for vocal cord dysfunction, she just learned to control her breathing. Now, Holman works with her every day with conditioning and fitness.

“There had been times when I almost passed out during races, or cramped up due to lack of oxygen. But I’ve learned to control it and I am still learning (breathing techniques),” said Salcedo.

With the vocal cord challenge, coupled with the fact that CIF forced McFarland to compete in Division I, Salcedo fell off the recruiting radar a little. Still, she was highly sought after and received many scholarship offers by colleges across the country.

She chose Stanislaus State because of coach Holman, who continued to show interest and vowed to help train her to reach her ultimate goal of competing for a spot on the Olympic team. Plus, Turlock, with all of its traffic lights, is “not too far away from home.”

“(McFarland) finally has a stop light, a Rite-Aid and a Taco Bell,” said Dede, who thinks the notoriety from the movie helped with the rapid growth and upgrades of the town.

“Dede is the fastest runner to come out of McFarland,” Holman stated. “She was one of the fastest high school freshmen girls in the country. She was running a sub-five mile as a freshman!”

Yes, she’s the fastest runner from McFarland even with all of those state champions ahead of her. This includes the 1987 boys team, featured in the motion picture, that won the school’s first of nine state titles.

The rich history of distance running in McFarland and the stories told in the movie served as inspirations for kids growing up in the little town off Highway 99.

“I’ve watched the movie 50 plus times. That’s all we did when the movie came out,” said Salcedo. I was invited to walk the red carpet during the movie premiere in Bakersfield, where she met Kevin Costner. “Everyone in town probably owns a copy.”

Many of the runners featured in the film are still helping shape these young McFarlanders’ lives. Johnny Sameniego was Dede’s middle school PE teacher. Danny Diaz was her high school counselor and Thomas Valles was one of her coaches.

Jim White, the legendary coach portrayed by Costner, still rides his bicycle alongside runners during practices in the orange groves and around the same dirt track.

Holman, who actually runs with his team during training, believes Salcedo will be adding to her trophy case with more national championships.

“The absolute desire to win races is something you are either born with or you are not. And she has that desire. She’s out there trying to win every race,” Holman explains. “When you combine the desire with talent, which she has shown with her pedigree, the odds of her becoming a really, really successful athlete are in her favor.”

Maybe there will a movie about Dede Salcedo someday. Maybe there won’t. But this bright Warrior full of charisma will once again be the talk of McFarland, USA, soon.

EDITOR’S NOTE: We’d heard about Dede as a middle schooler but finally saw her run at the Nike Portland XC Meet when she came up with her team from McFarland. Dede won the Girls Mile in championship style and earned the right to be on the cover of Youth Runner Magazine. This article is a repost from warriorathletics.com