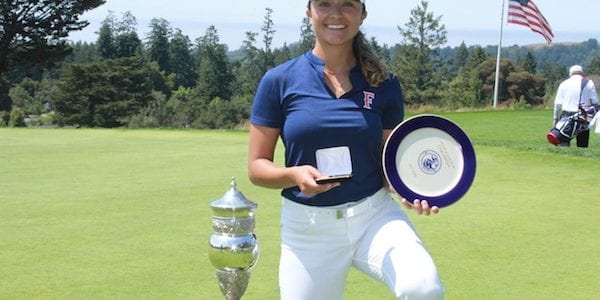 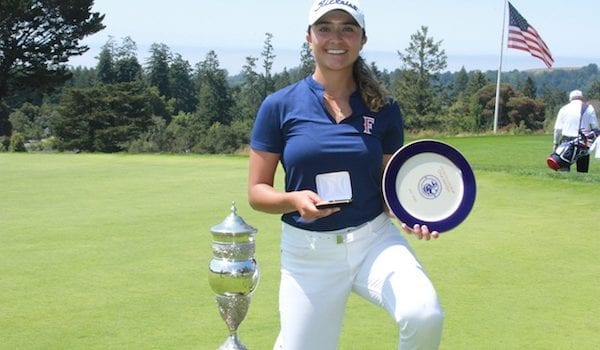 Mexico City native Sara Camarena made a splash in her Golden State debut. A clutch par at the 18th bagged the CSU Fullerton Jr. the win in the 54th California Women’s Amateur Golf Championship.

Camarena (feature photo), a 20-year-old junior at Cal State University-Fullerton, made a clutch par on the tough par-3 18th hole Friday at Pasatiempo Golf Course to hold off Katherine Zhu, 1-up, and win the 54th California Women’s Amateur Championship. 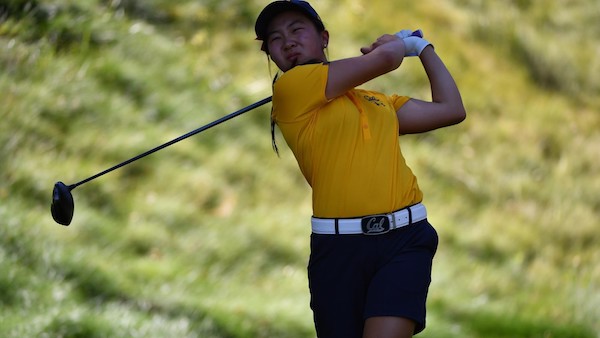 Camarena, who becomes the first foreign-born player to win the prestigious event, was making her debut competing as an adult in a non-collegiate event in California. She transferred to CSU-Fullerton this past Spring after playing at Oklahoma State. Due to the COVID-19 pandemic, she’d only played one event as a TItan.


“I’ve only really played in California as a junior,” said the No.18-seeded Camarena, who joins the likes of Patty Sheehan and Juli Inkster as winners of the event. “I’m happy, but I don’t think that it’s really sunk in yet.”

Holding a 2-up lead through 16 holes, it looked like Camarena could cruise to the win. On the par-4 17th, however, she pulled her approach shot left and out of bounds, leading to an eventual triple-bogey and loss. On the ensuing 18th, with the flagstick tucked front right and the hole playing at 145 yards, the No.9 seeded Katherine Zhu hit a great shot that landed about 9 feet above the pin. Camarena hit an even better shot, her ball landing just 3 feet to the right of the flagstick. Zhu missed her birdie try, and the two eded up tying with pars.

“On the tee on 18 I knew I was still 1-up. She (Zhu) hit a nice shot. I just wanted to be on the safe side,” said Camarena, who hit a choked-up 8-iron off the tee. “I wanted to hit a draw but my ball actually just went straight. It worked out.” 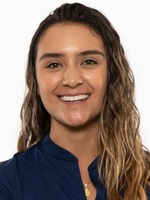 Camarena started out strong, making birdies on holes 1 and 2 to jump to a quick 2-up lead. Zhu, a junior at Cal-Berkeley, later won holes 7 and 8 with pars to tie the match.

On the back-nine, Zhu’s putter became uncooperative. While Camarena’s kept hitting. Having lost the 11th hole after making a bogey, on No.12, Zhu missed a 3-footer for a potential tie. The two would tie the next four holes before heading to the 17th. Whenever it looked like Zhu had a chance to win a hole, Camarena either came up with a fantastic up-and-down or clutch putt to earn a tie.

“I had a slow start, and the putts just didn’t drop,” said Zhu, a former member of the Junior Tour of Northern California. “Once I started to pick things up, she started making these great up-and-downs. Everything was working for me early in the week. Today, it slowed down. I’m still satisfied with how I played.”

While Camarena had never seen Pasatiempo prior to the week, she became a quick study and fan of the Alister MacKenzie layout.

“I learned where to hit and where to miss it,” Camarena said. “A big thing for me all week I think was my focus. I would try to relax in between shots. It’s hard to focus the whole time.”

Since 1901, it has been the NCGA’s mission to support and promote the game of golf in Northern California. The NCGA Foundation’s Youth on Course program, which allows juniors to play more than 350 courses throughout the Western United States for no more than $5, now stretches nationwide and into Canada. The NCGA also provides official handicap indexes, conducts more than 50 championships annually, rates courses throughout Northern California and publishes NCGA Golf magazine. is the only golf association in the country to own two courses – Poppy Hills in Pebble Beach and Poppy Ridge in Livermore.

About the Pacific Women’s Golf Association

Founded by Helen Lengfeld in 1947, PWGA is a community of women amateur golfers in Northern California that is working to bring recognition of the value of its members and to enhance their golfing experience. PWGA supports women amateur golfers on the public courses in Northern California. In addition to supporting several benevolent projects, we provide educational, competitive, and social opportunities for our members.

About the Women’s Golf Association of Northern California

Founded in 1907, WGANC provides educational, competitive and social opportunities to support and promote women’s amateur golf.  Its vision is to realize the potential of women’s amateur golf in Northern California, through programs that enhance their golfing experience, from junior through championship opportunities. WGANC also promotes and supports Junior Girls’ Programs in an effort to help grow the game.