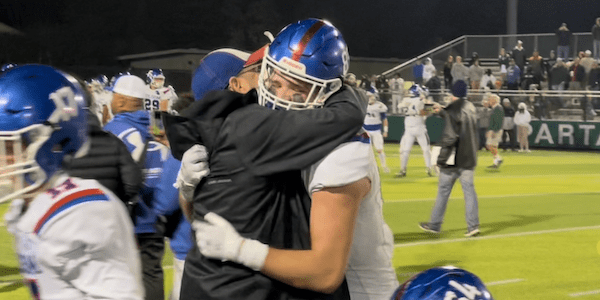 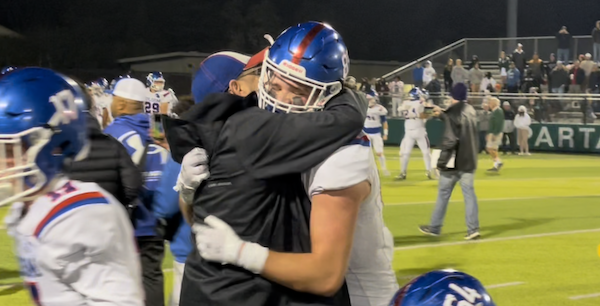 Tyler Tremain Accounts For Four TDs As Bulldogs Come From Behind To Take Down NorCal No. 1 And Advance To A Fifth State Bowl Championship Appearance •

As Folsom High quarterback Tyler Tremain slowly walked away from exuberant family members, it was momentarily unclear what had made him more weary: Four quarters of football against De La Salle-Concord, or the endless string of interviews that followed.

He was being summoned by yet another reporter. And while it had been a good 20 to 25 minutes since the game clock had struck zeroes on a historic 28-27 Folsom win, Tremain was still struggling to describe his feelings.

Folsom (11-3) shook off a 14-0 first-quarter deficit and turned away a De La Salle 2-point conversion attempt with 1:44 left to outlast NorCal’s most recently anointed No. 1-ranked team in the CIF Division 1-AA Northern Regional playoff. The win was significant for much more than simply advancing the Bulldogs into the 1-AA State Bowl Championship against Cathedral Catholic-San Diego next Friday night at Saddleback College in Mission Viejo.

Even more noteworthy, however, the Bulldogs became the first Sac-Joaquin Section team to defeat the NorCal juggernaut since a 25-0 Benicia win on September 26, 1978. Bob Ladouceur took over the program the following year and proceeded to win 399 games over 32 seasons. Benicia joined the North Coast Section in 2018.

“This is unbelievable,” Folsom senior wide receiver Justin Arnaz said as he tried equally hard to put his feelings into words. “Everything we’ve been waiting for and dreaming of as kids. De La Salle. The history. This is just what we needed.”

After the first seven minutes of football on Friday night, what Folsom needed was to regroup. Quickly.

After the Bulldogs failed to take advantage of a Greco Carrillo fumble recovery on De La Salle’s third play of the game, the Spartans blitzed Folsom for 14 points in a two-minute span.

With 4:32 left in the first quarter, Folsom trailed 14-0 and a hush had fallen over an impressive contingent of Bulldog fans who’d made the trip.

“Our team has faced so much adversity this year,” Tremain said. “We weren’t going down without a fight.”

Tremain connected for a 46-yard pass down the right sideline to star junior receiver Rico Flores Jr. on the second play of the ensuing drive and Folsom’s flame was ignited. Four plays later, Tremain found Austin McMillan for a 12-yard touchdown pass that cut De La Salle’s lead in half.

The Spartans’ first half would only grow worse from that point. De La Salle’s last four possessions of the half would end with a turnover on downs, an interception, a lost fumble and another interception — in the end zone, by Flores Jr., on the final play before the intermission. The home team was also whistled for 10 first-half penalties (and finished with 13 overall).

Tremain tied the game at 14 on a 9-yard run with 5:15 left in the half and the Bulldogs wouldn’t trail again the rest of the night.

“We knew bad plays were going to come and that adversity was going to come,” Folsom defensive lineman Hunter Masterson said. “But you just have to keep putting one foot in front of the other. … We stick together as a team. We don’t fall apart. We bend but we don’t break.”

De La Salle closes the half with its 4th turnover of the night — an interception in the end zone by Rico Flores Jr.@lil_reek_ @FolsomBulldogFB pic.twitter.com/8QblvdfUMj — SportStars™ Magazine (@SportStarsMag) December 4, 2021

De La Salle opened the second half with the ball, but committed its 11th penalty of the night on its first play. Folsom’s defense made the Spartans pay by forcing a 3-and-out, and a short punt and Folsom-friendly bounce set up the Bulldogs at the De La Salle 39. Five plays later Tremain was in the end zone on a 15-yard run.

The 21-14 lead lasted into the fourth quarter until De La Salle’s defense tied the game on a 62-yard fumble return by Ronald Pierce with 8:45 left to play. Once again, Folsom didn’t panic.

“If I learned anything from the coaches who were here before me, they talked about how mature teams win championships,” Folsom coach Paul Doherty said. “This group right here is incredibly mature, and focused and competitive. They earned it. They really earned it.”

Tyler Tremain scores on his second TD run of the night – a 15yd run that gives ⁦@FolsomBulldogFB⁩ its first lead of the night.

Tremain led a 12-play, 80-yard drive that chewed six and a half minutes off the clock. He capped it with his third scoring run of the night, a 3-yard run with 2:12 remaining. The senior quarterback finished with 245 yards passing and 32 rushing yards, meaning he had a hand in 277 of Folsom’s 336 yards of total offense in the win.

“Tyler, he played his butt off,” said Arnaz, who tied Flores Jr. for a game-high seven catches. “He put the team on his back. He knows everything. He doesn’t panic. He’s exactly what we needed today.”

“I’ve known him for damn near my whole life. He’s just amazing. He keeps this team together on and off the field. Number 7, man. Can’t say enough about him.”

But it would take one last play from Masteron and the Folsom defense to seal the win.

De La Salle quarterback Luke Dermon opened the Spartans’ final drive with a 28-yard pass to AJ Bianchina. After a defensive holding penalty pushed De La Salle across midfield, Dermon hit Berry for a 42-yard touchdown pass with 1:44 to play. The Spartans then called timeout and returned to the field and lined up for a 2-point conversion attempt.

“I never even thought about kicking. It’s just not who we are,” De La Salle coach Justin Alumbauhg said. “They were moving the ball effectively on us, and there was still almost two minutes left. I was thinking ‘Let’s take the lead right here. Let’s take the wind out of their sails.’ Right when they scored, I told the guys, ‘We’re going to go down (the field). We’re going to score. And we’re going to go for two.’”

The Spartans handed it to their best player, Berry, on a jet sweep to the right. He was contained on the outside and tried to cut inside at the 2-yard line but was met by at least four Bulldogs defenders and wound up a half-yard short.

De La Salle was unable to recover the onside kick, and with only one timeout could not keep Folsom from running out the clock to seal the win. It’s the first time De La Salle will not play in a CIF Bowl Championship since the games began in 2006.

As a water-drenched and hoarse Doherty watched his kids celebrate at midfield and take pictures with family, the coach summed it up pretty succinctly.

“The kids never flinched,” he said. “They showed up and they made a play when they needed to.”

And for that, they get one more game and a shot at the program’s fifth state bowl title. Tremain’s string of interviews will last just a bit longer it seems.