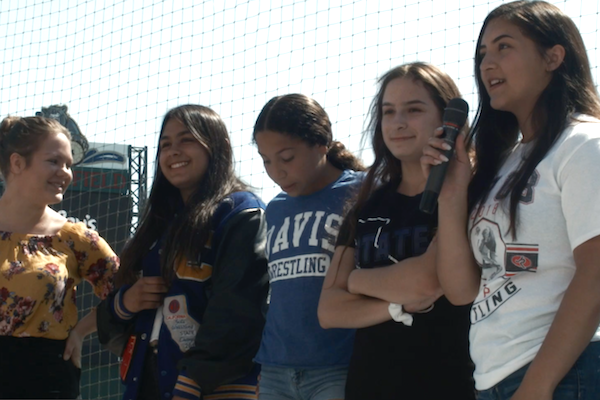 Double figures! SportStars and the River Cats reached that milestone on May 12 when they worked together to honor more than 600 athletes from the Greater Sacramento region to the outer reaches of the Sac-Joaquin Section. Now it’s time for an All-City Team recap.

The Mother’s Day morning event at Raley Field was a success once again. That was due in large part to a number of participating sponsors. Our biggest sponsor was the California Army National Guard. Also helping to make it such a great event were the U.S. Air Force, FitPro Go sports recovery drink, WeNeedMerch.com, Strapemup Sports and the Northern California Volleyball Association.

A line of 2019 All-City Softball honorees stands atop the third base dugout during the May 12 ceremony at Raley Field.

As part of the ceremony, the River Cats presented their male and female athlete of the year honors. Monterey Trail-Elk Grove three-sports star Zach Larrier was the winner of the Art Savage Award. Davis High girls soccer phenom — and member of the U-17 Women’s national team — Maya Doms, won the V Award.

Finally, Strapemup Sports began an All-City tradition by presenting Oak Ridge-El Dorado Hills football player, Zac Welch, the Marvel A. Smith Lineman Of The Year Award. Welch was also given the honor of throwing out the ceremonial first pitch prior to the River Cats game. His first pitch and the presentation of the award can be viewed in our video version of the All-City Team recap.

SportStars looks forward to beginning a whole new decade of All-City Honors in 2020.

For our Bay Area fans, our 6th Annual Bay Area 75 athlete rankings will be revealed in July.