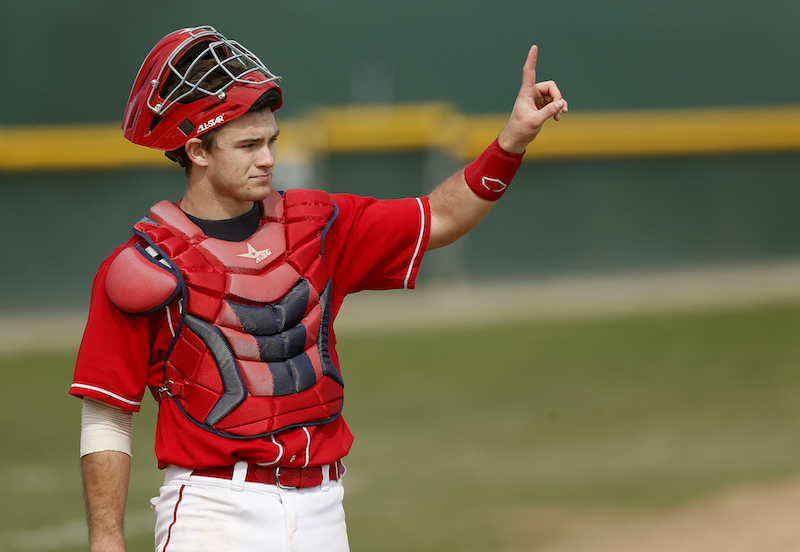 In his 19 years as the head baseball coach at Buchanan High in Clovis, Tom Donald has become familiar with perfection.

His team last season came about as close to a perfect season as one can get. The Bears’ only loss in a 30-1 campaign was to a league rival they beat three other times. And after they topped that opponent, Clovis North-Fresno, 4-0, to win the CIF Central Section Division I title, they were named the Cal-Hi Sports State Team of the Year and were No. 1 in final national rankings by USA Today and MaxPreps.

Of course, Donald also knows about perfection as in pitching a perfect game.

In 2010, his son Jason (another former player of his at Buchanan) was the one ruled to have beaten out an infield hit for the Cleveland Indians that spoiled a perfect game for Armando Galarraga of the Detroit Tigers. Prior to Jason Donald’s hit, Galarraga had set down 26 batters in a row.

Both Galarraga and Jim Joyce, the umpire who incorrectly called Jason Donald safe, were praised for their sportsmanship for weeks after that game. Buchanan’s program under Tom Donald has similar traits.

Although last year’s Bears were a more universal No. 1 in the nation selection, the path had been set previously in 2011. Just like in 2016, the 2011 Bears were going for a second straight CIF Central Section Division I title and they had to face a dangerous opponent in the final. In that case, Buchanan played a state No. 12-ranked Centennial-Bakersfield squad that had scored 22 runs in its previous playoff game.

It was Centennial that had the early jitters in that game, however, as two errors helped open the door for a five-run inning. Buchanan went on to post a 9-3 win, capped a 30-2 season and clinched the final No. 1 state ranking. The Bears’ national crown came courtesy of the ESPN Rise FAB 50, a poll that no longer exists.

“It just all came together at the end,” Donald recalled of that season. “That team pushed us over the top as far as recognition from the state and even the nation. Teams that have come along afterward have passed the torch from one to the other. It’s about doing your best to keep each team near the top.”

The obvious difference is the one extra loss, but the Bears also were No. 1 in more than one national poll. The other similarity is that neither team started out that high in the state or nation. Both moved up toward the top as each season unfolded.

“What really separates Buchanan is they ALWAYS put nine solid players in the field,” longtime Fresno Bee prep editor Andy Boogaard said. “And what a luxury to pitch there because their defenses are typically phenomenal.”

Many players come back from that squad for this season, which puts the Bears in the more unfamiliar role of having to go wire-to-wire as the state’s No. 1 team. However, the one huge graduation loss was pitcher/first baseman Grant Gambrell, who is now at Oregon State.

A finalist to be the Mr. Baseball State Player of the Year, Gambrell led Buchanan by going 12-0 on the mound with a 0.69 ERA. He also had 72 strikeouts in 71 innings and led the Bears offense by batting .363 with five homers and 35 RBI. It might be accurate to say that had Carlsbad-La Costa Canyon’s Mickey Moniak not been the No. 1 pick in the MLB Draft, Gambrell would have been State Player of the Year.

“You just don’t replace a guy like that,” Donald said. “He left his mark as one of the all-time best players from around here. I’m just hoping the juniors we had at the time were paying attention to the way he worked and are now preparing for this season just like he did before last season.”

All-State shortstop, Jamal O’Guinn, puts down a tag to retire Hanford West’s Noah Perez during a game on Feb. 25.

As the only team in the state with four players selected to the annual Cal-Hi Sports All-State Underclass teams (30 on first team, 30 on second team), it became easy to anoint Buchanan as the preseason No. 1 team for California this season. Nationally, the Bears are starting in the top five in just about everyone’s rankings.

“Our coaches stress all the time not to worry about those things,” said senior shortstop Jamal O’Guinn, who has signed with USC. “The important thing is just to have the target on your back get bigger every year. We just want to go into every game, try to win every game and whatever happens, happens.”

O’Guinn was one of those all-state underclass players. He began his prep career as a freshman and sophomore at Sanger and transferred to Buchanan as a junior.

“I went from good coaching to the best you can find in the nation,”said O’Guinn, who hit .343 with 25 RBI last season. “You can go to a lot of colleges and will not get the coaches you get here. Except for one or two, every coach played pro ball. They’ve been through it all.”

O’Guinn’s infield mate at second base, senior Quentin Selma, was another of the all-state underclassman. Selma, the team’s leading hitter as a junior at .443 and with 29 RBI, will play at Cal next fall.

The other two with all-state credentials are senior catcher Zach Presno (signed by Fresno State) and uncommitted senior pitcher Hunter Reinke. Presno led the Bears with six homers last spring while Reinke went 11-0 with a 2.20 ERA and struck out 58 in 63.2 innings. Reinke also previously had been reported as an Oregon commit.

To be as highly regarded as it is, Buchanan also has to have more than just those four, and it looks like Donald does.

Pitcher Carson Olson had a more limited role last season, but put together a great summer and earned a scholarship to Cal. Outfielder Jake Renteria also has stepped up and will be headed to San Jose State, while great things are also expected from sophomore infielder Brady Homel.

“Brady’s been one of our top hitters in our first three games,” said Donald, whose squad won those games 13-3, 13-2 and 11-2. “This is also the deepest outfield we’ve ever had. It’s highly competitive for the three spots.”

Three new players who have moved into Buchanan’s boundaries are sophomores Miguel and J.D. Ortiz and junior Alex Ortiz. They are all sons of former major leaguer Jose Ortiz, who also was once MVP of the Pacific Coast League for the Sacramento River Cats in 2000.

Quentin Selma, left, and Zach Presno share a moment in the dugout during a lopsided win over Hanford West.

There has been grumbling from coaches in other parts of the state about Buchanan not going out of its area last season to play a more challenging schedule. In one sense, though, the Bears don’t have to due to the strength of the Tri-River Athletic Conference in which they compete. Historically over the years, TRAC teams usually don’t go 30-1 or 30-2.

And when teams from the TRAC do pile up wins and then claim the CIF Central Section title, they can naturally be ranked high. In fact, on the all-time list of State Teams of the Year, Buchanan doesn’t even have the most No. 1 finishes among Clovis schools. That would be Clovis High with three in 1997, 1998 and 2014.

“We did go to the Boras (Baseball Classic) two years in a row and did well, and this year we are going to the National Classic in Southern California,” Donald replied when asked about the strength of schedule. “And our conference does really prepare our teams to compete. Here you have to bring your A game for every pitch in every game. There’s not a patsy to be found.”

Clovis North was the only team, after all, to get a win against the Bears last season and should be formidable again in 2017. Clovis — led by one of the state’s all-time winningest coaches in James Patrick — is loaded, and there’s always battles against Clovis West and Clovis East. James Patrick’s sons, Chris and Kevin, are the head coaches at Clovis North and Clovis West, which just brings more attention when Buchanan is playing one of them.

“It is nice to be recognized like we have been, but the reality is that we don’t talk about it with our players at all,” Donald said. “It only matters where you’re ranked at the end of the season.”

Mark Tennis is the co-founder and managing editor of Cal-Hi Sports. See more of his content at calhisports.com