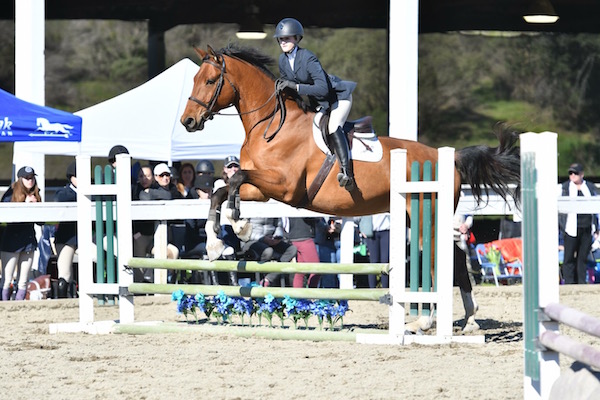 Equestrian riding might not to be among the first sports to come to mind when it comes to middle or high school interscholastic competition. But it is alive and well. And there’s an East Bay equestrian team that’s getting awfully good at it.

Team KMT, run by Kelly Maddox Training out of the Shiloh West Equestrian Center on the border of San Ramon and Castro Valley, sent its entire Middle School team and a pair of High School individuals to the Interscholastic Equestrian Association National Championships at the end of April.

“That was really an impressive feat,” Maddox said of her two young riders. “They’ve (all) done really really well. …

Each year I feel like we’ve gotten better and better. We’ve attended nationals before with individuals. This was the first year we qualified a full team.”

The riders do not get to compete on their own horses. The animals at each event are provided by local stables and paraded for the riders in the morning, allowing the competitors to take notes on each one for a lottery draft that takes place prior to the competition.

This emphasizes the rider’s mental focus and his or her skill at adjusting to the animal they end up riding.

However, the greatest emphasis being encouraged by IEA events is teamwork. It’s that particular element that Team KMT riders immediately note when talking about their experience.

Maddox credits teamwork for their success

“One doesn’t think of horseback riding as a sport for the most part. And when they do, they think of it as an individual sport,” said Taylor Beasley, a Piedmont High senior who just finished her fourth and final year on Team KMT.

“This program is able to promote team mentalities while still using all the muscles that come with riding.

Because of how events are scored, you’re riding for your teammates as well as yourself.”

As a co-captain for KMT’s high school team, Beasley helped mentor several of the middle school riders who performed at nationals. She couldn’t have been more impressed.

“I think that has been one of our strongest years as a team all together,” Beasley said.

“Most of the students who went to nationals don’t get to go to big rated horse shows. To see them be able to go and be successful alongside the best riders in the nation, it made me really proud.”

Kleber, who is about to complete her sixth grade year at San Ramon’s Windemere Ranch Middle School, was only in her first year as an IEA rider.

“I thought it was really fun, because you weren’t just riding for yourself,” Kleber said. “We were riding for our team and it became like a family.”

Kleber was born in New York and fell in love with horses after moving to Kentucky at the age of 5.

Her family moved to California approximately three years ago.

With the IEA Nationals being held in Syracuse, N.Y., she had the potential of having the largest individual fan base among out-of-state riders. Though her family encouraged many of the relatives to root from home by watching the live stream of the event.

“Everybody wanted to come up,” said Kleber’s mom, Susan. “We thought that might be a little too much pressure on a 6th grader in her first national event.”

Sydney Kleber handled any the pressure she did feel just fine.

“It was way more than what I thought it would be,” she said. “It was such a huge facility with tons of other girls from across the country. Everyone was so supportive.”

That first year included just 10 total riders. This season the roster topped out at 25 with riders representing several parts of the East Bay.

“It’s been a lot of fun,” Maddox said. “It’s really changed how I look at the business.”

To learn more about Team KMT or IEA, visit KellyMaddoxTraining.com.