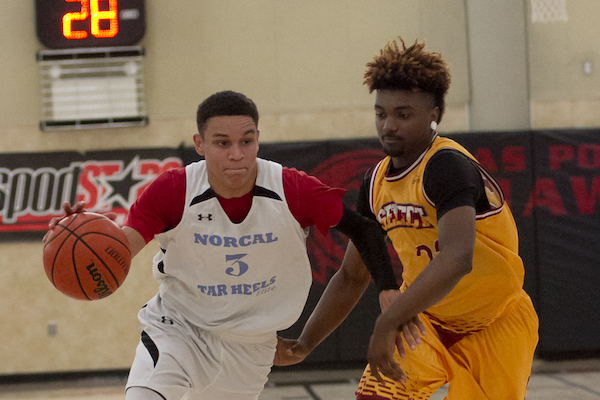 Success doesn’t often come easily for a fledgling basketball team. But the startup NorCal Tar Heels AAU program already is getting some.

At the NorCal Sports TV End of Summer AAU Head 2 Head Showcase, the Tar Heels under-16 team shined in the spotlight. On Aug. 5, day one of the two-day event, they defeated the Oakland Soldiers 86-69 at Las Positas College in Livermore.

The program, comprised of athletes from the Stockton and Lodi area, is just five months old. And what makes it more impressive is how they handled the Soldiers.

Yes, the Soldiers program that once counted a young LeBron James as a member. And Leon Powe and Kendrick Perkins as well. It’s a long list, quite lopsided in comparison to the Tar Heels’ very brief history. But the NorCal team may be on its way to starting a strong reputation of its own.

“This was important, coming out here and performing like we did, because it let us know where we sit as a program,” said coach and founder of the program Anthony Bell.

In a similar vein, this summer event was a starting point as well. NorCalSportsTV also initiated its All-Star Games at Las Positas in April and the NorCal Asian-American All-Star Games at Cal State East Bay in Hayward in June. The organization aims to make the late-summer showcase a staple as well.

With the End of Summer Showcase, he wanted to give the focus to one game at a time.

“We wanted a regulation-style feel; one game goes on at a time,” Aye said. “And the players get media experience with post-game interviews and press conferences.”

The aim was to depart from what Aye had noticed in the past when he was live-streaming tournament games.

“I noticed it wasn’t very fan-friendly; lots of games were going on in the same place. It was difficult to live-stream,” he said. “We wanted to get something together where the community could know when and where a certain team was playing.”

Citing a lack of club basketball opportunities in the Stockton area, Bell put together a team of players from Lincoln, Edison, St. Mary’s, Weston Ranch and Brookside Christian in Stockton and Lodi High. He said the program is going to expand to age groups as young as 8-and-under.

“I was a little worried because we were missing four players,” said Bell, who is also the coach at Brookside Christian. “But we rallied with the eight players we had.”

El Cerrito High’s Kamari Smith paced the Oakland Soldiers with 22 points in the loss to the Tar Heels.

The Soldiers also were without players, including Salesian standout twins Jovon and Jadan McClanahan. And after the Sacramento Magic cancelled at the last minute due to a lack of available players, the Soldiers admirably agreed to play in a second game immediately after their game with the Tarheels.

“I think we played aggressive,” said Reed, who will be a junior at Lodi High this fall. “We just kept it up through the whole game, even when they made their little runs. We fought through it.”

In an earlier game in 17-U action, YBA took a 77-65 win over Seaside. Adam Orr of Ponderosa-Shingle Springs (28 points, including six 3-pointers) and Kai Huntsberry of Placer-Auburn (19 points, 11-of-15 free throws) shared Player of the Game honors.

“My teammates got me some open shots so that made it easy,” said Orr, who is in his fifth year with YBA (Youth Basketball Academy).

Huntsberry experienced an unexpected taste of life in the Bay Area: getting caught in traffic. Arriving at the end of the first quarter, he still contributed heavily to the win. YBA could ill afford to be any more short-handed, with just six playing on Saturday.

“When I got here, we were down, and it looked like we didn’t have enough energy,” Huntsberry said. “Our teammate, Blake (Greeslee, of East Union-Manteca) did a real good job of picking the energy up and hustling, and we all just picked up on it.”

Showcase games are being streamed at www.norcalsportstv.com.