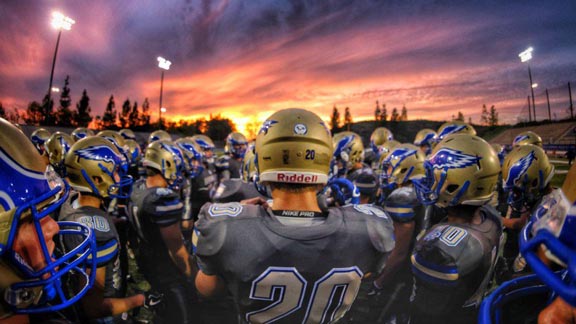 Writing Book On State’s Football History A Labor Of Love

It wasn’t exactly a blank canvass, but writing the book “High School Football In California” was a task that quickly became pleasurable.

Especially when talking to some of the subjects who were targeted to be centerpieces of most chapters.

The first book of its kind — and by that meaning, a book that encompasses the entire state of California.

All high schools that have ever played football and all years going back to before the turn of the 20th century — went on sale on Aug. 7 at online retailers and major bookstores.

It went to No. 1 in the world on Amazon.com among teens and young adults in football within a couple of days.

So, it appears that doing something like a California high school football book was done at the right time.

In researching the book, after it was agreed to write it, other state high school historical books were looked at. All were interesting in their own way, but didn’t feature too many interviews of key historical figures.

The publisher of my book, Skyhorse Publishing of New York, originally contacted legendary Los Angeles Times prep sports writer Eric Sondheimer to write it. Eric, a longtime colleague, graciously sent them to me due to his own time constraints and the fact that a great amount of his prep football expertise is for Southern California.

In agreeing to write the book, the contract stipulated a minimum of 50,000 words. That also was a magic number for me because there was no guarantee that writing 60,000 or 70,000 would provide any additional income.

The editor I was working with, Julie Ganz, who is based in New York, said the vision of the publisher was that the author should have interviews for most of the chapters. Other than that, it was up to the author to decide on the topics and who to interview.

Since I also wanted to infuse my own experiences with covering California high school football for nearly 40 years into the book.

I quickly decided I wanted the book to with a chapter about the most inspirational coach/person I’ve ever met so far in my career: Los Gatos head coach Charlie Wedemeyer.

He was the coach of the Wildcats in the early 1980s who continued to coach the team despite the destruction caused to his body from ALS. Also known as Lou Gehrig’s disease.

I figured it would be easy to contact former Los Gatos assistant and later a longtime head coach of the team, Butch Cattolico.

That’s because Butch is still coaching as an assistant with his son, Joe, at Sheldon-Sacramento.

I later found out that my good friend at the 49ers Cal-Hi Sports Report, Robert Braunstein, was in contact with Charlie’s widow, Lucy.

Eventually, I talked to her as well and only made telling the story of Charlie and Los Gatos’s amazing 1985 season that much more vivid.

Connecting other topics with other individuals who could talk about them was easy in some respects and more difficult in others.

Trying to find parents of a former top player to talk about how their son worked his way up to the NFL? Didn’t happen.

Jack was awesome to talk to and the chapter he’s featured in turned out to be one of my favorites.

Having written and edited magazine articles, some of them 2,000 words or more, during an 11-year career with Student Sports from 1993 to 2004 ended up being very valuable to the book.

Every chapter in essence was a feature article.

But, a feature article attached to another one in a grander landscape of California high school football.

Many folks have wondered why there wasn’t a photo of a De La Salle player or someone like Jake Browning of Folsom on the cover.

It was considered, but the publisher was looking for a photo that would be more reflective of a Friday night game anywhere in the state. Those kinds of images also aren’t dated in any way.

They work in 2018, they’ll still work in 2020 and for years beyond when the book is primarily only available at a local library.

I found what I thought was the perfect image on the SoCalSidelines.com website last fall taken by Roger Clay, a freelance photographer in Orange County.

But, you wouldn’t know that unless you attended the school or one that that regularly plays the Eagles, or you have just read this column.

FootballMP
← Previous Story City State Of Mind: Galileo Back For More After 2017 State Title Shocker
Next Story → Behind the Clipboard: Coaching is Teaching, Really.