Fun at the Fort. Cycling League Gets its Pedals Grinding 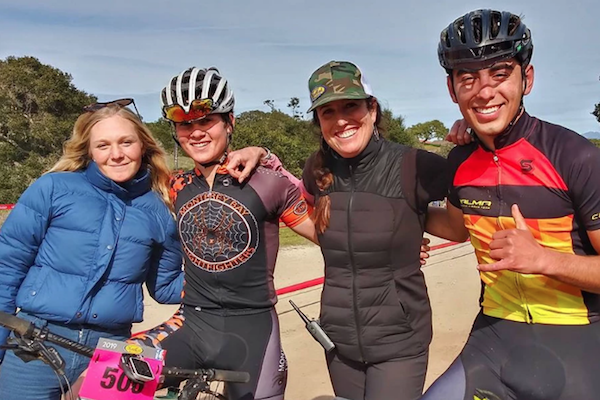 After a long, rainy winter the warm sunshine and blue skies of Monterey were a welcome change of pace, and the perfect setting for Race #1. Fun at the Fort. High school student-athletes were treated to near perfect trail conditions with ribbons of sandy singletrack winding through the coastal chaparral, live oaks dripping with Spanish moss, and early signs of spring.

The 2019 race season launched out of the gate with approximately 1500 registered student-athletes, from 84 teams. That meant the NorCal League experienced a whopping 35% growth between 2018 and 2019.

That growth is represented by the largest number of new teams they have seen in over ten years: 14 new teams. Additionally, many of the D1 and D2 squads grew their ridership significantly. Sweet!

The weekend of racing kicked off on Saturday underneath sunny skies, and the crowds that lined the start line were unbelievably robust and excited. The girls fields were the first to roll off the line, but not before Kyra Teigen, JV athlete from the Berkeley High School Yellow Jackets, sang a beautiful rendition of the National Anthem. Interestingly, the South Conference JV girls’ category was the largest of all of the girls’ categories for the weekend, with 42 participants.

In an attempt to lighten the pre-race nerves and to remind everyone that although they are there to compete, more importantly, they are there to have fun, we welcomed the NorCal “stoke captain” to the start line in all of his super hero red spandex glory.

He serenaded the varsity shredders with one of his original, quirky songs and shouts of “we love the stoke captain” were heard coming from many of the girls and spectators. Stokey, as we often refer to him, takes pride in what one Salinas High varsity girl explained as, “taking pressure off of us at the start line by being goofy and ridiculous.”

The top three varsity girls, Gabriella Dube (1), Madeline Hill (2), and Isa Hoffman (3) were within seconds of each other for the majority of the race. The fourth and fifth place riders Maria Wallis and Eleanor Mendoza ticked the pedals over in almost exactly the same cadence for the entirety of the race.

It was San Ramon Valley athlete Gabriella Dube who took the win with an eventual 45 second lead over second place. Dube reflected, “It was exciting to get back on the start line with all the NorCal girls yesterday! My goal was just to give it my best effort and have a good time, but it was cool to see all the pre-season training finally come together for a win. It was a fast race with a new group of girls so no one really knew what to expect; I’m looking forward to the rest of the season with this fast group.”

Both the JV winner from the Monetery Bay Lightfighters, Lux Goetz, and the freshman winner from Salinas High School, Kirsta Urquides, cranked their way to winning their respective categories. Each with impressive two-minute leads over the field.

Sophomore Ella Peterson from Oakland Composite rounded out the podium with her first place finish, and got to pull on the coveted black and pink leader jersey for the first time this season.

Next up, the sophomore and freshman boys to rolled out for their first two laps of the season. David Hershberger from Salinas High was able to crank through his hometown course and secure the victory. The remaining top 4 steps on the sophomore D1 podium were stacked with Berkeley High riders.

In D2, Kyle Dommaschk from Hayward Composite was able to narrowly secure his first place win with just 4 seconds over second place. At the end of the race it was Axel Rodriguez, Berkeley High, and Nathan Vahlberg, Black Mountain Composite-North who won the freshman categories.

Last, varsity and JV athletes lined up, as the crowds collected at the start line and on Lightfighter Hill.

With four laps to complete, a varsity NorCal race is as hard as any adult cross country mountain bike race in the country. Add to that fact that a number of NorCal varsity athletes [girls and boys] are also competing on the national level in both mountain and road cycling, and you have some of the most powerful and competitive racing in America.

The top five varsity racers were literally on one another’s wheels for the entirety of the race. Mathew Saldaña from Palma School took the win at the end of the day. According to Matthew, “We set a blistering pace from the start and we all shared in the workload. I was able to power away on the last hill and got the win. It’s certainly a proud thing to race against such great competitors and excited to see what the future races will bring. I also want to thank my coaches and teammates for their support and extend a heartfelt thank you to the Salinas Cowboys for allowing us to train with them.”

On Sunday morning, North Conference teams began to roll into the venue bright and early. Many were brand new to the NorCal League. Officials were especially excited to meet the new North State Composite team, as they are composed of student-athletes from Chico and Paradise, many were directly impacted by last summer’s Camp Fire.

A new coach from another brand new team said, “Wow, I had no idea the size of this thing! This is like a NASCAR event. Do we have to have a branded trailer because we aren’t really ready to do that yet.” No sir, no fancy branded trailer needed, just a good attitude and a bike in working condition.

While the varsity girls lined up, the pit zone again emptied as everyone raced to the sidelines to cheer on some of the most accomplished female mountain bikers in the state.

According to race director Coco Ramirez, “It was simply awesome to see the level of support there was for every single wave of riders last weekend.” The entire Granite Bay High School team took on the challenge of singing the National Anthem. That set the stage for another full day of stellar sporting behavior, camaraderie, competition, and fun.

The first lap of the varsity girls’ race saw the top four athletes racing neck and neck, their times across the finish line for the first lap were almost identical.

Third, Haley Randel, Redwood and fourth, Audrey Fehlhaber, Drake did too! In the end, Gladiators athlete, Grace Murphy secured the win for the day.

Grace reflected that, “My trail to the 2019 opener began at the end of last season. If I was to join the top riders I would need to increase my endurance, improve my skills, and gain confidence. Through the summer and fall I was on my bike. Team practice began in December. I rode and rode and rode more. Mostly alone, but often with the friends I made through the NorCal League. And then it was time. Race day. A million thoughts in my mind, but only one question. Could I race with the best? My nerves were calmed with encouragement from teammates and coaches. The cheerful goodwill banter among the players at the staging area was familiar and welcoming. We’re off! Riders blistered up the hill. Haley, Meigan, Audrey and I got away on the first lap. Round and round and up and down we stayed together all the way to the finish. Question answered. I stayed with the best. In the end I edged out Meigan. Expect more riders joining the mix—the season has just begun. Thrilling!”

Junior varsity athlete Elizabeth Odell came out swinging for herself and her Humboldt Composite mountain bike team. “Summer of 2017 I was super motivated to train a ton in order to move up on the podium. But it just backfired on me and I had to miss last season. In the last year, I’ve been focusing on making riding fun again and not worrying about how fast I am. Getting back to racing was the real win for me today.”

This year, the NorCal League made a small change to the race format, swapping the division that starts each race. D2 got it’s chance to line up before D1 and the stoke on the D2 sophomore boys’ faces was contagious. NorCal also welcomed a new crop of freshman to the scene. They lined up right behind the sophomore category, ready to shred their first two laps of what should likely be the most challenging sport in high school.

Ready to test his strength in varsity, Redwood rider, Soph Sean Middleton petitioned the Rules Committee to move him up. After reviewing his impressive race results, his petition was approved. Looks like the committee made the right call, as Sean ended up winning his first varsity race on Sunday! According to Sean, “I had no clue what was going to happen going into the race. I’m totally stoked and a little surprised that it went so well. I got a little separation from Sean Dickie at the top of Lightfighter Hill toward the end of the third lap. I decided to push it to see if I could build a gap. Super happy that it worked out.”

A NorCal course marshall sent this message post race. “It stood out that the A-team (Drake and Marin Catholic included) were calling out ‘passing’ in very friendly tones on the climb just after the road crossing. When I cheered them on, each said “thank you” and smiled. That cracks me up because, well they’re racing. It was awesome to see.”

The collective enthusiasm of the weekend was palpable, and certainly helped to make it not only memorable, but wildly successful.

The theme of this next race’s team spirit competition is “aloha”. The team with the best aloha spirit (and outfits and pit zone decorations) will also make it on the podium.