Ionescu Makes Most Of Time To Shine | SportStars Vault: April 2016 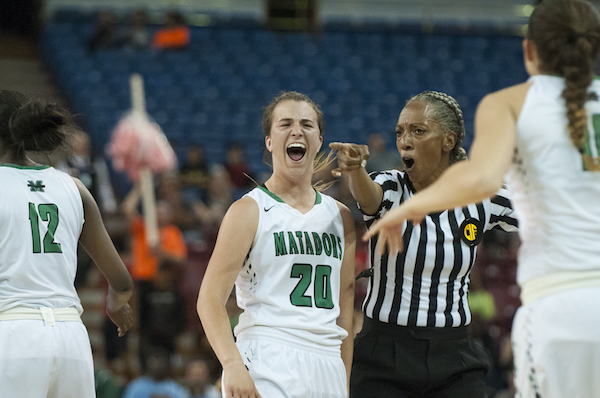 BRYSON: Sabrina Ionescu Closed Out Her Miramonte Career Like Other Former Bay Area Hoop Standouts — By Shining Brightest On The Biggest Stages •

SportStars Vault: SportStars editor Chace Bryson wrote this column on Sabrina Ionescu for SportStars Magazine’s April 2016 issue. Four years later, it’s been dug out of the vault following Ionescu being the No. 1 overall selection in the WNBA draft. We hope you enjoy this trip down memory lane with us. An earlier 2014 feature on Ionescu has also been made available.

Since the dawn of the SportStars Era in June 2010, the Bay Area has given us some incredible basketball players. Both boys and girls — to follow and report on.

A handful of these players were able to capture state titles during their prep careers. However, a greater majority had dreams dashed in the regional tournament or lopsided state finals defeats. When you cover elite talent, you want to see that special player play his or her best when the stage is biggest.

Gordon won two Division II titles as a sophomore and junior; Rabb and Chidom both were able to go out as state champions. Rabb’s 21 rebounds remain an Open Division state championship single-game record.

This year’s McDonald’s darling of the Bay Area was Miramonte–Orinda girls talent, Sabrina Ionescu. While she entered her senior year already highly decorated  — she had a pair of world championship gold medals from multiple stints with the U.S. Youth National Team, and helped anchor a CalStars Elite club team roster that went 59-1 and won the 2015 summer title. But until March, her path to a high school state championship had always been blocked by nationally-ranked St. Mary’s-Stockton.

Then on March 15, Pinewood upset the Rams 72-69 in the NorCal Open Div. semifinals. It not only opened up a path to the state final for the Matadors; it also set up the chance for Sabrina Ionescu to perform on the biggest stage for high school players in California.

And Ionescu took advantage. After helping defeat Pinewood in the regional final, Ionescu put up a triple-double of 24 points, 10 rebounds and 10 assists in the state championship game. She also scored on a dramatic 30-footer as the horn sounded at the end of the first half. Being that it came in a losing effort (80-71) against a very good Chaminade-West Hills team makes the performance slightly bittersweet, but still very memorable.

Sabrina Ionescu rises for a jumper in the CIF Open Div. NorCal championship against Pinewood.

Then just a few days later, Ionescu — who is reportedly going to choose to play collegiately at Oregon, Oregon State or Cal — went on to shine in the McDonald’s All-American Game on April 2. She scored 25 points to set the single-game scoring record in the event. And was named the game’s MVP after leading the West to a 97-88 overtime victory. She hit seven 3-pointers in the game and also grabbed 10 rebounds. All of which made us proud of our choice to put her on our 2015-16 Basketball Preview cover last November.

But what made us happier still was seeing Ionescu close out her career by showing the state — and then the nation — what everybody in the East Bay has known for some time: She’s legit.

At this point, we’re officially spoiled. Who might carry the Bay Area basketball torch next? Whoever it is, we’ll be there to fill you in.