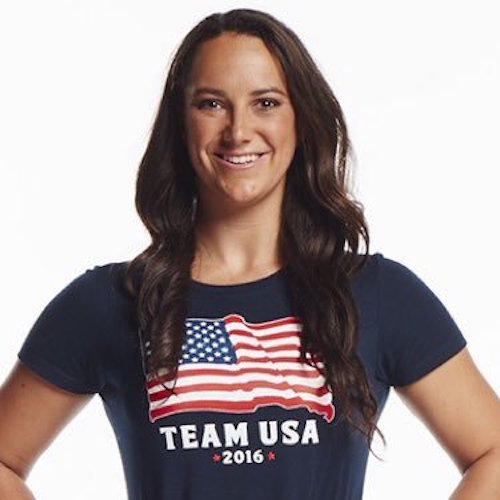 In her senior year at Monte Vista-Danville, it was already evident that Maggie Steffens was going places. Two years later she wears an Olympic gold medal in water polo. This is our cover feature from Oct. 28, 2010.

Maggie Steffens doesn’t get nervous. Not in the pool, anyway. Not while clawing and kicking and scratching and treading with highly physical and competitive aquatic athletes, and while tossing around that slippery but grooved 15-ounce, 66-centimeter yellow sphere known as a water polo ball.

This has always been Steffens’ domain.  It’s her frantic, whistle-laden sanctuary, a place she was bred to play, where her father and three elder siblings all excelled and where she first entered the fray before the age of 5.

This is where the strong 5-foot-10 Monte Vista High senior all-around finds home, where she finds chaotic peace, even in the most pressure-packed situations.

“Pressure is something we all have to deal with and to me I try to think of it as fun,” she said. “Like the last-second shot. Who is willing to step up to the plate and take it? That’s fun.”

But in July, at La Jolla High when USA National Team coach Adam Krikorian calmly instructed, “Maggie shoots fifth,” Steffens could have coughed up some chlorine and no one would have blamed her.

Steffens didn’t even blink, but inside, for the first time in years, she had to compose herself.

This was a shootout in the gold medal match of the 2010 FINA World League finals against Australia. This was Steffens’ first competition with the senior national team and at 17, she was the baby of the bunch.

The team had a 33-year-old in fact, and most of the U.S. players were in their middle 20s. But Krikorian picked “the kid” for the “all-or-nothing” position. The possible red-hot 5-meter spotlight where a match could all be won or lost.

Steffens is a Great Competitor

“(Steffens) is a great competitor,” Krikorian would say later. “She’s just going to (always) leave it all out there.”

Indeed, both squads converted four shots before USA goalie Betsey Armstrong made a save – setting the stage for the Alamo youngster.

To calm herself, she drew upon her past, her foundation, back to her family days when she and her siblings would play keep away from their dad Carlos, a former Cal and Portuguese national team water polo member.

“I honestly was kind of scared,” said Steffens, who doesn’t admit easily. “I just told myself ‘I can do this.’ I thought of my family and what my dad would tell me. He always said (in shootouts) to not touch the ball and stay loose. Be slow and collected.

“Once I got in front of the goal I stopped thinking and just waited for the whistle.”

The whistle blew and Steffens, who hadn’t scored in the tournament, calmly picked up the yellow ball and in one composed but athletic motion, skipped it into the lower left corner.

Steffens immediately freestyle’d to her right and was mobbed by her teammates. The large crowd began chanting “USA! USA! USA!”

“The Kid” made her coach look smart. “(Maggie) has no fear,” Krikorian said. “I felt very confident with her out there and putting her last. She’ll remember this for a very long time.”

Said Steffens: “That was definitely a rush. That was so cool.”

Steffens Selected the USA Today National Athlete of the Week

Steffens was selected the USA Today National Athlete of the Week and local reaction to the award and her title-clinching goal was met with an interesting mix of thrill and non-surprise.

“When I heard it was like, ‘Well, that’s Maggie,’” said Cal freshman, childhood friend and former Monte Vista teammate Kelly Mendoza. “When she wants to do it, it just happens.”

Said current Monte Vista teammate, senior Katy Tomalenas: “You just expect that stuff from Maggie. She’s someone who just gets it done.”

O’Toole-Purcell, one of the most decorated female water polo players in the world, saw Steffens’ success coming long ago.

She didn’t hold back then and doesn’t now.

“I used to tell people when she was 8- or 9-years old that Maggie was going to be the best player in the world,” O’Toole-Purcell said. “She’s just that talented. She’s just that gifted. And she’s right on pace to back that up.”

O’Toole-Purcell can speak from authority. She was recently inducted into the Inter- national Swimming Hall of Fame. She was also a six-time World Water Polo Female Athlete of the Year and competed in seven World Cups, winning Gold in 1979.

Out of Water Polo Retirement

Remarkably, she came out of retirement at the age of 39 to earn a spot on the initial USA Olympic team in 2000. It took three years of full-time training to prepare for the Olympics. Her daughter Mendoza was 8.

“That (the training and preparation) was brutal,” she said. “The final eight weeks was like running marathons on consecutive days. I’m not kidding.”

Knowing the eventual benefits of strain, O’Toole-Purcell had no trouble dishing it out to her to young water polo prodigies, Mendoza and Steffens.

As eight-year-olds, they often played tournament not only against boys but also skilled and physical 14-year-old club-team girls.

Said Mendoza, currently a junior national player: “I would cry every time we had to play the older kids.”

Besides, Steffens was used to competing against older and better competition. Her sister Jessica, 23, starred at Stanford and made the 2008 Olympic team and plays currently with Maggie on the national squad, though is recovering from shoulder surgery.

Brother Charlie, 21, is a senior co-captain and two- time Academic All-American for Cal. Teresa Steffens, 19, starred at Monte Vista and made the Cal water polo team before giving it up to focus on academics.

All helped push, inspire and even punish little sister, who in-turn returned the favor to any older kids messing with Mendoza.

“One time when I was 9 and Maggie was 8, some 14-year-old was playing dirty and kicking and scratching me,” Mendoza said. “Maggie saw me crying and said ‘What number is she? I’ll take her.’

“Maggie then got the ball and just killed her on a counter.”

When Steffens returned, Mendoza asked her ‘What did you do to that girl?”

Steffens said: “I took her through the washing machine.”

Said Mendoza: “Coming from an 8-year-old, that sounded pretty funny.”

There was nothing all that humorous about what Steffens and Mendoza accomplished at Diablo. Along with a strong supporting staff — O’Toole-Purcell estimates that eight are currently playing collegiately — Diablo won countless national titles.

By the time Steffens and Mendoza were 15, they were tagged “Jordan and Pippen.”

“Kelly is a great, great player and she pushed me every step of the way,” Steffens said. “She’s a great friend, too.”

O’Toole-Purcell described the duo this way: “Kelly was probably more defensive and Maggie more offensive. Kelly does the little things you don’t really notice. She’s really smooth. Maggie is simply more dynamic and aggressive. To the naked eye you notice everything she does.”

And, quite frankly, Maggie does it all.

“She sets at two meters,” O’Toole-Purcell said. “She guards at two meter. Maggie drives. She shoots outside, she sees the entire pool. She just has a great feel for what’s happening. She’s just a step ahead of everyone else.”

Maggie’s Everyone to everybody

Compared to Jordan by her club coach, Getty said Steffens also is like Magic Johnson, feeding teammates, playing with joy and making every one better.

The Mustangs are by far the class of the North Coast Section, having won four straight titles and six of seven. With 19 straight wins to start this season, a fifth straight crown appears imminent.

“(Maggie) could care less about the individual accolades,” Getty said. “I have no idea as much as she’s accomplished how she maintains a level head. With all the fame and spotlight, she’s just not into it. She’d rather set someone else up.”

Steffens at the Western States Tournament

At the Western States tournament in Modesto, the Mustangs faced an overmatched Sonora team so Steffens set a goal to get everyone to score. Eleven did in a 15-3 win.

“That’s Maggie being Maggie,” he said. “She wants every- one to be involved.”

And when things are stressful, not often this season during so many lopsided wins, Steffens is at her best.

For example, trailing 3-2 after the first quarter in a big match early, Steffens sensed the team’s tightness and pulled the Mustangs together.

“Let’s just go out and have fun and stop stressing,” she told the team. “Remember it’s just a game and games are meant to have fun.”

As a result, Monte Vista rattled off 10 straight goals to win going away.

It’s that kind of levity that makes Steffens “hands down the best kid and teammate I’ve ever been around,” Getty said.

The fourth-year Monte Vista head coach raves about her athleticism — “if she was a soccer or softball player she’d be the best player around in those sports, too,” he said – but what he marvels about is her balance, charm and leadership.

That’s another reason why every college in the country is after her, but she is totally mum about what that choice will be.

“Yes, she’s intensely driven, but when she gets out of the pool, she’s the funniest kid on the team,” Getty said. “It’s hard to believe, but she’s somehow everyone to everybody. She’s got it all.”

Furthermore, Mendoza says the same thing. And that’s after being a teammate for almost a decade. “I mean she’s really hilarious,” Mendoza said. “She’s got this great personality and is such a free spirit. She also has such a great presence. No matter who you are she’s approachable. She cares about you. Add that plus she’s gorgeous and really, really smart, and what’s not to love?”

She’d love the duo to reunite at Cal, but like everyone else — “We’re all waiting to see where she’s going to pick.”

Steffens is also reluctant to toot her own horn, barely acknowledging her strengths. She does appreciate her gifts. She said her success in the pool wasn’t ingrained or forced upon her by her family. As a result, they simply inspired her.

“I just look up to my siblings,” she said. “They’ve been my inspirations and role models.”

She admits that she’s had a love-hate relationship with the game.

“I liked it right away and made a lot of friends and enjoyed the social aspect of it for sure,” she said. “But water polo can take up your life. Luckily, I’ve just always had a passion for it.

“I guess what I love most is just how competitive it is. It challenges you both mentally and physically. It just naturally drew me in.”

When people like O’Toole-Purcell say she could be the best in the world at it, Steffens doesn’t tighten up.

Just like her game-winning goal against Australia, she calms herself, draws from the past, shoots and scores.

“(Those expectations) help empower me,” she said. “They spark my fire.” ✪